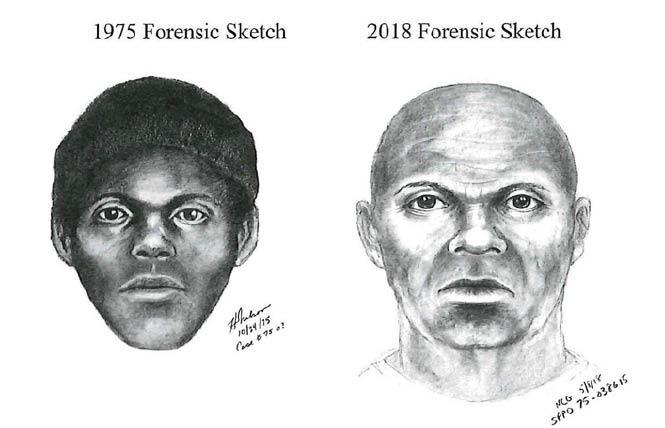 The original 1975 sketch of the "Doodler" suspect, left, was updated in 2018 using age progression to show what the man might look like today. Illustration: Courtesy SFPD

San Francisco police are doubling the reward money being offered to solve one of the city's most infamous cold cases that involved the killings of gay men.

It was announced January 27 that $200,000 is being offered for information leading to the arrest and conviction of the "Doodler," who is suspected of killing six gay men in San Francisco between January 1974 and September 1975.

Only five deaths had been attributed to the Doodler until Thursday, when it was announced that "as a result of a new investigation," it is now believed that the serial killer is implicated in the death of Warren Andrews, a 52-year-old lawyer.

Andrews was found unconscious after an assault at Lands End on April 27, 1975. He never regained consciousness and died several weeks later.

The dual announcements come on the 48th anniversary of the discovery of the Doodler's first victim, Gerald Earl Cavanagh, a 49-year-old Canadian immigrant whose body was found fully-clothed, lying face-up at Ocean Beach. He had been stabbed and had defensive wounds.

The Doodler may have killed as many as 16 gay men, according to a 2019 Bay Area Reporter story. At the time police offered a $100,000 reward and a sketch showing what the Doodler might look like today.

The Doodler's modus operandi was to target gay men in the LGBTQ Castro district and other places, luring them into sexual encounters then killing them and leaving their bodies in parks and beaches around the city. He is described as Black, about six feet tall, and looked to be between 18 and 25 at the time of the killings.

All of the victims were white, gay males and were found on the city's Westside: three at Ocean Beach, one at the Spreckels Lake Model Yacht Facility in Golden Gate Park, one at Lincoln Park (best known as the location of the California Palace of the Legion of Honor), and the aforementioned Andrews at nearby Lands End.

At the same time as the Doodler murders, in July 1975, there were two attacks on gay, white males within a two-week period at the Fox Plaza apartments. Though both victims lived on the same floor, they did not know one another.

San Francisco Police Department homicide inspectors determined at the time that there was a connection between the Doodler murders and the Fox Plaza attacks.

"One of the survivors from the Fox Plaza attacks had met the suspect after the bars closed in July of 1975 at the Truck Stop diner near Market/Church St.," the SFPD stated in a news release January 27. "The suspect was drawing animal figures on a napkin. The suspect commented to the victim that he was attending art school and was studying to be a cartoonist. The victim believed the suspect to be skillful in drawing as he himself had a background in art."

Several months later, in October 1975, this victim — who spent "the most significant amount of time" with the suspect compared to any other known person — provided information that generated a composite sketch of the suspect believed responsible for the Fox Plaza attacks.

"Soon after, a phone call was made to police with a name and a vehicle plate of a suspect," the release continues. "After this call, additional citizens contacted police with information naming the same suspect. The person named was interviewed by SFPD Homicide in January 1976 and he was considered a strong suspect. This same person interviewed by police in 1976 is still the focus of our investigation in 2022. We believe there are other persons who may have survived attacks by this same suspect or may have information regarding this suspect and these attacks."

The SFPD Homicide Detail is actively working this cold case investigation and anyone with information is asked to call the SFPD 24-hour tip line at (415) 575-4444 or Text a Tip to TIP411 and begin the message with SFPD.

SFPD may have a break in 'Doodler' cold case