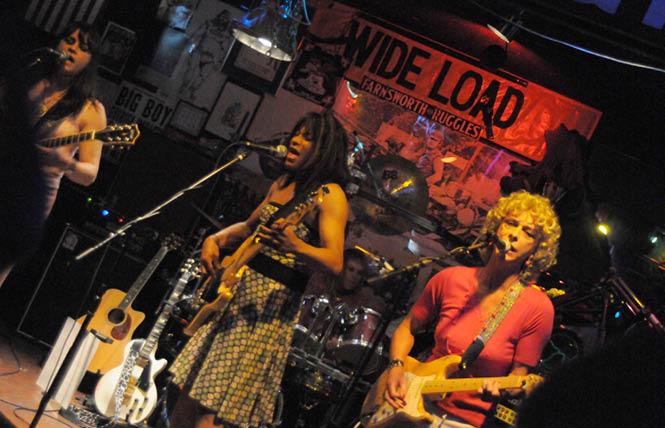 Singer-songwriter and guitarist Marilyn Mitchell, a member of the popular early 2000s San Francisco Bay Area all-trans female rock band Lipstick Conspiracy, shared new music and life stories on this week's Out in the Bay — Queer Radio & Podcast and hinted that her former group may get back together.

Her new 12-song album, "Lives Aligned," was inspired by politics and personal life. Mitchell wrote all the songs, showcasing an interesting variety of style and tempo. We hear four of them on this week's Out in the Bay, along with a Lipstick Conspiracy favorite.

The album, co-created with musician and audio engineer Craig Dukes, skewers former President Donald Trump in two songs: "Culprit" and "I'm So Glad (You're Gone)," which includes the lines:
Blatant lies, fallacies, fabrication
All a part of your planned occupation
In spite of this, they took it in, an illusion
With all your help, tried to rid the constitution

Mitchell, a kinesiology professor at San Francisco State University, told host Christopher Beale that she started transitioning around 1999, when she taught in Colorado with some "macho ... over-masculinized" colleagues who were "getting on everybody's nerves" — especially hers.

"I think my brain was looking for some kind of escape, and I started experimenting around with makeup and things like that," she said. Looking in the mirror, she said to herself, "Oh my gosh, there's somebody else in here that I don't even know!" So she took the San Francisco State job and started to get to know "this other part of me."

Guest host Christopher J. Beale is a queer independent radio host, producer and journalist based in San Francisco who also produces and hosts the "Stereotypes" podcast. Eric Jansen is founding host and managing producer of Out in the Bay - Queer Radio from San Francisco. Learn more and listen at https://www.outinthebay.org/

Out in the Bay: 108 questions aim to make holidays queerly comfortable