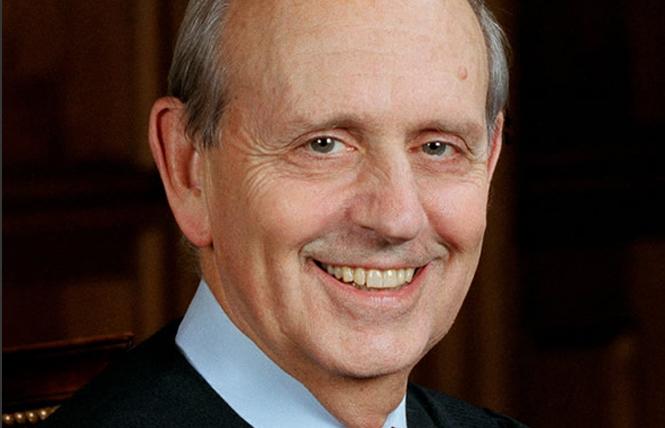 U.S. Supreme Court Associate Justice Stephen Breyer, who had joined landmark decisions from the court in support of LGBTQ rights, announced January 26 that he'd retire, opening up a new battle over the judiciary and the potential for President Joe Biden to add his first nominee to the high court.

First reported by NBC News, the retirement of Breyer, appointed by former President Bill Clinton and confirmed in 1994, fulfills a wish among progressives for him to step down to ensure a replacement would be named with Biden in the White House and Democrats in control of the U.S. Senate.

Biden has pledged to nominate a Black woman to the court, which would be a first. Speculation has centered on California Supreme Court Justice Leondra R. Kruger and Judge Ketanji Brown Jackson, a former Breyer Supreme Court clerk who in June was confirmed to join the U.S. Court of Appeals for the D.C. Circuit, according to the Washington Post.

President Biden told reporters Wednesday that he would have "more to say later" about Justice Breyer's retirement, as he was waiting for the justice's own statement.

"There has been no announcement from Justice Breyer — let him make whatever statement he wants to make, and I'm happy to talk about it later," said Biden according to a White House pool report.

California Senator Alex Padilla (D), who sits on the Senate Judiciary Committee, in a statement thanked Breyer for his service.

"In his nearly three decades of service on the Supreme Court, Justice Breyer has demonstrated his commitment to justice, fairness, and equality under law time and time again," Padilla stated. "From defending the constitutional right to abortion to being a champion for civil rights, he has made a substantial impact on the Supreme Court and our country.

"As a member of the Senate Judiciary Committee, I look forward to confirming an outstanding nominee who will faithfully uphold our constitutional values and reflect the diversity of our country," he added.

According to the Victory Institute's Presidential Appointments Initiative — a coalition of more than 30 LGBTQ and allied organizations — there are many qualified LGBTQ Black women who could serve on the Supreme Court, including Washington State Supreme Court Justice G. Helen Whitener.

"We urge President Biden to make history and appoint a Black LGBTQ woman to the U.S. Supreme Court," stated Ruben Gonzales, the institute's executive director. "With his previous commitment to nominate a Black woman, President Biden affirmed the important role diverse perspectives have on the bench and on the health of our democracy and society. There is a powerful pipeline of Black LGBTQ judges, officials and leaders who are more than qualified to fulfill this promise."

A number of LGBTQ organizations were quick to praise Breyer for his tenure on the court.

McGowan was referring to the decisions to strike down Colorado's Amendment 2, overturn state sodomy laws, strike down a key provision of the Defense of Marriage Act, legalize same-sex marriage nationwide, and that federal law barring discrimination on the basis of "sex" also prohibits discrimination based on sexual orientation and transgender status.

"And just last term, Justice Breyer has authored a number of decisions of tremendous significance to the LGBTQ community, including California v. Texas, rebuffing the latest attack on the constitutionality of the Affordable Care Act, and Mahanoy Area School District v. B.L., which affirmed the free speech rights of students while emphasizing the duty of schools to address harassment and bullying," McGowan stated.

She added that Lambda Legal fully supports Biden's commitment to name a Black woman to the court.

"We look forward to the president honoring his campaign commitment to nominate a Black woman to the Supreme Court, achieving a long overdue 'first' for that institution," McGowan stated.

"With Justice Stephen Breyer's retirement, the Supreme Court is losing a brilliant legal mind and a champion of liberty and equality," stated HRC interim President Joni Madison. "Justice Breyer's tenure on the court established him as a defender of LGBTQ+ civil rights and his decisions delivered important progress toward our country's founding ideal of a more perfect union that is inclusive and equitable for all. The Human Rights Campaign is deeply grateful for Justice Breyer's impact."

HRC stated that it intends to work with civil rights groups across the country to ensure that a "fair-minded constitutionalist" is nominated to the nation's highest court.

The agency's criteria includes that the nominee "demonstrate commitment to full equality under law for lesbian, gay, bisexual, transgender, and queer Americans; individuals living with HIV and AIDS; women; people with disabilities; and racial, ethnic and religious minorities." It also wants a nominee who demonstrates commitment to the constitutional right to privacy and individual liberty, including the right of two consenting adults to enter into consensual intimate relationships.

Biden nominates Jackson for US Supreme Court
Sign up!