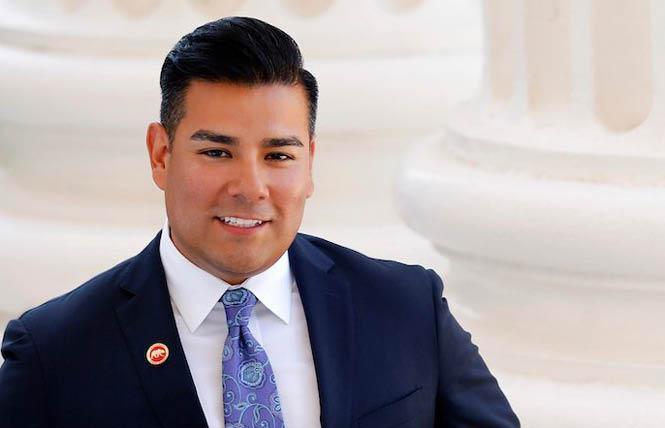 California Insurance Commissioner Ricardo Lara and four major LGBTQ civil rights advocacy groups in the state have joined together to urge the United States Food and Drug Administration to end decades of restrictions on gay and bisexual men donating blood.

Lara, who in 2018 became the first openly gay person elected to statewide office in California history, penned a letter January 24 to Xavier Becerra, the secretary of the Department of Health and Human Services (and Lara's former colleague as a statewide elected official, as Becerra was state attorney general before he was appointed to lead HHS by President Joe Biden), and Dr. Janet Woodcock, the acting commissioner of the federal Food and Drug Administration.

"This is outdated, discriminatory guidance based in prejudice — not in public health — and it is contributing to our current national blood donation crisis," Lara, a Democrat who is up for reelection this year, stated in his letter. "I respectfully urge you to permanently lift the entire deferral period in order for a male donor who has had sex with another man from donating blood."

As the Bay Area Reporter reported last week, in 1983 due to the AIDS epidemic, the FDA imposed a lifetime ban on blood donations by men who'd had sex with men since 1977. Under the Obama administration this was changed to a ban on men who'd had sex with a man in the past 12 months; and under the Trump administration amid a blood shortage caused by the COVID-19 pandemic, this period was reduced to three months.

Advocates have argued over the years that it would be better to ask questions about sexual behaviors — such as having multiple sexual partners — instead of about simply the sex of a male would-be donor's partners. The Canadian Blood Services last fall came out in support of such an approach and, in December, urged Health Canada end to the country's ban on sexually active gay men donating blood. A decision is expected in the spring.

Last summer, the National Health Service for the United Kingdom dropped its blood donor ban against gay and bisexual men in England, Scotland, and Wales. There, residents can donate blood, plasma, and platelets if they have been in a sexually active, monogamous relationship for at least three months. In Northern Ireland, however, there's been a delay in implementing the new rules due to a lack of medical staff caused by the COVID-19 pandemic.

Released near the end of National Blood Donor Month, Lara's letter comes on the heels of another letter sent to Becerra and Woodcock by U.S. Senator Tammy Baldwin (D-Wisconsin), a lesbian, and a group of nearly two-dozen senators January 13.

"In light of the nation's urgent blood supply crisis and to ensure that Americans have access to life-saving blood transfusions during the pandemic, we urge you to swiftly update your current blood donor deferral policies in favor of ones that are grounded in science, based on individualized risk factors, and allow all potentially eligible donors to do so free of stigma," the letter states. "We also request a briefing in the next 30 days on the agency's plan to update its [men who have sex with men] blood donation policies."

The letter was signed by 19 Democrats and the Senate's two independent members. Bisexual Senator Kyrsten Sinema (D-Arizona), the only other LGBTQ member of the upper congressional chamber, was not listed among the signatories.

"The FDA's de facto ban on blood donations from gay and bisexual men is outdated, stigmatizing, and not based in science," stated APLA Health CEO Craig E. Thompson. "Leading medical groups have long argued that the agency's policy should instead be based on a person's individual risk regardless of sexual orientation or gender identity. With the nation now experiencing the worst blood crisis in over a decade, it's time for the FDA to put an end to its obsolete and discriminatory policy to help ensure a safe and adequate blood supply during the pandemic."

Kevin Rogers, who is serving as the interim CEO of the San Francisco AIDS Foundation before Tyler TerMeer, Ph.D., takes over February 14, stated that the foundation supports questions based on sexual practices instead of sexual orientation.

"Requiring gay, bisexual, queer and other men who have sex with men to abstain from sex for three months in order to donate blood is an impractical and fear-based policy, rooted in stigma, that effectively prevents many possible donors from ever donating blood," Rogers stated. "With pre-exposure prophylaxis (PrEP), regular HIV testing, treatment as prevention, and other HIV prevention tools at our disposal, there are many effective ways for people to prevent HIV infection, or remain undetectable if living with HIV. We fully support screening donors on health history and risk behavior rather than identity and sexual orientation."

Indeed, research from the Williams Institute at the UCLA School of Law indicates that over 600,000 additional pints of blood could be contributed by gay and bisexual men annually if the ban was lifted. (For reference, an average person's body contains 10 total pints of blood.)

Russell Roybal, the chief advancement officer for the AIDS foundation, stated that queer men are being turned away in spite of potential benefits that could help all people.

"At the beginning of the COVID-19 pandemic, I was denied the ability to donate plasma because I am queer," Roybal stated. "As a person who had contracted COVID-19 very early on, I knew donating my plasma could have helped researchers just beginning to study vaccines and treatments yet was screened out of the process which required a 12-month deferral for men who have sex with men. Even with the shortened three-month deferral, it still sends the message that our blood is dangerous and worthless, which only serves to promote stigma and shame."

Joe Hollendoner, a gay man who used to be CEO at the AIDS foundation but is now executive director of the L.A. center, stated he's grateful for Lara's "leadership on this issue."

"The current ban, even with its recent revisions, is a remnant of the homophobia and ignorance that was propagated by politicians and bigots early in the AIDS pandemic," Hollendoner stated. "It specifically discriminates against gay men. A heterosexual person could have hundreds of partners within a three-month period and still be allowed to donate blood but if a gay man has sex just once during that same period, he would be automatically denied. The ban is bad public health policy while ignoring recent advancements in HIV care and discounting the science established by other countries that have no such ban. What's worse, it flies in the face of the critical need for blood donation in the midst of health emergencies like the one we now face."

"It's long past time for the FDA to adopt a policy based on science, not stigma," Martin stated. "We're grateful to Commissioner Lara for his continued leadership in the fight to end this outdated, discriminatory ban once and for all."

In addition to Lara's letter and the letter signed by Baldwin and her Senate colleagues, Vitalant, a blood donation center, is seeking HIV-negative gay and bi men for s study. As the B.A.R. reported, the ADVANCE Study, which stands for Assessing Donor Variability And New Concepts in Eligibility, is seeking about 200 men in the Bay Area (in addition to those in other cities) and Vitalant hopes to present its findings to the FDA next year.