Out in the World: A Wider Bridge celebrates 10-year anniversary 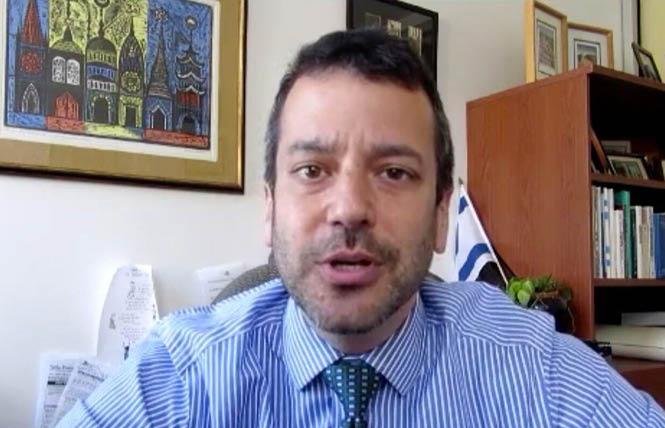 A Wider Bridge is celebrating its 10-year anniversary honoring the organization's beginnings and looking toward its future at an upcoming virtual gala.

"We're very excited to celebrate our past, present, and future and especially to be able to celebrate it with two of our honorees in San Francisco," said Alan Schwartz, CEO and board chair of the LGBTQ Jewish organization.

A Wider Bridge Executive Director Ethan Felson said the organization is "celebrating what we've been able to accomplish together the past 10 years and setting us up for an ambitious future," Monday, January 31, at 5 p.m. The live event is themed "Proud B'yachad — Proud Together."

"I'm so proud that this organization that I founded here in the Bay Area more than a decade ago is now thriving and creating real impact in LGBTQ communities all across the U.S. and in Israel," wrote Slepian in an email statement to the Bay Area Reporter.

Slepian expressed pride in AWB recognizing Gregory for his work during his six-year tenure.

"His leadership was so critical to the transformation of A Wider Bridge from a startup with great potential to an established organization that is now a respected voice across our communal landscape," Slepian wrote, noting the A Wider Fund he established to support LGBTQ Jewish organizations in Israel as one of Gregory's biggest accomplishments at the organization.

AWB is honoring Gregory with the 2022 Trailblazer Award for taking the organization to "unprecedented growth" and developing its "grantmaking program to help build equality in Israel," Felson said.

In an email to the B.A.R., Gregory said he was proud of being able to bring activists together and raise funds to support "innovative LGBTQ activism" in communities and parts of Israel "once thought to be impossible to break into, and that we built lasting bridges and understanding between communities."

"I am committed to making sure that the next 10 years of A Wider Bridge are as fruitful for the LGBTQ, Jewish, and pro-Israel communities as the first 10," he wrote.

Anita Friedman, director of the Jewish Family and Children's Services in the San Francisco Bay Area, one of the largest and oldest family service institutions, is an honorary chair of the event.

Felson and Schwartz said some of the top highlights of AWB's first decade include its founding, its leadership missions, and its A Wider Lens virtual learning program co-sponsored by the East Bay International Jewish Film Festival and the Israeli Consulate of the Pacific Northwest in San Francisco.

AWB allowed LGBTQ Jews to show up as their whole selves as queer, as Jewish, and as supporters of Israel and it connected LGBTQ leaders from the U.S. and Israel to build relationships and learn from each other, something Felson is proud of.

Schwartz said that is part of what AWB is celebrating.

"We were moving forward from that into a more positive light and more acceptance of us as individuals and as LGBT individuals," he said.

Felson wants to increase the $1.3 million organization's budget during the next decade, he said.

"We want to scale up in such a way that we are able to reach a critical mass of LGBTQ leaders over the next five years" to take on in-person and virtual missions to Israel, he explained.

"We recognize that when people meet LGBTQ Israelis, they'll recognize a community that's working to build a fair and decent society and to build those relationships," he said. 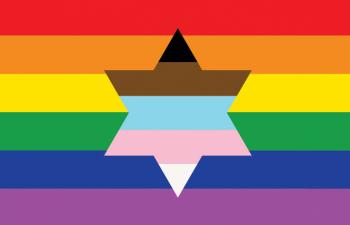 Felson was also excited about AWB's new "Refuse to Choose" campaign featuring the organization's new inclusive Pride flag. The flag is the traditional six colors of the rainbow flag with a Star of David in the center that has black and brown stripes and the pink, white, and blue colors of the transgender Pride flag.

"It's been very well received," Felson said, attributing the ability to spearhead the new campaign due to the work done during the last 10 years "building an institution, a network, and a framework that LGBTQ Jews are part of pride community, part of the LGBTQ community."

Felson added that the organization is "only able to do something like this because of what came over 10 years in terms of building an institution, a network and a framework that LGBTQ Jews are part of the pride community, part of the LGBTQ community, and we're able to stand with our feet proudly together for who we are."

Other honorees include Jeffrey Farber, CEO of the Koret Foundation, who is receiving the 2022 Tzedeck Award; Michelle Labgold, chief planning officer of the Greater Miami Jewish Federation, and Tracey Labgold, Florida education and training manager for Keshet, who are being honored with the 2022 Community Leadership Award; and community leader Bruce Maxwell, who will receive the 2022 Arthur Slepian Award.

Friedman was unable to respond to the B.A.R.'s request for comment by press time.

Tickets for the gala start at $180. To RSVP to the event, click here.

Out in the World: Arrests made in Mexican lesbian couple's killing
Sign up!