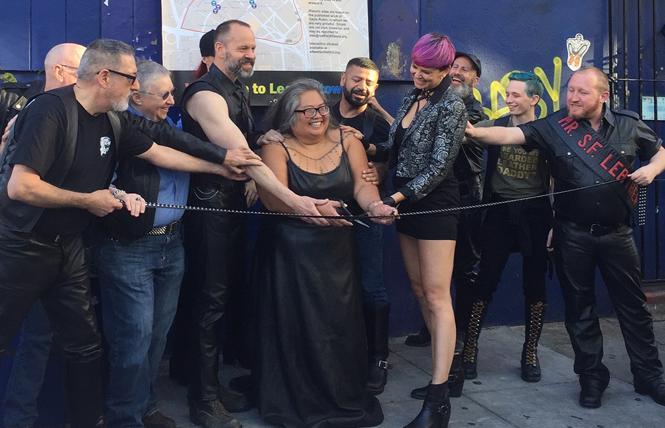 Rachele Sullivan, a leatherwoman who once served on the board of San Francisco-based Folsom Street Events, died January 17, according to the nonprofit that produces the Folsom Street Fair and other activities. She was 54.

A cause of death was not released. Ms. Sullivan passed away at home in the Bay Area surrounded by friends and family, Angel Adeyoha, a queer nonbinary person who is executive director of Folsom Street Events, told the Bay Area Reporter in an email. Ms. Sullivan had relocated to Washington state, but Adeyoha said that she returned to the Bay Area for end of life care.

Demetri Sparks, a gay man who is the former executive director of Folsom Street Events, told the B.A.R. that Ms. Sullivan's contributions were many and varied. She served on the Folsom Street board for about a decade, he said.

"She was instrumental in establishing Venus' Playground," Sparks said in a phone interview, referring to the woman's space at the Folsom Street Fair that is now known as the Playground.

"I met Rachele at the first board retreat in January 2006," Sparks said. "I had just started as executive director, and she came up to me and shared concerns of the women's community."

Sparks recalled that those issues included too many pictures being taken without consent. Ultimately, Ms. Sullivan's concerns were addressed by the establishment of Venus' Playground.

"The first year it was Betty Page's Secret," Sparks recalled, but he said the name had to be changed due to legal issues.

"Rachele was always there, she led about every department at one point or another — every aspect of the fair she touched — she was the glue," Sparks said.

Ms. Sullivan identified as a cis straight ally but was "very much part of the Folsom community," Sparks added. "She was an ally beyond measure."

"She had such great ideas to engage people and make them feel sexy," Sparks said.

Race Bannon, a gay man who has long been involved in the leather community and is a former leather columnist for the B.A.R., also knew Ms. Sullivan.

"Rachele Sullivan was a remarkable human being," Bannon wrote in an email. "She lit up every room she walked into. She dedicated her life to helping others. She embodied and inspired community contribution. Much of what's good about the Bay Area leather and LGBTQ communities had her hand in it in some way. She consistently walked her talk and was respected in every realm in which she worked. She was universally loved and will be truly missed."

"Rachele was a quiet but very active and extremely effective presence across a number of leather community institutions and initiatives," Rubin wrote in an email. "I didn't know her well, and wish I had known her better. But in the time our paths crossed, I realized what a treasure she was."

Ms. Sullivan was a big supporter of the Leather and LGBTQ Cultural District in San Francisco's South of Market neighborhood. Her Facebook page has several posts from years ago urging people to support the district when it was being considered by the Board of Supervisors.

Rubin wrote that her interactions with Ms. Sullivan were primarily around the formation of the leather district.

"My experience working with her was primarily around the process of getting the Leather and LGBTQ Cultural District formed, and she was a key player in that movement," Rubin stated. "Among other things, she was a liaison between those of us working on the leather/LGBTQ district, and the already established Soma Pilipinas Filipino Heritage District. But there were a lot of challenges in getting the district off the ground, and she was tireless in meeting them and moving forward."

On June 12, 2018, it was Ms. Sullivan who cut the ribbon outside what was then the Stud bar to mark the designation of the district. She also supported city landmarking for the Eagle bar, which was approved by the Board of Supervisors last year.

"Rachele was a rare treasure who was focused on quietly and efficiently (and brilliantly) doing the work rather than on getting recognition," Rubin wrote. "A lot of people who are public figures want the adulation; in contrast, Rachele seemed motivated to get things done that would benefit the communities to which she was so committed. Working with her on the district was a joy."

Ms. Sullivan was born December 18, 1967. She is survived by her son, Sebastian, and a huge family, both blood and chosen, Adeyoha wrote.

Ms. Sullivan worked professionally as a registered nurse and healer. According to the website Healers of Color Movement, her lineage includes traditional healers from the province of Aklan, Philippines.

Sparks said that her training as a nurse was beneficial at Folsom Street and she helped with medical aspects of the fair.