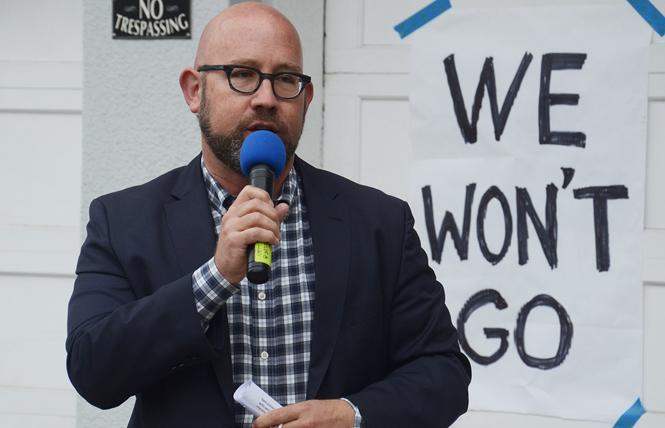 For much of the COVID-19 pandemic gay District 8 Supervisor Rafael Mandelman had avoided contracting the virus. Living with diabetes, he was at heightened risk if he had caught it.

Fully vaccinated and having also gotten a booster shot in November, Mandelman started off his board recess for Christmas seeing friends and family in the Bay Area. In one photo posted to his Instagram account, he is seated with his close kin unmasked while dining at Hayes Street Grill on Christmas Eve.

After receiving several notifications in the following days that he potentially was exposed to someone who had COVID, Mandelman tested positive himself a few days prior to New Year's Eve. Luckily, he had mild symptoms such as a sore throat, some congestion, and a little fatigue.

"It was like a relatively mild cold for me," Mandelman, 47, told the Bay Area Reporter during a recent phone interview.

Unlike most other politicians who have gotten COVID, Mandelman didn't release a press statement or post about his positive test result on social media. Until now, his having the virus has gone unreported.

"I alerted my housemate to the problem," said Mandelman, who largely kept to his bedroom for the next week other than for solo walks he took. "I tried to stay out of the common spaces and wear masks. Friends brought me food."

His not turning a COVID diagnosis into a social media moment is par for the course for Mandelman. Since winning his seat in a special election in June of 2018, Mandelman rarely posts about his personal life online and offline only holds the rare news conference to tout a legislative initiative.

It is a style of holding public office at odds with this digitally charged era of politics. Now, as he seeks a final four-year term this November, Mandelman is trying to up his online presence.

"I think some of my colleagues are honestly better at communicating on an almost minute-by-minute basis not just what they are doing in terms of our jobs but their lives," said Mandelman, who formerly served on the city's community college board and worked as an attorney for the city of Oakland. "It is honestly something I have to work on. It seems to be people want to be in more constant contact with their elected officials in that social media way. One of my goals for 2022 is to try to get more comfortable on social media."

Mandelman, the lone LGBTQ person currently among the 11 supervisors, had been on the board roughly a year and a half when the COVID pandemic broke out, upending the usual routine at City Hall. The building shut down to the public, the board moved to meeting virtually, and addressing the impacts of the health crisis took precedence.

Even with the complications wrought by the pandemic and the myriad demands of being a supervisor, Mandelman said it is "the best job" he's ever had and is hopeful his constituents in the city's Castro, Noe Valley, Diamond Heights, and Glen Park neighborhoods will elect him to a second term.

"It is endlessly interesting," he said. "I am able to help people with problems they may be having with the city and I am required to try to figure out problems and answers to the bigger city challenges."

His top priorities remain homelessness and the mental health needs of those living on the city's streets. He commissioned a report last year on how to build more affordable housing throughout his district, with recommendations he plans to pursue this year.

And Mandelman has been a vocal proponent for a new approach and increased funding for how the city addresses the needs of unhoused people. It is an issue that has long bedeviled Castro leaders and has only grown more pronounced during the pandemic.

"Their needs are a real challenge, not just for themselves but for the small businesses trying to operate and residents. The biggest challenge, in my view, facing the Castro are the unhoused folks with very serious mental health challenges living in the neighborhood in public spaces," said Mandelman. "It is related to the relatively high vacancy rate. I would place those two, sort of related, issues at the top of my unfinished business list. I think there is a lot going on in the Castro that is exciting and there remains a lot of potential."

So far no one with wide name recognition has pulled papers to run against him, meanwhile Mandelman has already raised more than $150,000 for his reelection effort. The filing deadline is June 14, so there remains a possibility someone considered more progressive than Mandelman, one of the more moderate supervisors, will seek to oppose him.

Voters often return D8 supes to office
Since the return of district elections in 2000, no elected District 8 supervisor has been defeated at the polls. The lone officeholder to not win was gay supervisor Jeff Sheehy, who had been appointed to fill a vacancy but lost to Mandelman.

When he first sought the seat in 2010 Mandelman was seen as too progressive for the historically moderate District 8. More than a decade later he is now seen as more centrist and often aligns on issues with Mayor London Breed.

Another moderate local elected, gay state Senator Scott Wiener (D-San Francisco), to whom Mandelman lost in the supervisor race 12 years ago, had endorsed Sheehy in the special election for the seat. Today, Wiener and Mandelman are often aligned on various issues.

This month, Wiener praised Mandelman for pushing for zoning updates to allow more bars to open in the LGBTQ Castro district and for gay bathhouses to operate in more areas of the city. In a tweet he called the changes "way overdue" and gave "big kudos" to Mandelman "for leading."

Thinking he could be a bridge builder between the board's moderate and progressive camps, as well as between the board and the mayor's office, Mandelman admitted to the B.A.R. he has not been successful in that arena. Despite the various policy fights at City Hall, there is often more agreement than disagreement between the city's elected leaders, he argued.

"When I was elected, I was pretty much center of the board — maybe center left," he said. "I don't think I have shifted in my politics but I do think the board has shifted a lot. I don't believe the relationship between the mayor and the supervisors has been as productive as I wish it could have been. There's probably blame to go around for that."

Much of the reported differences among the board and mayor are based on "artificial" categorization of where they stand in the city's political landscape, Mandelman contended.

"There are no Mitch McConnells in San Francisco politics. We don't even have Kyrsten Sinema and Joe Manchin," said Mandelman, referring to the Republican minority leader in the U.S. Senate and the two most moderate Democratic senators. "We should be able to work together in a respectful and productive way."

Rather than being mocked for its liberal values, Mandelman hopes City Hall can come together this year in tackling the myriad issues confronting San Francisco as proof that "progressive governance can be effective." And he hopes to be involved in doing so not only in 2022 but also during a second term.

"I have been able to work and contribute to trying to solve some of these hard, big problems," said Mandelman. "But I don't think my work is done and would like to make more progress in the next four years."

Thus, he has dubbed his campaign WIMP: Write-In Michael Petrelis. Since his name doesn't appear on the official ballot mailed out to voters this month, however, it is highly unlikely he will come anywhere near the votes cast for Assessor-Recorder Joaquín Torres.

He is seeking to serve out the remainder of former assessor-recorder Carmen Chu's term through early January 2023. After Mayor London Breed named Chu as the new city administrator, she appointed Torres as her successor.

Since his name is the only one on the ballot, Torres is expected to easily retain the position and will need to run for a full four-year term in November. It is Torres' not being officially opposed that led Petrelis to seek to be a write-in candidate.

"I cannot remain on the sidelines for this race and because the filing fee was over $4,000, beyond my no-budget method of campaigning, I want to give voters the chance to cast a write-in ballot for an opponent to Torres," he told the B.A.R.

Political Notebook: Op-art trots out a trying 2021
Sign up!