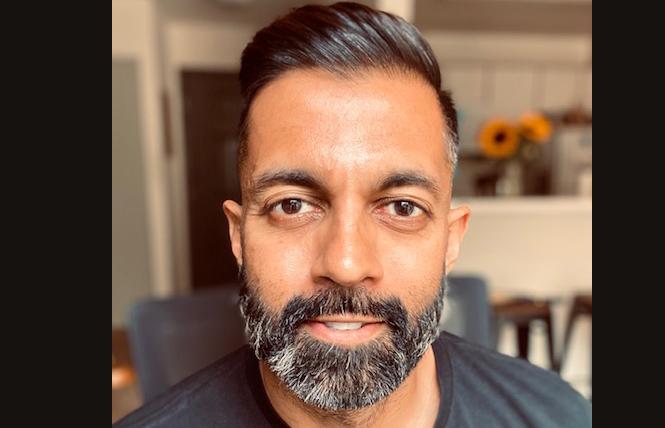 Openhouse, which provides housing and services to LGBTQ seniors, has hired a new director of mission engagement who will oversee the nonprofit's fundraising.

Jacob Ittycheria, a gay man, will start in the position of director of mission engagement February 1. Most recently, he was the associate director of major gifts at the San Francisco AIDS Foundation, where he held a significant portfolio and produced community and mini-documentaries that helped bring to life the stories of San Franciscans who are HIV-positive and who found health and solace in the programming at the foundation, a news release stated.

Ittycheria, 44, stated he hoped to bring his experience to the aid of LGBTQ seniors.

"My reason for coming to Openhouse was because I wanted to lift up and center the stories and life experiences of our community's LGBTQ+ adults," he stated. "Many LGBTQ + older adults fought for equal rights and representation of our gay, queer, and transgender, gender-nonconforming/nonbinary members and my desire is to share their stories with the world."

Ittycheria was also a successful fundraiser for the AIDS/LifeCycle, the 545-mile bike ride from San Francisco to Los Angeles, the release stated. He worked in L.A. out of the Los Angeles LGBT Center, which co-produces the event. (During the COVID-19 pandemic, the ride has been canceled the last two years. This year it is expected to take place in person June 5-11.)

"We are thrilled to have Jacob join the Openhouse family," stated Kathleen Sullivan, Ph.D., a lesbian who is executive director of the agency. "He has proven success at connecting donors and the mission of the organization, which is always a powerful way to invite individuals to invest in the good work the staff is doing."

Openhouse has a strong base of longtime donors and corporate and foundation support, the release stated. As the Bay Area Reporter previously reported, the agency has joined with On Lok, another senior service provider, to launch the Openhouse + On Lok Community Day Services. It is the nation's first community-based adult day program co-designed for and with the LGBTQ+ community. The program soft launched last fall.

2 forums to feature AD 17 candidates
Ahead of the February 15 special primary election for the 17th District state Assembly seat, two groups will hold forums featuring the candidates who hope to represent the Eastside of San Francisco.

The Castro/Eureka Valley Neighborhood Association will hold its online forum Thursday, January 27, from 6 to 7:30 p.m. According to an email announcement, three of the four candidates have confirmed their participation: gay former supervisor David Campos, and straight allies Bilal Mahmood and Thea Selby, an elected member of the City College of San Francisco board of trustees. (At press time, the fourth candidate, straight ally District 6 Supervisor Matt Haney, was not listed as confirming.)

Joe Eskenazi of Mission Local will moderate the forum, which will focus on a variety of policy positions and priorities.

To join the free forum, go to the Zoom link or the Facebook page.

The second event is sponsored by the Golden Gate Business Association and three other co-sponsors. This forum is scheduled for Thursday, February 3, from 6 to 7:15 p.m. and will also be virtual.

According to a news release from GGBA, an LGBTQ chamber of commerce, all four candidates are expected to participate. The forum will focus on small businesses.

Manny Yekutiel, a gay man who owns the eponymous cafe and event space in the Mission, will moderate. (Yekutiel is also an appointed member of the San Francisco Municipal Transportation Agency's board of directors.)

In addition to GGBA, co-sponsors are the Hispanic Chambers of Commerce of San Francisco, the San Francisco Filipino American Chamber of Commerce, and the San Francisco Council of District Merchants Association.
The free event will take place on Zoom. Pre-registration is required. Registrants will receive a link one hour in advance of the forum.

The program encourages middle school students (grades 6-8) to exercise their writing skills by creating an original 2,000-word fictional story inspired by the life and works of London, a news release stated. Last year, the program had 47 entries, coming from as far away as Maine and New Jersey.

This year's theme is "Building Brighter Communities." According to the release, the theme reflects London's own hopes for the land he purchased in Sonoma County, which eventually became the state park. Today, visitors can experience both history and nature in the park's 1,400 acres.

All students who enter the contest will receive one free day pass for admission to the park, which includes one carload of guests (up to nine passengers).

The contest prizes are $200 for first place, $150 for second place, and $100 for third place. The contest is judged blindly by a panel of volunteers who are not employees of Jack London Park Partners, which operates and funds the park.

Complete contest rules and entry forms are available here. The deadline is March 31.

After an initial screening, volunteers are interviewed by the judges of the civil grand jury committee who select a pool of 30 jurors. From that pool the 19 sworn jurors and 11 alternates are randomly selected, the release stated.

The upcoming term runs from July 1 to June 30, 2023. The civil grand jury usually meets once a week, with additional meetings and interviews scheduled as necessary.

The deadline to apply is Friday, May 13.