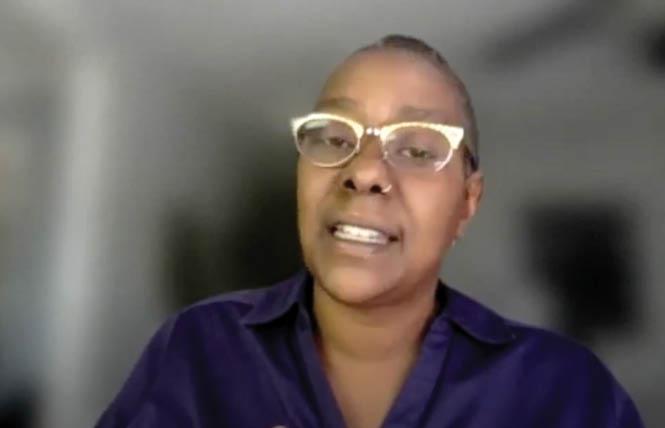 Kendra R. Johnson, executive director of Equality North Carolina, is part of a new coalition of LGBTQ groups pushing for a nonpartisan non-discrimination law at the federal level. Photo: Screengrab

But the organizations aren't pushing for the Democrats' Equality Act, which was passed by the House of Representatives last year but is effectively dead in the U.S. Senate. Nor are they advocating for the Fairness for All Act, which was introduced by Congressmember Chris Stewart (R-Utah) but was roundly criticized by most major LGBTQ rights groups for not going far enough.

Rather the coalition is pushing for new legislation that can be passed in a bipartisan manner, striking a balance between LGBTQ civil rights protections and existing precedent regarding religious freedom. The Equality and Fairness for all Americans Coalition is seeking immediate action, since the House is expected to flip from Democratic to Republican control in November's elections, which would make the passage of any LGBTQ rights legislation that much more difficult.

"We have — right now — a once in a lifetime opportunity to pass bipartisan LGBTQ federal protections and the way forward to do this, we believe, [is] state leaders and state organizations can show us a path forward to that kind of legislation," Michael Soto, the executive director of Equality Arizona, said in a January 12 virtual news conference announcing the coalition's aims.

Soto passed the mic to Angela Hughey, a lesbian who is the president of ONE Community in Phoenix, who gave examples of LGBTQ protections expanding in a bipartisan way in states such as Utah, where Equality Utah and the powerful Church of Jesus Christ of Latter-day Saints came to a 2015 agreement on a non-discrimination law, and Arizona, where in 2019 Republican Governor Douglas Anthony Ducey Jr. signed a repeal of a law that effectively banned the discussion of homosexuality in schools.

"It's time to pivot," Hughey said. "We know that the clock is ticking and this really may be the last opportunity for bipartisan LGBTQ inclusive federal legislation for the next decade or more. We know we have not just an opportunity but a responsibility to create legislation that can break the partisan gridlock that can pass the House and the Senate before the 2022 elections."

Soto led those watching the virtual event through the coalition's framework. The legislation championed by the coalition would provide LGBTQ non-discrimination protections on the federal level in "employment, housing, credit, jury service, education, and public accommodations," Soto said.

It would also allow religious entities that receive federal funding for social services to continue doing so, as per the U.S. Supreme Court's 2021 decision in Fulton v. City of Philadelphia.

As the Bay Area Reporter previously reported, in that case the high court unanimously decided that the city of Philadelphia violated the free exercise clause of the First Amendment to the U.S. Constitution when it refused to contract with the Roman Catholic Archdiocese of Philadelphia's foster care agency due to a city ordinance prohibiting foster care agencies from discriminating based on sexual orientation.

"This is really critical in a time of pandemic. These religious services are filling a part of the social safety net that government does not fill and are critical for millions of Americans in this time of, hopefully recovery," Soto said. "It's important for you to know that the majority of states and municipalities with LGBTQ inclusive non-discrimination laws already have these exemptions."

The legislation would also bring the employment requirement for the law to be applicable from 15 employees to one. It would also institute a federal ban on so-called conversion therapy for adults and minors. Conversion therapy is already banned for minors in 20 states, including California, and the District of Columbia.

When asked if there is a particular member of Congress who is planning to introduce the legislation, Hughey told the B.A.R. in a statement that "we are currently in discussions with several members."

Soto said Americans have to find a way to tolerate and provide space for one another.

"We believe it's based in American ideals of fairness and bringing people together from different walks of life to live in a civil society with one another," Soto said.

Hughey said that "inaction is action" and that "no compromise really is a compromise."

"This framework will have a tangible and positive impact on LGBTQ Americans," Hughey said. "We also believe that it's important for center-left legislators to understand this framework is critical for pressing civil rights legislation. Federal policy needs to work for all LGBTQ people, not just in blue states or on the coasts."

Better approach needed
Several representatives of the coalition then got on the virtual news conference to discuss why they feel this approach is preferable to the Equality Act and why it'd work now.

"Our organization decided to join this coalition because, as you know, we've been doing the work of equality in the state of North Carolina," said Kendra R. Johnson, a queer lesbian who is the executive director of Equality North Carolina. "We passed 16 ordinances last year with the help of coalition partners, and for the 3 million folks who have protections in the state, that is incredible, but for the other 7 million people in North Carolina who do not, we need to end this patchwork of legislation and we need to bring comprehensive non-discrimination protections for the entire population. I believe that also only a bipartisan solution will bring the changes we want to see and ensure it'll be a lasting fix."

"We have also passed approximately the same number of ordinances," Schneider said. "We have 15 of these local fairness laws in our state, and that comprises about 12% of our population. The minute an LGBTQ person steps outside of one of those ZIP codes they are vulnerable to this kind of discrimination and in a state like West Virginia, we very much appreciate how important it is to work in a bipartisan approach and to work with the faith community. We have accomplished some of our goals because we've worked with these broad coalitions and we've worked with both Democrats and Republicans in making these equality laws we've passed successful."

When asked about the coalition, Samuel Garrett-Pate of Equality California, which is not a member, told the B.A.R. that "I don't have anything negative to say about their proposals — I haven't personally read them — but our focus at this moment is passing voting rights legislation, the Women's Health Protection Act, and we continue to believe that the Senate needs to pass the Equality Act the way the House has. This was a promise by President [Joe] Biden. ... It's up to the Senate to get it done."

Garrett-Pate said that California is a shining star of non-discrimination protections.

The Human Rights Campaign, which champions the Equality Act, issued a statement to the B.A.R. through a spokesperson in which it rejected the coalition's approach without being critical.

"We are encouraged by this broad support and know that passing the Equality Act is the best path forward to guarantee comprehensive protections not only for LGBTQ+ people, but for millions of women, people of color, and people of all faiths, and welcome hearing from all groups who support its passage," the spokesperson added. "The Equality Act retains the robust religious exemptions that already exist under the First Amendment and current civil rights laws. Religious organizations are an important part of the administration of our social safety net and the Equality Act would strengthen access to essential social services."