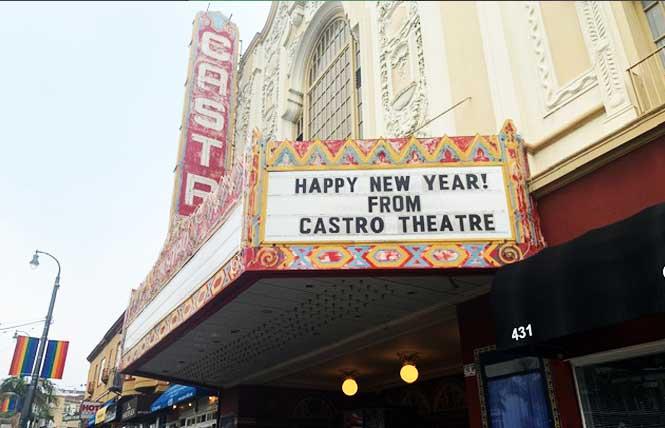 The Castro Theatre's programming will be overseen by Another Planet Entertainment once the production company completes a renovation. Photo: Sari Staver

Major changes are coming to the Castro Theatre, with the announcement that the co-producer of the Outside Lands music festival will be in charge of programming, which will be expanded to include live music, comedy, and community events in addition to films.

The San Francisco Chronicle broke the news January 19 that Berkeley-based Another Planet Entertainment will be renovating the theater with a new screen, sound system, lighting, ventilation, video equipment, and a larger lobby and backstage area.

Currently-scheduled programming will continue until the renovation process begins later this year — Another Planet Entertainment is planning its programming for 2023. During this time the marquee and iconic Castro neon sign will be renovated.

Another Planet Entertainment, overseen by CEO and co-founder Gregg Perloff, is perhaps best known for co-producing the Outside Lands music festival in Golden Gate Park. It also promotes concerts at the Bill Graham Civic Auditorium in the Tenderloin, the Fox Theater in downtown Oakland, and the Greek Theatre in Berkeley.

Perloff told the Bay Area Reporter that his group has been working with the Castro Theatre for 14 months.

Perloff said that he "fell in love with the area" because the first night he spent when he came to San Francisco was at Beck's Motor Lodge on Market Street.

Perloff said that the renovations will last about eight months and will begin after they get approval from the city to commence.

"In San Francisco, everything is about process," Perloff said.

Perloff said that he wants to maintain the theater's role as a community space.

"We all live in the Bay Area, but this is a community theater on many levels," Perloff said. "We're going to add to what's been going on and add to film more comedy, more music, community events, in addition to film. ... That would be crazy, to not support the LGBTQ community in the Castro. Why would anyone want to do that?"

The Castro Theatre, which initially opened in 1922, will still be owned by Bay Properties Inc. and the Nassar family, who did not respond to an immediate request for comment. However the theater did make a Facebook post January 19 attributed to Elaine Nassar Padian stating, "We are thrilled to announce a new development — after operating the Castro Theatre for nearly a hundred years, we are partnering with our friends at Another Planet Entertainment (APE) to bring you world class entertainment and the next evolution of our historic theatre. The Castro Theatre will be undergoing major improvements while also preserving our rich history."

It appears that the Frameline film festival will continue to take place at the Castro.

James Woolley, the executive director of Frameline, which produces the LGBTQ film festival in San Francisco at the theater, told the B.A.R. that the organization is looking forward to working with Another Planet Entertainment.

"Today's news regarding the change of management at the Castro Theatre marks the beginning of a new chapter in the life of the beloved Castro Theatre on the eve of its historic 100-year anniversary," Woolley stated to the B.A.R. "We are pleased to confirm that the Frameline46 San Francisco International LGBTQ+ Film Festival will proceed at the Castro Theatre, June 16-26, 2022. We look forward to continuing Frameline's legacy of presenting the best in new LGBTQ+ film at the Castro Theatre, and working in partnership with Another Planet Entertainment for years to come."

Chris Verdugo, the executive director of the San Francisco Gay Men's Chorus, stated to the B.A.R. that he hopes the group will be able to stay at the theater.

"San Francisco Gay Men's Chorus has a 32-year tradition of delighting families — both biological and chosen — on Christmas Eve with our annual holiday show at the Castro Theatre," Verdugo stated. "The combination of the historic venue and the San Francisco Gay Men's Chorus remains one of the lasting traditions that keep our city entertained and connected. We look forward to working with Another Planet Entertainment to ensure we can continue this long-standing and beloved city tradition."

David Hegarty, the organist at the theater, told the B.A.R. that the organ isn't going anywhere.

"Another Planet Entertainment assures me that the plans for the new organ will be going forward, and that organ music will continue to be a prominent feature of the Castro Theatre," Hegarty stated. "Film festivals will be scheduled as usual. The theatre is going to be beautifully upgraded without interfering with its classic architecture. So this may turn out to be a positive move."


Terry Asten Bennett, a straight ally who is the general manager of Cliff's Variety, also comes from a long line of Castro Street business owners.

"It is exciting to see life come back to the theater," Bennett told the Bay Area Reporter. "It is such an important draw for our neighborhood."

The theater has been shuttered since the beginning of the COVID-19 lockdowns in 2020, with some exceptions, such as the U.S. premiere of "The Matrix: Resurrections" last month, as the B.A.R. previously reported.

Masood Samereie, a straight ally who is president of the Castro Merchants Association, said that the group has been in touch with Another Planet Entertainment and the building owners.

"We have been contacted by the theater ownership and Another Planet Entertainment about the new agreement and are going to be working closely with them to support the theater as we always have," Samereie told the B.A.R.

Not everyone is so sanguine, however.

"I'm somewhere in between people who are really pissed and people who are like 'Oh great, it's going to be spiffier, cleaner, and more state of the art,'" Huestis said.

Huestis is concerned that the cost to rent the space might turn out to be so high that many LGBTQ people will be priced out of it. Huestis did events featuring San Francisco drag artists as well as film screenings attended by stars from Hollywood's Golden Age such as Debbie Reynolds and Tony Curtis.

"The way I and others were able to do events there — it was not cheap, but it was affordable," Huestis said. "Castro is a place like no other. But the world is changing — COVID certainly has facilitated changes like we've never seen. The theater as a repertoire house was no longer sustainable."

Gay publicist Lawrence Helman told the B.A.R. that he has a lot of memories of the theater, which he referred to as "our church."

"I'm hopeful that the new incarnation of the historic landmark will continue to inspire future generations of theatergoers," Helman added.

Joshua Grannell, also known as Peaches Christ, was in shock over the news.

"For me, the Castro Theatre is quite literally a church, a cathedral where so many of us come together to find fellowship in a safe space to worship the unique cinema and live entertainment we love," Grannell wrote in an email. "It's particularly special because we do it at this historically queer landmark — a movie palace and there's nothing else like it in the world. I'm trying to see the silver lining, but am admittedly afraid that a giant corporation like Another Planet won't see the value in things like film festivals, drag parody shows, and 'FREE lap-dances with every large popcorn.' I'm hoping I'm wrong and that they'd like to work together with the community producers who have called this space home. I look forward to hopefully meeting with them at some point to discuss a future together."

Arts publicist Liam Passmore said the news "feels like an utter shock to the system."

"The theater is in the core DNA of the neighborhood," he wrote in a message. "A cultural lodestar in terms of film and other experiences. God knows, it's been a long time since I kept a paper program calendar on my refrigerator, but first thought was, what will happen to the new organ slated to replace the mighty Wurlitzer? Yet, in the end, clearly a diet of repertory theater is not enough to keep things as they were pre-pandemic. Feels to me it is going to be all about the programming that comes in to keep it a vital destination. Hopefully a new chapter in the theater's storied history, but damn, it leaves a pang."

Updated, 1/19/22: This article has been updated with comments from officials at the Frameline film festival and comments from Gregg Perloff and others.