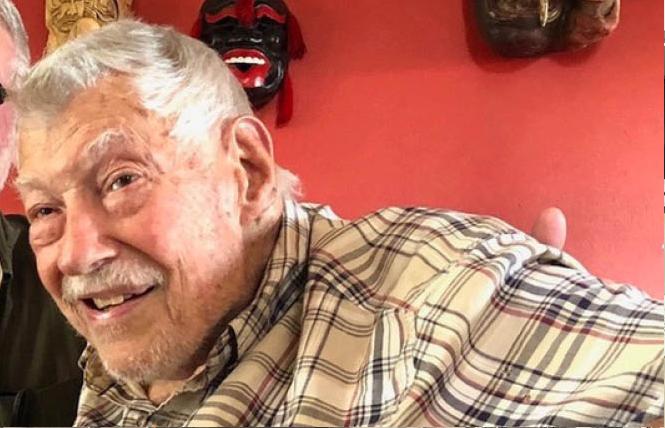 Longtime gay rights activist and retired San Francisco State University professor Stuart Loomis died January 17 in Oaxaca, Mexico, where he had lived for many years. He was 102.

Mr. Loomis was a prominent gay activist in San Francisco, noted his friend Tim Allen. He was a member of the early gay rights group Society for Individual Rights. He also co-founded the Haight Ashbury Free Clinic, which is now part of HealthRIGHT 360. Allen wrote in an email that Mr. Loomis was one of the people that then-mayor Dianne Feinstein considered for appointment to the Board of Supervisors in 1978 following the assassination of Harvey Milk, the first gay person elected to public office in San Francisco and California. Ultimately, Feinstein named Harry Britt to the seat. (Britt died in 2020.) Allen wrote that it was because she didn't want anyone who had been arrested.

"Like most gay men who were out before the 1970s, Stuart had been arrested for being gay," Allen wrote.

Feinstein's office did not return a message seeking comment.

Gay San Francisco filmmaker Peter Stein wrote in a Facebook message that Mr. Loomis appeared in his documentary, "The Hidden Cities of San Francisco — The Castro."

"While I never had the chance to know him well personally, he provided a memorable interview for my documentary 'The Castro,' and also gave important on-camera testimonials in Arthur Dong's 'Coming Out Under Fire' and Arthur Bresson Jr.'s 'Gay USA,'" Stein wrote.

Mr. Loomis was a soft-spoken pioneer in the San Francisco gay community of the 1960s-1970s, Stein added.

"He had served in World War II, trained as a social psychologist, and, after moving to the Bay Area, quietly but with determination became an advocate for the mental health needs of the emerging young community he found here," Stein wrote. "He advocated for counseling programs, founding the psychological services of Haight Ashbury Free Clinic and serving on the faculty of SF State."

Roe Bressan, the late Arthur Bressan's sister, wrote in an email that she knew Mr. Loomis when he lived in San Francisco.

"Stuart was Artie's greatest benefactor and supporter," Roe Bressan wrote. "I called him just a few weeks ago to report on Artie's continued re-introduction in the film world, and he could not have been more thrilled."

Among other things, she was referring to "Buddies" (1985), a film Arthur Bressan Jr. produced and directed. Allen wrote that it was "the first feature film about AIDS, with a subtext of promoting activism that was well before its time. There was no institutional support for such a film at that time, so Stuart personally provided the funding for the film." Allen stated that Mr. Loomis was generous with his donations even though he lived on a modest teaching salary.

A fully restored print of "Buddies" premiered at the Castro Theatre in June 2018, in collaboration with the GLBT Historical Society and The Bressan Project. The historical society also houses Mr. Loomis' papers.

According to Allen, Mr. Loomis did his graduate studies at the University of Chicago but did not receive his Ph.D.

Allen stated that Mr. Loomis, who was born in November 1919, lived in San Francisco from the early 1950s until about 1999, when he moved to Oaxaca at the age of 80. There, he served on the board of the Oaxaca Lending Library.

Cipriano Ramos, Mr. Loomis' longtime friend and caretaker, wrote on Facebook that Mr. Loomis was the Oaxaca library's longest-living member and was quite active in the library community.

Stein noted that Mr. Loomis' philosophy about being out resonates today.

"His insights about the importance of LGBTQ folks being able to live fully and authentically in public, and not be forced to split off and compartmentalize their lives, remain wise to this day," Stein wrote.