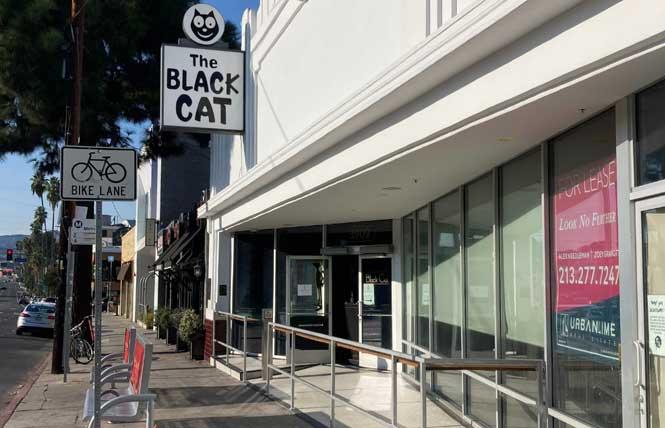 The Black Cat Tavern in Los Angeles is being considered for a state landmark designation. Photo: Courtesy Kyle Jarret

The California State Historical Resources Commission will hold a virtual meeting Friday, January 21, at 9 a.m. to consider several nominations for federal historical designation and one for state designation.

Three of the eight properties on the agenda are associated with LGBTQ rights: the Morris Kight House and the Black Cat Tavern in Los Angeles, and Glide Memorial Church in San Francisco.

Glide and the Kight house are being considered for nomination to the National Register of Historic Places, according to a news release from California State Parks, which oversees historic preservation.

Regarding Glide, the release noted that the 1931 church and adjacent apartment building are located in San Francisco's Tenderloin neighborhood. It was designed by James W. Plachek and built in the Mediterranean Revival style. The property is part of the existing Tenderloin Historic District. It is being nominated for its association with social history as a women's residence in the 1930s-1950s, early LGBTQ history in the 1960s, Black and Asian ethnic heritage in the 1960s, and as a significant example of Plachek's work, according to the release.

The Kight house is a Craftsman bungalow constructed in 1911. The release stated that it's significant for its association with Kight, a Los Angeles gay activist who died in 2003, who moved into the house in 1967. Kight's home became a meeting place and organizing center associated with multiple gay rights organizations and events, including the L.A. chapter of the Gay Liberation Front, the Christopher Street West parade, and the Gay Community Services Center (later the Los Angeles LGBT Center), the release stated.

The Black Cat is being considered for a California Historical Landmark nomination. The release stated that the tavern on Sunset Boulevard was the site of the first LGBTQ civil rights demonstration in Southern California. Following the arrests of 14 men on New Year's Eve 1966 at the bar for kissing, several hundred people protested at the Black Cat on February 11, 1967. The legal battle from the arrests laid the groundwork for California LGBTQ rights organizations to overturn the state's sodomy laws, according to the release.

Placement on the national register can help bring positive attention to a historic place, according to the state parks release. Registration also provides incentives for preservation of historic properties, including special building codes to facilitate the restoration of historic structures.

The public can view the meeting via Cal-SPAN or participate in the meeting by registering for attendance via the Zoom link posted on the commission's Meeting Schedule and Notices webpage.

Grayson was a gay man and a longtime member of the Harvey Milk LGBTQ Democratic Club. He died in 2011 at the age of 66. In addition to his Milk club activities, Grayson worked professionally as a home care provider, was a member of the Senior Action Network, and was a delegate to the San Francisco Labor Council.

The free event will focus on HIV/AIDS and mental health issues, according to a news release from Sue Englander, conference convener. Speakers include gay activist Cleve Jones, who's living with HIV; Cecilia Chung, a transgender and HIV-positive woman who's a member of the San Francisco Health Commission; and health counselors Derrick Mapp and Lillian Talero from the Shanti Project. Gregg Cassin from Shanti will serve as MC.

Originally, the Milk club sponsored the annual elder conference named in Grayson's honor. But the conference is now its own nonprofit, sponsored by San Francisco Pride, and will be presenting this year's convening with co-sponsor the San Francisco AIDS Foundation, Englander stated. LGBTQ senior agency Openhouse, the Milk club, and Quest Clinical Research are also among the sponsors, the release stated.

The event will feature trans entrepreneur Jené Sais Quoi, who started a natural beauty brand Berkshire Botanicals with her mom, Darlene Batroy. Her work has attracted the attention of Kim Kardashian, "Access Hollywood," and the Wall Street Journal, according to a news release. Prior to her transition Quoi won the VH1 reality show "Glam God with Vivica A. Fox," the release stated.

Another presenter will be Ric Victores, president and founder of ImagineX Productions and host of the Homegrown Business Summit.

SF redistricting meetings coming up
The San Francisco Redistricting Task Force has begun its public input process and will soon have specific district-focused meetings. The task force draws the boundary lines for the city's 11 supervisorial districts.

For more information, check out the schedule of meetings compiled by San Francisco Rising.