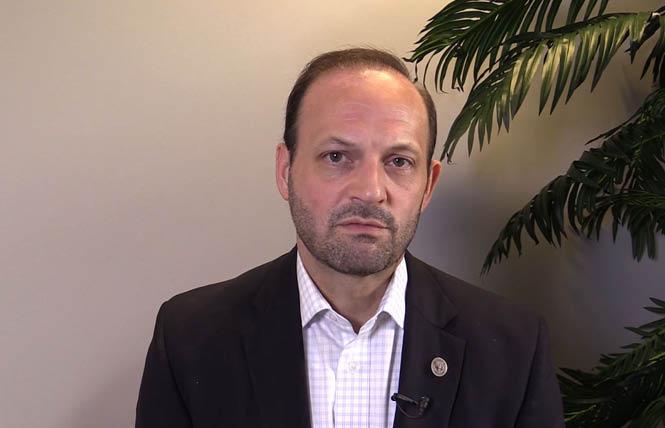 A South Carolina man found guilty of consensual sex with another man — before the United States Supreme Court struck down criminal laws against homosexuality — is suing state Attorney General Alan Wilson over the continued requirement he register as a sex offender.

Doe v. Wilson was filed in the U.S. District Court for the District of South Carolina on December 22. In it the plaintiff, known only as John Doe, alleges that even though the Supreme Court found his conviction — and those like his — to violate his right to privacy back in the 2003 case of Lawrence v. Texas, he is still being made to register as a sex offender.

Before criminal statutes ended in 2003, same-sex sexual relations were forbidden in 14 states, including South Carolina, where it was referred to as "sodomy" or "buggery." California repealed its sodomy laws back in 1975.

"Plaintiff John Doe was convicted in 2001 for buggery for having consensual sex with another man," the complaint states. "The other man was also convicted of buggery. Doe received a pardon in 2006. Still, he is subject to sex offense registration restrictions pursuant to a facially unconstitutional statute. He suffers severely under the sex offender label, which involves the state in the daily management of his life."

Doe is seeking to have requiring sex offender registration for a conviction under the statute also declared as unconstitutional.

"Doe seeks injunctive relief against state officials from continuing to enforce the ... statutes, compelling defendants to remove Doe from [sex offender registry] and expunge all records signaling his past inclusion on the registry, and enjoining defendants from administering and enforcing the Buggery statute generally and through [sex offender registry] specifically," the complaint states.

"This practice needlessly subjects law-abiding citizens to the horrors of the sex offender registry and demonstrates a deeply troubling animosity by the state towards the gay community," Allen Chaney, the legal director of the ACLU-SC, stated in a news release.

The Palmetto State is one of the last states that requires people convicted of consensual gay sex prior to 2003 to register as sex offenders. The others are Mississippi and Idaho, according to Strugar.

"The information that offenders are required to report upon registration is encyclopedic in scope," the complaint states. "A registrant must provide their name; their Social Security number; their age; their race; their sex; their photograph; their date of birth; their addresses of permanent and temporary residence; their place of employment; their date of employment; the name, address, and county of any institution of higher learning where the registrant is enrolled, employed, volunteers, interns, or otherwise carries on a vocation; their vehicle's make, model, color, and license tag number; their fingerprints; their palm prints; and any and every online account they use."

Furthermore, people on the registry must inform the sheriff within three business days of any change in residence, property ownership, employment, or educational enrollment, according to the complaint.

School districts must provide the names and addresses of sex offenders who reside within 1,000 feet of a school bus stop.

"It is unconscionable that in 2021, South Carolina would still put people convicted of having gay sex on the sex offender registry," Strugar stated. "This kind of overt, state-sanctioned homophobia would have been surprising 30 years ago. Today it is shocking. And it is unconstitutional."

The South Carolina Attorney General's office told the B.A.R. January 7 that "as a matter of policy, we cannot comment on pending litigation."

LGBTQ Agenda is an online column that appears weekly. It's off next week due to the MLK holiday and returns January 25. Got a tip on queer news? Contact John Ferrannini at j.ferrannini@ebar.com

Correction, 1/11/22: Doe's attorney, Matthew Strugar, reached out to the Bay Area Reporter to correct Chaney's assertion that South Carolina was the only state in the United States to make people convicted of consensual gay sex register as sex offenders. In fact, it is one of three, Strugar stated.