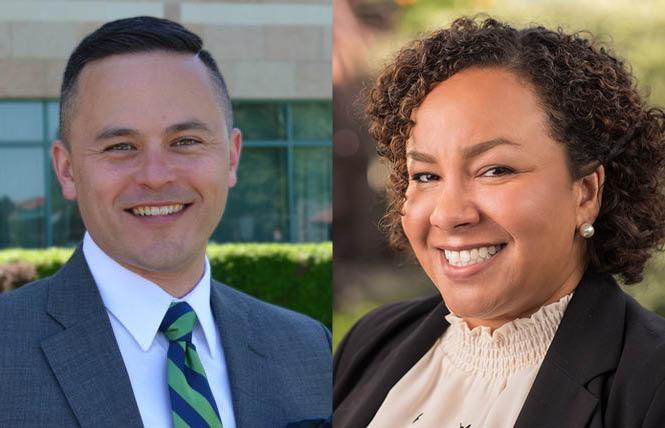 Two more out candidates are officially entering the 2022 race for the East Bay's open 20th Assembly District seat. The redrawn district now stretches from Hayward east to parts of West Dublin and Pleasanton and south to Union City in Alameda County.

Gay Dublin City Councilmember Shawn Kumagai, 44, officially launched his bid Monday, January 10, as the so-far only Asian and Pacific Islander candidate in the race. He is also the only elected official in the district, to date, to mount a campaign.

Queer former Santa Clara Valley Open Space Authority trustee Shanta "Shay" Franco-Clausen plans to officially launch her campaign for the seat January 28, two days after her 47th birthday. She and her wife, Yolanda Clausen, bought a home in Hayward in June, and as of December, Franco-Clausen has been living there full-time.

Assemblymember Bill Quirk (D-Hayward) has opted not to seek reelection and will instead retire when his term ends in December. Even prior to his making that decision, gay nurse and union leader Jennifer Esteen had entered the race for his seat, seeking to be the state's first Black LGBTQ legislator.

Like Esteen, should Franco-Clausen be elected to the Assembly seat then she would be the state's first Black LGBTQ legislator, as she is African American/Afro-Caribbean. Either woman would be the only current female LGBTQ legislator from the Bay Area if they win the race.

Fellow labor leader Liz Ortega-Toro, who is straight, is also seeking to succeed Quirk. She picked up an endorsement this month from former assemblymember Lorena Gonzalez Fletcher of San Diego, who resigned last week in order to lead the California Labor Federation come the summer.

At a "pre-announcement announcement" virtual event January 9 Kumagai noted that the new 20th Assembly District is an API plurality district. And with a number of API legislators having departed in recent months or set to retire later this year, he argued it was important to replenish their ranks in the state Legislature at a time when the API community has faced increased hate crimes and violent attacks.

"There is dwindling numbers of API legislators in Sacramento right now," noted Kumagai, whose father emigrated from Japan to the U.S. as a teenager. "There is a lot of concern that our representation is going down. In plurality API districts, it is important we put forward viable API candidates."

Kumagai, a United States Navy veteran, is using Navy blue and gold colors for his campaign logo. He is the first LGBTQ person to serve on the Dublin City Council, and his election in 2018 marked the first time an out LGBTQ person was elected to a city council seat in the Tri-Valley area of the East Bay.

Formerly a master chief petty officer in the Navy Reserve, Kumagai adopted his stepbrother, Kevin, after their mother died in 2015. He is now the fourth generation of their family to serve in the military, having recently joined the Army.

Kumagai spent his early childhood living in the Bay Area until his parents divorced when he was 10 years old. He moved with his mother to Phoenix, who was part of a military family. She served in the Army nurse corps, her brother served in the Air Force, and their father enlisted toward the end of World War II.

After college Kumagai enlisted with the Navy and was stationed in California, then Japan. He moved to Dublin in 2018 and had worked as an instructional design consultant but now is district director for Assemblymember Rebecca Bauer-Kahan (D-Orinda). An attendee of Kumagai's wedding to Alex Rafael, Bauer-Kahan is a leading endorser of his Assembly bid.

"I can not think of a better person to serve in the Legislature than Shawn," said Bauer-Kahan, who first met Kumagai five years ago, during his Sunday online event. "He is unwavering in his calm and ability to move ahead no matter what is coming at us."

Family roots in Oakland
From a family with roots in Oakland, though her mother gave birth to her while on a trip in Chicago, Franco-Clausen grew up mostly in San Jose. Most of her nine brothers and two sisters still live in the Bay Area, while her mom is in the process of moving back to Oakland from San Jose.

As West Coast region program director for IGNITE, which helps women run for public office, Franco-Clausen works on various political campaigns and advocates for legislation in Sacramento. In 2017, Franco-Clausen worked as a field representative for then-assemblymember Ash Kalra of San Jose, having managed his campaign. Currently in the 27th Assembly District, Kalra is seeking re-election this year in the newly drawn 25th district.

She first ran for political office in 2018, falling short in her bid to be elected the first lesbian on the San Jose City Council. She was appointed to the South Bay's open space authority board in December 2018 and stepped down from it last month.

At the same time Franco-Clausen resigned from her seat on the Santa Clara County Democratic Central Committee, which she was elected to in March 2020. She had been serving on it as a non-voting member and was censured by it in 2019 after learning about a fellow party activist's medical information from her wife, now a Palo Alto police detective, and then tweeting about it to several people.

Having solid roots in the South Bay, Franco-Clausen had been seen as a likely candidate for higher office in Santa Clara County. But priced out of the region and wanting to be closer to family, she and her wife over a year ago began looking at homes for sale in Alameda County, she explained in a recent phone interview with the Bay Area Reporter.

"This queer is here," Franco-Clausen joked of being an East Bay resident, having fully moved into her Hayward home December 16 after splitting her time for the second of half of 2021 at the couple's San Jose residence. "Most of my family lives here in the East Bay."

She has five children ranging in age from 16 to 30, with the oldest a lesbian. By relocating, Franco-Clausen noted, the family is nearer to relatives who can help out with their youngest son.

"We were trying to buy a house in the East Bay to be closer to family," explained Franco-Clausen when asked if she had moved with the intention to run for Quirk's legislative seat.

Most of her political work has been on issues relevant not only to South Bay residents but also to Quirk's constituents she now wants to represent in Sacramento, said Franco-Clausen. Her experience runs the gamut from helping to elect progressive leaders and lobbying for state bills, she noted, to helping pass criminal justice reform ballot measures.

Working toward a master's in public policy at Mills College in Oakland, Franco-Clausen told the B.A.R., "I have spent the last six years preparing myself to be an actual legislator."

With all three of the special elections, if no candidate receives more than 50% of the vote in April to serve out the remainder of the terms then the top two vote-getters advance to runoff races on the June 7 primary ballot. They would coincide with the primary races among the candidates seeking full two-year terms in the three seats on the November general election ballot.

In the East Bay race Suisun City Mayor Lori Wilson, the mother of a transgender son, is seeking the Assembly seat with the backing of Frazier and Congressmember John Garamendi (D-Walnut Grove). First elected to a city council seat in 2012, Wilson was elected in 2018 as the first Black female mayor of Suisun City and the first Black woman to win a mayoralty in Solano County.

Updated, 1/10/22: This column has been updated to include news about three upcoming special elections.

Updated, 1/11/22 to correct that Assemblymember Kalra is seeking reelection this year in the new 25th Assembly District.