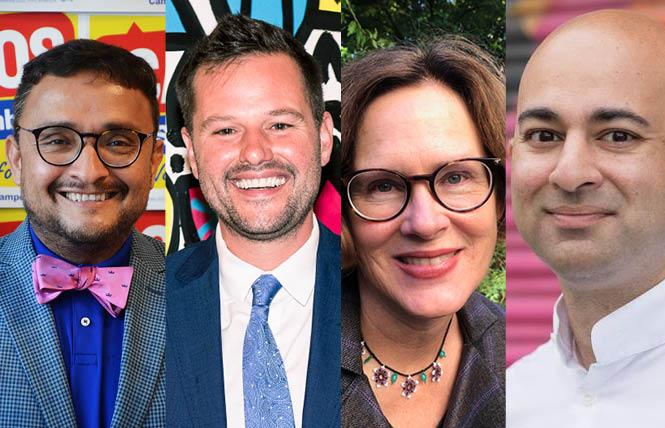 With ballots for San Francisco's February 15 special election expected to start hitting voters' mailboxes January 18, most of the city's elected leaders have already endorsed in the race for the open 17th Assembly District seat. Yet one name is noticeably absent among the endorsement lists for the four Democrats seeking the state legislative position.

Gay state Senator Scott Wiener (D-San Francisco), one of the city's highest-ranking LGBTQ elected leaders, has not endorsed any of the candidates. Nor does he plan to do so, he told the Bay Area Reporter.

"As of now I am staying out of it," Wiener said during a January 4 phone interview. "Things certainly can change, but at this point I have no intention of endorsing in the race."

He added of the contest, "this is a very strong field of progressive, hardworking candidates. One of them is going to be my colleague, and I look forward to working with whoever that is."

Wiener's decision is hardly a surprise, as the two leading candidates are both members of the local Democratic Party's progressive camp and didn't support Wiener, part of the party's more moderate wing, when he ran for reelection in 2020. District 6 Supervisor Matt Haney, a straight ally, and gay former District 9 supervisor David Campos had both endorsed Wiener's queer opponent, Jackie Fielder, in that race.

Wiener's remaining neutral is also reflective of the expectation that neither of the two more moderate Assembly candidates, who are both straight, is likely to advance to the runoff election April 19. The pair of contenders are City College of San Francisco trustee Thea Selby and former Obama administration staffer Bilal Mahmood, who will be holding a 2022 campaign kickoff at 11 a.m. Saturday, January 22.

Most political observers expect Campos and Haney to be the top vote-getters next month, but neither is seen as being able to secure the 50%-plus-one threshold needed to win the seat outright. According to polling from mid-December that Campos' campaign released, he was at 30% with "definite voters" and Haney was at 25%, while Mahmood was registering at 14% and Selby at 4%.

In the race for campaign contributions, Haney reported last week netting more than $675,000 to stake claim to having raised the most of any of the candidates. Campos' campaign told the B.A.R. he has raised more than $350,000. While official fundraising reports have yet to be filed with state elections officials, Mahmood has said he raised more than $450,000, while Selby had set a goal of raising $5,000 in the final weeks of December. (Her campaign didn't respond to an inquiry by the deadline to do so Friday on what her total amount raised was last year.)

The quintet is seeking to succeed former assemblymember David Chiu, who resigned in November when he became San Francisco's first Asian American city attorney. Also a Democrat, he too is remaining neutral in the contest to succeed him in the Legislature.

As one of the four candidates will be his new legislative colleague, Wiener told the B.A.R. he has made himself available to all of them in recent months.

"I have a complete open door to all four candidates. Whenever one of them asks for a meeting or a phone conversation, I make myself available," said Wiener.

Campos and Haney both noted to the B.A.R. that in various races, whether their own or that of other candidates, they have been on different sides than Wiener. Nonetheless, each said they have been able to work collegially with Wiener over the years and would do so serving alongside him in the state Legislature.

"I think it is quite something he hasn't endorsed against me," said Campos, noting he didn't have Wiener's support when he first sought the Assembly seat in 2014 and lost to Chiu.

"We have had some very positive conversations the last few months," added Campos. "We are both committed to working together if I am in the state Legislature."

Haney told the B.A.R. he feels he has "always had a good relationship with Senator Wiener," adding that he has supported numerous bills he has authored in Sacramento. "We have a very respectful and positive relationship. Even when on the other side of elections, we have always been very friendly. He can confirm, I think, we can work very well together."

The AD 17 seat covers the city's eastern neighborhoods, including LGBTQ districts in the Castro, Tenderloin, and South of Market. The winner of the special election will serve out Chiu's term through this December and needs to run for a full two-year term first in the June 7 primary then on the November ballot.

Should he win the race, Campos will not only return LGBTQ leadership from San Francisco to the Legislature's lower chamber, he will be the first Latino and first immigrant assemblymember from the city.

The city's other Democratic Assemblymember, Phil Ting, is backing Campos in the race. Ting did not respond to a request for comment for this article by the deadline to do so January 7.

But at a news conference in November with other Asian and Pacific Islander city leaders backing Campos, Ting noted that the two have a "long history together" of working to help other immigrant families like their own as well as middle class and low-income families in San Francisco.

"David is going to be the best representative to join me to continue that fight in Sacramento," said Ting.

In addition to voting by mail, as all currently registered voters will be mailed a ballot for the February 15 special election, people can also cast a ballot at the City Hall Voting Center beginning January 18. The last day to register to vote in order to receive a ballot in the mail is January 31, otherwise people can do so in person at the polling places that will be open on Election Day.

Also on the special election ballot is the recall against three San Francisco school board members: President Gabriela López, Vice President Faauuga Moliga, and Commissioner Alison Collins, who was ousted as vice president last year by her board colleagues. Assessor-Recorder Joaquín Torres is also seeking to serve out the remainder of former assessor-recorder Carmen Chu's term through early January 2023.

After Mayor London Breed named Chu as the new city administrator, she appointed Torres as her successor. Since no one else filed for the race, Torres is expected to easily retain the position come the February 15 election and will need to run for a full four-year term in November. His father is former state lawmaker Art Torres, who came out as gay when he stepped down as California Democratic Party chair in 2009.

For more information about how to vote in the special election, click here.

Gay Oregon House candidate ends campaign
Former San Francisco resident Kevin Easton, who had been the first openly gay man to run for Congress in Oregon, suspended his campaign last week in order to remain focused on his work for the state's government. He is the second out West Coast LGBTQ congressional candidate to end their bids for a House seat this month.

Easton, who had worked for former city attorney Dennis Herrera, was one of two out House candidates in Oregon. Lesbian former Santa Clara city councilmember Jamie McLeod-Skinner is making her second attempt to win a congressional seat from the Beaver State.

Easton was seeking to be elected in Oregon's new 6th Congressional District seat, which it gained due to the decennial census count. But he announced January 6 that he had decided to remain focused on his new job as a state investigator working on claimant fraud and misrepresentation in state and federal unemployment insurance programs.

"I love the work and I owe it to the taxpayers of Oregon to dedicate myself one hundred percent without the rigors of fundraising and running an adequate Congressional campaign," stated Easton. "I care deeply about federal policy and am very proud of the campaign we ran to this point. A huge thank you to all my supporters for believing in me. For personal and professional reasons, this just isn't my year to win elected office."

Gay former federal prosecutor Will Rollins is one of several Democrats running against conservative Congressmember Ken Calvert (R-Corona), who currently represents the 42nd Congressional District. They are now seeking the new 41st Congressional District that includes a large part of the Palm Springs area.

And Long Beach Mayor Robert Garcia could become the first gay Latino to represent California in the House. He is seeking the new 42nd Congressional District that is majority Latino.

Also seeking the open seat that includes a number of southwestern Los Angeles County cities is Assemblymember Cristina Garcia (D-Bell Gardens). Both of the current congressmembers who ended up in the new district, Alan Lowenthal (D-Long Beach) and Lucille Roybal-Allard (D-Downey), decided not to seek reelection this year.