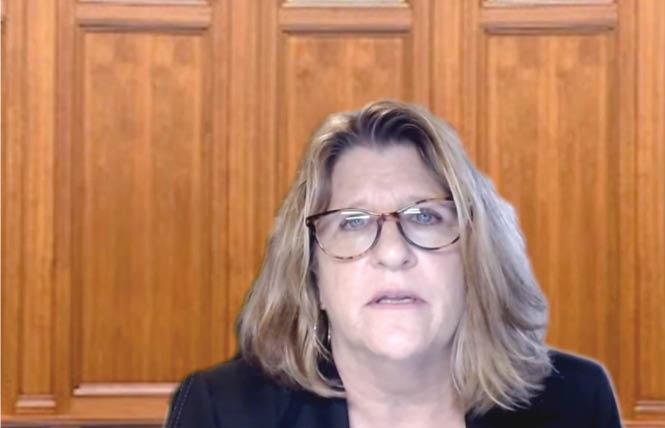 Justice Laurie M. Earl was confirmed and sworn in January 6 to a seat on the state's 3rd District Court of Appeal. Photo: Screengrab

With her confirmation to the state's 3rd District Court of Appeal, Justice Laurie M. Earl is now the fifth LGBTQ person serving on one of California's six appellate courts and the first on the 3rd District court bench. She was unanimously confirmed to the appellate bench and took her oath of office during a virtual hearing January 6.

Noting the historic nature of both her becoming an appellate judge, just the 10th woman to serve on the 3rd District, and its taking place on the one-year anniversary of the siege of the U.S. Capitol by backers of former President Donald Trump, a teary-eyed Earl said she was proud to reclaim the date for a more honorable historic moment.

As one of her two sons wrote in a text message to family and friends, "January 6, 2021 rioters broke through the glass doors to gain access to our nation's capital. January 6, 2022 Laurie M. Earl broke through the glass ceiling to gain access to the California Court of Appeal," recounted Earl. "I accept my role in history as being first and am honored to claim January 6 not as that day but as my day."

Earl had sought appointment to the appellate bench under former governor Jerry Brown but was not selected. She reapplied with Governor Gavin Newsom's administration in December 2019. In November, Newsom nominated Earl, 60, a fellow Democrat, to fill the vacancy created by the retirement of appellate jurist M. Kathleen Butz.

Born in San Jose and raised in Modesto, Earl graduated from UC Berkeley then earned her law degree at Lincoln Law School in Sacramento; she was named the law school's alumnus of the year in 2005 and 2012. In 1989, she joined the Sacramento County Public Defender's office as an assistant public defender.

Due to her time as a public defender, Earl said as a prosecutor she was able to recognize that it was "a person on the other side" of the courtroom and not "a bad guy." It also allowed her to understand "the mindset" of the people who appeared before her as a trial court judge.

"I learned a great deal as an assistant public defender in just human nature," said Earl. "I represented people who were, quite frankly, scared."

Sacramento County Superior Court Presiding Judge Michael Bowman said of his colleague, "She is kind, considerate, and helped raise a wonderful family." He added that Earl "will make an excellent justice; she already is an excellent judge. More importantly, she is an excellent person."

The two were often opposing counsel prior to their becoming judges, as Bowman was a criminal defense attorney. He recounted how Earl was "always prepared" and "always staunchly ethical."

He joked that his "ego won't allow me to say she was a better trial lawyer than me, but I can say it was close."

Having worked with Earl over the years, particularly on a contentious funding reform for the state's trial courts a decade ago, Slough noted that Earl approaches leadership positions with an "iron fist covered with a silk glove."

"She knew when and how to use each. Rarely did we see her take that silk glove off," said Slough, who formerly served on the San Bernardino County Superior Court. "Her willingness to be collaborative ... resulted in others acting in kind."

Slough added that Earl "has a strong work ethic and is committed to justice. She is a wonderful wife to her wife, Jody Cooperman, and a wonderful mother to her boys. I am sure they are the reason why she forged that iron fist under the silk glove."

Earl lives in Sacramento with Cooperman, her partner of nearly three decades. The couple married in 2008 and have two adult sons: Josh, 25, is in law school in Portland and Sam, 22, is in college in San Francisco and works at a vintage clothing store in the Haight.

She thanked her family for their support, as well as Newsom for having confidence in her becoming an appellate justice and the various legal groups that spoke up in favor of her confirmation.

"I am incredibly proud of them and my family," said Earl of her sons and wife as she choked up. "I wouldn't be here without my family's love and support."

She also took note of the "historic nature" of her confirmation while also saying she looked forward to the day where someone's "being the first," whether due to their ethnicity or sexual orientation, no longer was a main focus but a secondary mention because such firsts "had been exhausted."

"But today I will live in the glow of being the first and wear it like a badge of honor," said Earl. "Today, of all days, January 6 is now a date that needs to make room for the pride and honor I feel of being here today."

Earl said she shares Newsom's values of wanting to see a state judiciary reflective of California's residents in all of their unique characteristics and that a diverse court bench matters.

"I am proud of who I am and all of who I am has informed and guided me as a jurist. I am a woman, I am a wife, I am a mother, I am a daughter, a sister, a friend," said Earl. "I am a lawyer, I am a criminal defense attorney, I am a prosecutor, a teacher, a student and a trial judge. And, yes, I am a lesbian.

"Each part of who I am has given me perspective on the bench and, more importantly, has given me what I consider the most important personal attributes a judge should have: humility and the ability to always remember where you came from," she added.

Earl will earn $256,138 as an associate justice on the appellate bench.