Out in the World: Hong Kong lesbian pop star Denise Ho out on bail after arrest 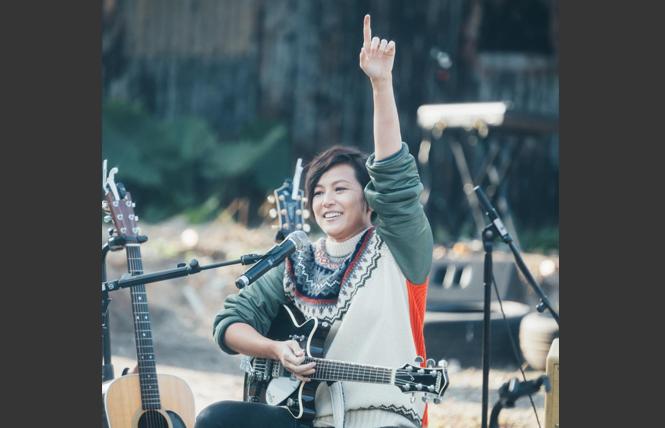 The show went on for Cantopop star Denise Ho's online concert January 2. Days before she was released on bail following her arrest and 36-hour detainment after Hong Kong authorities accused her of sedition and raided her home December 28. Photo Courtesy Facebook/Denise Ho

Hong Kong's National Security Police arrested Ho in her home December 28 allegedly due to her past board membership at Stand News, a pro-democracy media group.

Ho, 44, was one of six former board members of the independent media outlet who were arrested under the suspicion of "conspiracy to publish seditious material." They were taken to the Western Police Station. Ho resigned from Stand News' board in June, reported the Star Observer.

Authorities denied bail for editors Chung Pui-kuen and Patrick Lam the same day, reported Reuters. The editors were formally charged, along with the corporate entity behind the media outlet, Best Pencil (Hong Kong) Limited, with conspiring to publish seditious materials following the enactment of the new security law.

Reuters reported sedition is not among the offenses covered under the national security law imposed by Beijing in June 2020. The law covers terrorism, collusion with foreign forces, subversion, and secession. Recent court rulings and colonial-era laws covering sedition opened the gate for authorities to activate and utilize the new law against the media, including digital and social media, according to reports.

Authorities used the National Security Law to arrest and imprison Apple Daily owner Jimmy Lai, 74, for participating in a vigil marking the anniversary of the 1989 Tiananmen massacre in Beijing in August 2020. Jimmy Lai was sentenced December 28 to 13 months in prison for alleged conspiracy to print, publish, distribute, and sell "seditious publications." The arrests of the six Stand News board members and editors followed his sentencing, reported the Star Observer.

Authorities did not officially charge the board members with sedition, pending further investigations.

Stand News office raided, independent media outlets shutter
More than 200 police officers raided the Stand News office at the same time they arrested the board members and editors. Authorities froze more than $8 million of the newspaper's assets. The newspaper announced its closure in a statement 10 hours after the arrests and raid. Patrick Lam resigned and the newspaper's staff were immediately dismissed. Its Twitter account was deactivated.

Hong Kong was returned to Chinese rule from British rule in 1997. China agreed to retain democratic principles, including a free press, until 2047. However, in recent years, China has restrained Hong Kongers' freedoms amid violent demonstrations, especially in 2020 and 2021. China's crackdown on dissenters now goes far beyond its borders, reaching citizens abroad on Facebook, Twitter, and other social media networks, reported the New York Times.

Citizen News, a smaller online pro-democracy newspaper, cited what happened to Stand News when it announced its closure January 3.

The United States, Canada, and other Western nations expressed their concerns, criticizing China and Hong Kong officials for their actions.

Canadian Foreign Affairs Minister Mélanie Joly tweeted, "Canada will always stand up to support democracy and freedom of the press. We are deeply concerned by the arrests in Hong Kong of current and former board and staff members from Stand News, including Canadian citizen and activist Denise Ho."

U.S. Secretary of State Antony Blinken said in a December 29 statement, "Journalism is not sedition."

Blinken called upon the China and Hong Kong authorities to "cease targeting Hong Kong's free and independent media and to immediately release those journalists and media executives who have been unjustly detained and charged."

He added, "A confident government that is unafraid of the truth embraces a free press."

Chinese and Hong Kong authorities pushed back against the international criticism.

The Chinese foreign ministry's Hong Kong office insisted that freedom of the press was being used as an excuse to disrupt stability within the city, Reuters reported.

"Those who engage in activities that endanger national security ... under the cover of journalism are the black sheep tarnishing the press freedom and will be held accountable," the ministry said in a statement.

Carrie Lam told reporters, "These actions have nothing to do with so-called suppression of press freedom. Journalism is not seditious ... but seditious activities could not be condoned under the guise of news reporting."

Li Kwai-wah insisted the police were "not targeting reporters, we are not targeting the media, we just targeted national security offenses."

Democracy's songbird
Following her detainment, Ho posted on Facebook, "Folks, back home. A little tired at the moment, but both physically and mentally are (sic) well. Thanks to each of you for your love."

"The song is still to be sang," she wrote at the end of the post. Her January 2 online concert took place as planned.

The pop star was born Denise Ho Wan-see in Hong Kong and raised in Montreal, Canada, where she is a citizen, before returning to "Asia's World City."

A documentary, "Denise Ho — Becoming the Song," about her rise to fame, coming out as a lesbian in 2012, and her pro-democracy activism in Hong Kong discussed the toll her outspokenness for democracy and LGBTQ rights has taken, the Bay Area Reporter previously reported.

China punished the singer by allegedly influencing concert halls and stadiums around the world not to book her shows to silence her. It hasn't stopped her. She's spoken before the United Nations and the U.S. Congress.

In 2019, Ho urged members of the U.N. Human Rights Council to "protect the people of Hong Kong and remove China from the council."

Single-sex schools face a dilemma over admittance criteria based on gender identity or biological sex. The trust fears admitting transgender students will "jeopardize" the status of single-sex institutions, reported the Daily Mail.

A new section in the gender identity policy guidance document that addresses transgender student applications states the schools would not accept potential students who are legally biologically male, even if they identify as women. The rule is based on the 2010 Equality Act, which only allows an exemption for the schools to operate based on biological sex.

The trust claimed a policy on gender — rather than the sex recorded on a birth certificate — would jeopardize a school's standing as a single-sex institution.

Legally unclear and unwise
The Trans Legal Project told Pink News that the trust's legal arguments immediately pose two legal questions: the jeopardy question regarding admitting a transgender girl into an all-girls school and clarity of the law when it comes to transgender and nonbinary students.

An unidentified spokesperson from the Trans Legal Project questioned the validity of admitting a transgender student would jeopardize the single-sex status of a girl's school.

Secondly, the "law is not clear" about whether an all-girls school can "simply refuse to admit a trans girl."

Julie McCulloch, director of policy at the Association of School and College Leaders, agreed with the Trans Legal Project's assessment of the clarity of the law when it comes to transgender students.

Recognizing the potential for more students to identify as transgender and transition while in school in the future, she called upon the government for clear guidelines for schools for transgender students.

"It is a really big issue and the lack of formal guidance for schools is something that we are concerned about," McCulloch told the Telegraph. She added, "For this reason, GDST schools do not accept applications from students who are legally male.

Right before the group of girls schools announced its new policy, the Women and Equalities Committee, chaired by Tory MP Caroline Nokes, completed a year-long study addressing many issues regarding transgender rights and policies that included schools.

The committee did not come up with policies, but echoed the Trans Law Project and McCulloch and said there needs to be "better guidance on the single-sex and separate-sex exceptions." The committee called upon the government to study case studies and worked examples and to collaborate with "trans rights groups, on best practice to provide trans and non-binary inclusive and specific services."

Until there are clear laws with guidelines and policies in place, the Trans Law Project said the best situation is to take a case-by-case approach.

"Case law and statutory guidance covering gender reassignment in other areas suggest a case-by-case approach should always be taken," the spokesperson added. "This would seem to be the most legally defensible and the fairest way to proceed."

McCulloch said, "We will, however, continue to monitor the legal interpretation of this exemption."

The Facebook page, TransBike Europe, has since been deactivated, but Bart Bloem Herraiz, who earned their undergraduate degree in outdoor tourism management and studied sport sciences, is still interested in transgender people's outdoor adventures.

Bloem Herraiz is working on their Ph.D. at the University of Vic in Spain. They are focusing their dissertation on transgender people's experiences with outdoor adventures such as cycling, climbing, hiking, skiing, and other outdoor activities and looking for research participants.

Bloem Herraiz, who uses sports to propel them over fear and obstacles, told the B.A.R. at the time, "I would like for other trans people to see that if you really want to do something, you just have to dream about it and fight for it."

Transgender people are capable of doing "everything they want to and that they'll overcome the difficulties that might occur along the way."

Anyone who identifies as trans, nonbinary, or gender-nonconforming can contact Bloem Herraiz on WhatsApp at +34 - 644 258 509 or email at bartbloemh@gmail.com

Got international LGBTQ news tips? Call or send them to Heather Cassell at WhatsApp/Signal: (415) 517-7239, or oitwnews@gmail.com

Out in the World: LGBTQ Afghan refugees among those welcomed in Canada
Sign up!