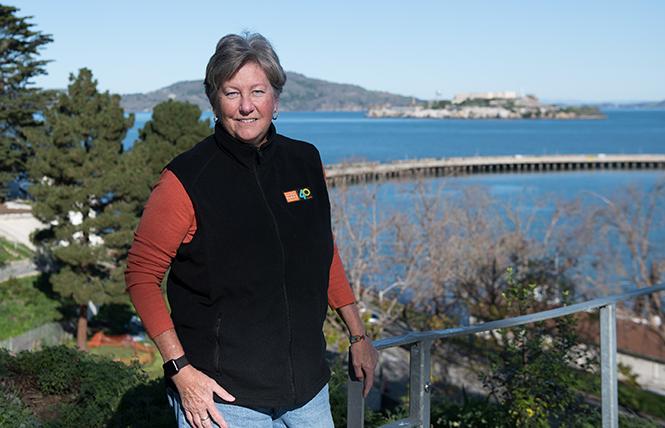 Since the summer the Golden Gate National Parks Conservancy has been celebrating its 40th anniversary as the philanthropic partner to the Bay Area's sprawling urban national park. As it heads into 2022, the nonprofit will be helping the Golden Gate National Recreation Area mark its 50th year in existence and celebrating the creation of a new park site on the northern edge of San Francisco.

Leading the parks conservancy as it does will be its president and CEO, Christine Lehnertz, a lesbian who has a particular familiarity with the nearly 83,000 protected acres across San Mateo, San Francisco, and Marin counties. Between May 2015 and August 2016 she served as the GGNRA's first female superintendent.

"I was a convert to what the value of a national urban park is," Lehnertz recalled in a recent interview with the Bay Area Reporter. "I had connections with big wild parks. As superintendent here, I learned the significance of a national park in an urban place is just extraordinary."

The parks conservancy was formed on August 11, 1981 and has raised more than $624 million during its four decades of financially supporting numerous restoration projects and building renovations throughout the GGNRA.

"The 40th anniversary is such an opportunity to celebrate four decades of park transformation and what is the possibility for the future," said Lehnertz, 60, while speaking with the B.A.R. in the community garden at Fort Mason behind the building that houses the parks conservancy offices. "It is part celebration of the past and a vision for the future. It is not just a birthday party."

Lehnertz and her wife, Shari Dagg, now reside in one of the residential buildings in the Presidio, a former army base turned national park that is partly managed by the GGNRA and supported by the parks conservancy. The majority of it, however, falls under the jurisdiction of the Presidio Trust.

The parks conservancy partners with the trust to improve the visitor experience to the Presidio and upgrade its natural landscapes. Last December saw the opening of Quartermaster Reach Marsh, the nearly seven-acre site situated next to Crissy Field Marsh; the parks conservancy supported the $23 million project as well as the $118 million in additional park upgrades planned for that area of the Presidio.

A short walk from the parks conservancy offices is the newly restored Black Point Historic Gardens, with sweeping views of the bay, Alcatraz Island, and the city skyline. The parks conservancy worked with the parks service and scores of volunteers over the last four years to excavate the roughly one acre terraced hillside and revegetate it with native plants.

"We are the plus-up, the add-on," Lehnertz said of the parks conservancy's work.

Tunnel Tops
The parks conservancy also was involved with the creation of the William Penn Mott Jr. Presidio Visitor Center, which cost $5 million and opened in 2017 at 210 Lincoln Boulevard. The former guardhouse in the park's Main Post area will soon be at the entrance into the new Presidio Tunnel Tops site opening this spring. The 14 acres of parkland sit atop highway tunnels that replaced the former Doyle Drive leading from the Golden Gate Bridge into San Francisco's Marina district.

"Tunnel Tops is a big deal," said Lehnertz. "It is about to change the face of San Francisco."

"We were thinking it would be a 21- or 30-day period of incubation," recalled Lehnertz, noting the nonprofit has experience in seeing national parks be mothballed during government shutdowns of the past.

It came as no surprise to see the public access the parks during the health crisis in greater numbers, said Lehnertz, as they can be safely utilized in adherence with mask mandates and social distancing requirements. She noted that on any Tuesday during April last year there were far more people at Crissy Field than would have been there a year prior.

"People gravitated to the parks," she noted. "They didn't need to do anything. The parks just had to be there."

Long parks career
As the B.A.R. noted in a 2016 profile of Lehnertz, she first joined the National Park Service in 2007 and served as the deputy superintendent at Yellowstone National Park. She then spent five years as regional director of the park service's Pacific West region.

While her time overseeing the GGNRA coincided with a number of controversies, foremost dog rules at various sites, Lehnertz won plaudits for how she approached the job of superintendent. Congressmember Jackie Speier (D-San Mateo/San Francisco) had told the B.A.R. that Lehnertz "is very engaging and a likeable person. She represents the National Park Service well."

Reassigned to oversee the Grand Canyon National Park following revelations of a history of sexual harassment there, Lehnertz became its first female superintendent. She faced complaints that she bullied and retaliated against some male leaders at the park and misspent funds. But as NPR reported in March 2019, a lengthy federal investigation exonerated her of the charges, which that February had been deemed to be unfounded.

Being asked to address what Lehnertz called "systemic organizational trauma" at the Grand Canyon "was a pretty big honor, terrifying, and a place I could make a contribution to," she said. "And all those things came true."

Nonetheless, Lehnertz said more needs to be done to bring about necessary changes in the park service so it becomes "more inclusive, more open, and a more supportive workplace. That work will never be done, like with any other organization."

By May 2019 she had ended her career with the federal agency and returned to the Bay Area to take over leadership of the parks conservancy as its first female president and CEO. According to its 2020 tax filing, she earned $366,492 in total compensation while the nonprofit had revenues of $60,862,358.

"Moving from the federal government to the nonprofit was the right move," said Lehnertz.

Wearing her park service uniform "was an honor" and her daily ritual of polishing her badge and belt "I will always hold on to that," said Lehnertz, who donated her required attire, including wide-brimmed hat, to a program that allows new park service employees to acquire for free pieces of their wardrobe they may not otherwise be able to afford.

As the GGNRA's booster group, the parks conservancy steers clear of the managerial fights over its vast sites and focuses on supporting its mission and helping connect the public to its various offerings. It also is free to highlight the park units' diverse histories and explain to visitors how climate change, from rising seas to increased fire risks, is impacting them.

"The world is changing. We can use the parks to help people explore and understand what those changes mean," said Lehnertz.

She was laudatory of the two leaders President Joe Biden has put in charge of overseeing the park service, its first Native Americans to hold the posts. Charles F. "Chuck" Sams III was ceremonially sworn in as director of the National Park Service December 16 by Secretary of the Interior Deb Haaland, who in November had visited the GGNRA.

"Both are strong leaders who have a deep commitment to this land and this history and how it can be shared," said Lehnertz, who accompanied Haaland during her visit to Alcatraz Island and other local park sites. "Both have very strong environmental ethics."

To learn more about the Golden Gate National Parks Conservancy and how to become a member, click here.

Editor's note: Matthew S. Bajko has been a paid member of the parks conservancy for years.

UPDATED 1/3/2022 to correct the cost of the Quartermaster Reach Marsh restoration project. 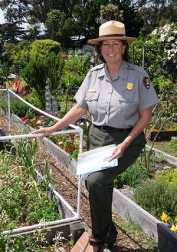 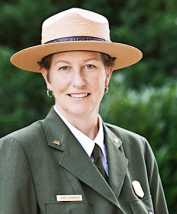