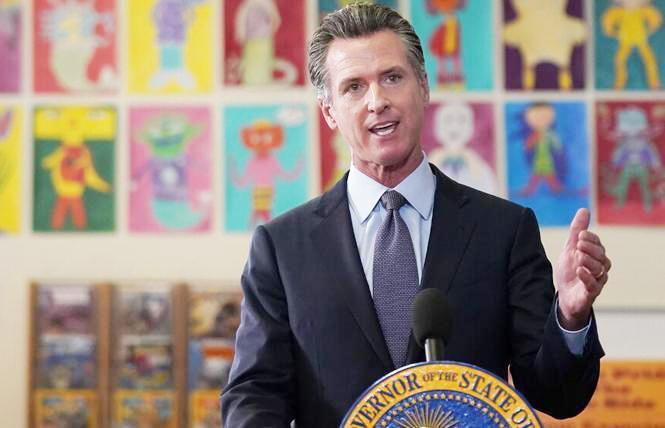 A slew of new LGBTQ laws in California will go into effect in 2022, from ending gender-based toy aisles and protecting transgender students and LGBTQ households to enhancing services for older adults living with HIV. Most will kick in as of January 1, while one protecting health care patients' privacy will become operative in the summer.

Under Assembly Bill 1084, authored by gay Assemblymember Evan Low (D-Campbell), retailers with 500 or more employees must remove signs that say "boys" and "girls" in toy and child care sections or provide a gender-neutral retail section for the items. Low and co-author Assemblywoman Cristina Garcia (D-Bell Gardens) dropped the inclusion of children's clothing sections in order to get their bill passed.

Retailers have until January 1, 2024, to comply with the law. After that date any retail department store not in compliance with AB 1084's provisions will be liable for a civil penalty not to exceed $250 for a first violation or $500 for a subsequent violation.

"My hope is this bill encourages more businesses across California and the U.S. to avoid reinforcing harmful and outdated stereotypes," Low stated after Governor Gavin Newsom signed it into law.

The California Retailers Association directed questions about implementation of the law to the Toy Association. The trade association, which represents 950-plus businesses in the annual $32.6 billion U.S. domestic toy market, did not respond to a request for comment by the Bay Area Reporter's December 29 print deadline.

Under AB 746, authored by lesbian Assemblymember Sabrina Cervantes (D-Corona), same-sex couples should find it easier to complete stepparent adoptions as the law streamlines the process across the state. It ensures couples seeking to have one partner become a stepparent are not required to be married or in a legal union for a minimum amount of time, or to have a specific income or education level, in order for the adoption to be granted.

Some county superior courts have been imposing more stringent requirements than what the state requires of stepparents wanting to adopt. In some counties couples have been required to be in legally recognized unions for at least a year before their adoption is granted. Yet state law does not require that couples must be married, or in a civil union or domestic partnership, for a minimum amount of time before seeking a stepparent adoption.

"These requirements, which county court systems currently have discretion to impose, hinder and prolong the adoption process for LGBTQIA+ couples," noted Cervantes, who has triplets with her wife.

AB 245, titled "Affirming Transgender and Nonbinary Student's Names in College," requires California's community colleges and public universities to use current transgender and nonbinary students' lived names even if they have not legally changed their names. Meanwhile, graduates or former students who left campus for whatever reason can petition their alma mater to upgrade their name and gender on their academic records.

But they would have to do so legally, as the bill requires they show a government-issued document like a driver's license, birth certificate, or passport bearing their current name and gender. Commencing with the 2023-24 graduating class, the institutions will be required to allow graduating students to request that their diploma list their chosen name without having to provide legal documentation that they have officially changed their name or gender.

Former assemblyman David Chiu, now San Francisco's city attorney, authored AB 245. He had earlier pushed through a law requiring public K-12 schools in the state to update the records for transgender and nonbinary students so that they match their legal name and gender identity.

A year ago the UC system released its own policy requiring its campuses to use students' lived names on their academic records by December 31, 2023. City College of San Francisco last year made the use of chosen names mandatory except for certain financial and legal documents.

Due to AB 439 authored by Assemblywoman Rebecca Bauer-Kahan (D-Orinda), there will now be a nonbinary option on death certificates. The only options on the forms had been female or male.

In a related matter, the state public health department is to launch a three-year pilot program with coroners and medical examiners in up to six counties to identify and collect the sexual orientation and gender identity of victims in violent death cases. As outlined under AB 1094 authored by Assemblymember Dr. Joaquin Arambula (D-Fresno), the SOGI data is to be gathered in all homicide and suicide cases.

The pilot program is expected to launch in July. The California Department of Public Health told the B.A.R. it plans to recruit counties to participate at that time.

The San Francisco Office of Chief Medical Examiner told the B.A.R. it "looks forward to having a conversation" if it is invited by the state to participate. It added that its "death investigations seek to include all relevant information to determine death's cause and manner and ensure the death certificate reflects the decedents lived gender identity."

Because of Senate Bill 258 by gay state Senator John Laird (D-Santa Cruz), older people with HIV will now be part of the population of "greatest social need" when it comes to programs and services administered by the California Department of Aging. Because having HIV is no longer a death sentence as it was for most people at the start of the AIDS epidemic, many people living with HIV/AIDS are now in their 50s or older and require various aging-related services.

As of July 1, health care providers will be barred from disclosing services a patient receives under an insurance policy held by another person, such as a parent or spouse. Thus, a youth receiving transgender health care under their parent's policy can request their health provider not inform them their child is receiving such care if they are not out about their gender identity.

The new policy is due to AB 1184, which Chiu also authored. In addition to gender-affirming care, behavioral health care and substance use care are also covered under the law. A patient whose information is disclosed against their wishes could sue their health insurer for compensatory damages, punitive damages not to exceed $3,000, attorney's fees not to exceed $1,000, and the costs of litigation.