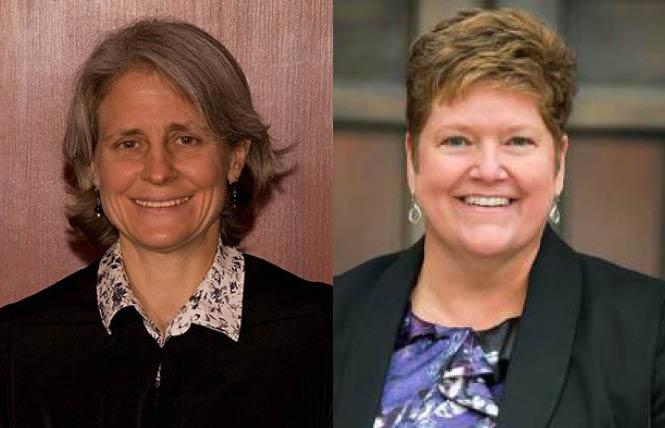 When Congress returns after Labor Day, the U.S. Senate Judiciary Committee will begin deliberation of the first nomination of an LGBTQ person to serve on a federal appeals circuit court bench.

President Joe Biden nominated two LGBTQ people to serve on federal court benches in August: Beth Robinson of Vermont to the 2nd U.S. Circuit Court of Appeals and Charlotte Sweeney of Denver to the U.S. District Court for Colorado. Both are historic.

"These choices also continue to fulfill the president's promise to ensure that the nation's courts reflect the diversity that is one of our greatest assets as a country — both in terms of personal and professional backgrounds," the release stated.

Prior to joining the Vermont Supreme Court in 2012, Robinson played a key role in the litigation and organization surrounding the historic achievement of the nation's first civil unions law in Vermont in 2000 and the Legislature's passage of marriage equality nine years later. She then became chief legal counsel to then-Vermont Governor Peter Shumlin, a Democrat, who nominated her to the state's highest court.

Vermont's current governor, Phil Scott, a Republican, issued a statement, calling Robinson "a steadfast public servant for the people of Vermont" and said she has "served admirably on the Vermont Supreme Court."

"She will make a great addition to the United States Court of Appeals for the Second Circuit, bringing the Vermont values of commitment to justice and equality, fairness, and freedom & unity to the bench," Scott stated. "I applaud the president for making this historic nomination, and I urge the United States Senate to move expeditiously toward her confirmation."

"As a civil litigator specializing in constitutional law and LGBTQ rights, Beth served as co-counsel the Baker v. State of Vermont lawsuit, in which the Vermont Supreme Court ruled that the state's prohibition on same-sex marriage denied equal rights guaranteed by the Vermont Constitution," noted Leahy in a statement. "Beth's success in the Baker case directly resulted in Vermont's enactment of the first civil union law in America." As a state supreme court justice, Robinson, said Leahy, "has been widely praised as a consensus builder who is impartial and deeply dedicated to the fair application of the law."

Last year, USA Today named Robinson as one of Vermont's top 10 women in Vermont to make contributions to the state.

GLAD civil rights project director Mary Bonauto issued a statement saying she was "thrilled" with Robinson's nomination, saying Robinson has a "deep commitment to the rule of law and to the principle of equal justice under law for all who come before the court. ..."

"That her confirmation would make her the first openly lesbian judge to serve on a U.S. appellate court further marks a pivotal moment for our country, one that hopefully signals a welcome expansion of wider representation and diversity of perspectives on our nation's high courts," said Bonauto.

Colorado nominee
Sweeney is a partner in a Denver firm that specializes in cases involving employment discrimination. She helped establish the state's Equal Pay for Equal Work law and was active in the Colorado Bar Association's leadership. She serves as treasurer of the Matthew Shepard Foundation.

In March, Biden promoted Elaine Kaplan to become chief judge of the U.S. Court of Federal Claims. She has been serving on the court since 2013, when Obama appointed her. The Federal Claims court addresses cases involving lawsuits against the federal government involving such matters as tax refunds, federal contracts, and federal takings of private property.

The Senate so far this year has confirmed four circuit court judges nominated by Biden and five district court judges. Robinson is now one of three nominees pending appointment to federal appeals benches (two of them to the 2nd Circuit, which covers Connecticut, New York, and Vermont).

Lesbian confirmed by US Senate to federal appeals court
Sign up!