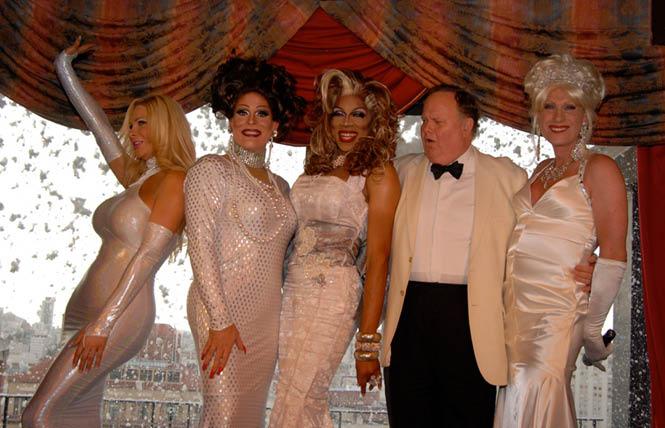 Harry Denton, fourth from left, welcomed guests at the "Sunday's A Drag" Christmas show in 2010. Donna Sachet, who ran the show, is at right. At far left is Cassandra Cass, who is joined by fellow performers Kendra Monroe and Mahlae Balenciaga. Photo: Steven Underhill

Harry Denton, a gay man and club owner who came up with the idea for the popular former "Sunday's A Drag" show at his eponymous Starlight Room atop the Sir Francis Drake Hotel in San Francisco's Union Square, died August 22. He was 77.

According to the San Francisco Chronicle, Mr. Denton died in Seattle, where he had been living in the care of his brother, Jim Denton, since suffering a major stroke several years ago in San Francisco. He passed away in a nursing home of natural causes, his brother told the paper.

While Mr. Denton ran several bars over the years, he is best known for Harry Denton's Starlight Room at the Sir Francis Drake. There, he started the drag brunch, which ran for 12 years and included drag personality Donna Sachet, a one-time society columnist for the Bay Area Reporter, and a stable of drag artists.

In a brief phone interview August 26, Sachet said she will miss her friend.

"I owe him a lot," Sachet said. "He brought to downtown entertainment from our community — drag — and to a Union Square hotel. The city owes him a lot."

Sachet also posted on Facebook: "Once again my heart is heavy at the news of the death of Harry Denton, a dear friend, host with the most, and personal hero of mine. We worked together very closely for most of the 12 years of 'Sunday's a Drag' at the Starlight Room of the Sir Francis Drake Hotel. Together with the incomparable Michael Pagan and an extremely talented cast, we created something hard to believe, but perfect for San Francisco, and the crowds applauded their approval. Harry's love of San Francisco rivaled my own and he kept the show in the press regularly. He shared with me that he often had a tear in his eye as I ended each show with 'I Left My Heart in San Francisco.' The city has lost a great man and I have lost a wonderful friend."

In a message posted to the show's Facebook page August 23, the performers mourned Mr. Denton's passing, calling him a "legend" with "a personality larger than life. Harry sure knew how to throw a party and charm a crowd, brightening any room he walked into."

Part of "San Francisco royalty" and an entertainer in his own right who owned "one of the most popular night spots in the city," Denton was someone "everyone knew," noted the performers. "Today, we that were part of 'Sunday's A Drag' will cherish the great memories we had with Harry Denton and always remember the Starlight that he was."

"Harry was larger than life and that was the way he lived," Wong wrote in an email to the B.A.R. "We traveled to Rio de Janeiro together back in 2001 and he fell in love with the city and its people because like him, Brazilians are a vibrant and fun-loving people. We even scouted a possible location for a Harry's Bar in Rio right across the street from the gay beach in Ipanema.

"Although many saw Harry as an extrovert, which he was, I also saw a part of him that was shy like a little boy when he encountered someone he liked," Wong added. "At a gay party in Rio he was so shy he said to me, 'Lawrence, don't leave my side.' Ultimately, Harry was still that little boy from Idaho but he sure dazzled us big time when he wanted to. San Francisco is less colorful now without Harry."

"A wonderful supporter of REAF over the years," the foundation wrote on Facebook. "He was a true San Francisco icon and always the life of the party. He will be very much missed but his legend will live on."

In a 2011 SF Gate article by Carolyne Zinko, Mr. Denton talked about his unit in the Bushwick Apartments on Bush Street where he lived with his calico cat, Scarlett.

"The impresario likes to do things his way, so he turned the living room into a bedroom, and the dining room into the living room," Zinko wrote. "The original bedroom is a closet for his many suits, shirts and pairs of shoes, which at last count numbered 113 pairs. The kitchen has a baby grand piano tucked into an alcove, a gift from a friend that would fit nowhere else."

"My whole life is about taking what's normal and doing the opposite," Mr. Denton told Zinko. "I mean, I'm gay, and I have a straight bar. I'm surrounded by beautiful women who aren't women. I like turning things upside down."

Mr. Denton was born November 3, 1943 and raised in Kimberly, Idaho, outside of Twin Falls, the Chronicle obituary stated. His dad, Bob, ran a packaging plant for beans and peas. Mr. Denton grew up a shy child who liked to play piano and help his mother, Harriet, shop for her clothes. He was president of his senior class at Kimberly High School.

Mr. Denton arrived in San Francisco in the early 1960s. The Chronicle noted that he "worked at various joints around town and gained fame as the host at the Washington Square Bar & Grill under another charismatic barman, Ed Moose. After leaving the Square, he opened a succession of bars and nightclubs bearing the name Harry's."

"But his empire wasn't built to last," the Chronicle reported. "First he was convicted in a money-laundering scheme and lost control of Harry's on Steuart Street, then one by one he lost control of the other joints. His contract with the operators of the Drake Hotel expired and was not renewed, and his name was taken down from all signage except the marquee."

A memorial service is pending.

Updated, 8/26/21: This story has been updated with comments from Donna Sachet,.