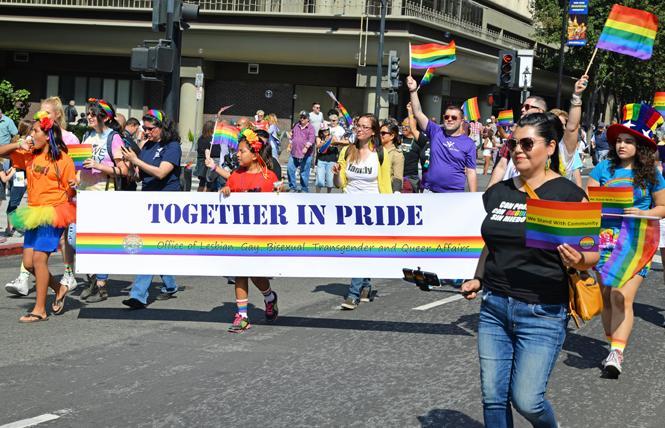 This weekend Silicon Valley Pride is hosting the Bay Area's first in-person Pride parade and festival since the beginning of the COVID-19 pandemic.

The theme this year is "Standing for Love and Liberation."

A lineup of events was planned to precede the parade and festival — including a flag-raising at San Jose City Hall by San Jose City Councilmembers Pam Foley and Dev Davis, both straight allies. The two were to raise the Pride Progress flag at 5 p.m. August 24, and light the building in rainbow colors, but in a sign of the times, the event had to be canceled at last minute after demonstrators protesting a proposed COVID-19 vaccine mandate shut down a City Council meeting.

The proposed mandate, proposed by the San Jose Mayor Sam Liccardo, would require proof-of-vaccination to be shown at events of over 50 people at city-owned facilities.

"Due to unsafe and aggressive actions and language observed today at San Jose City Hall of protesters concerned with the potential vaccination mandate, we are postponing the flag raising and lighting ceremony until a later date and time," Foley stated via Twitter, who added that the decision was made in consultation with members of the Silicon Valley Pride board. "Starting tonight, however, the City Hall Tower and Rotunda will be illuminated in bright rainbow colors and the rotunda in trans-themed colors."

Saldy Suriben, a gay man who is the chief marketing officer for Silicon Valley Pride, stated via email August 25 that "We didn't expect protesters will be present during the City of San Jose Council meeting."

"Yesterday, we were asked to move with the Mayor, councilmembers, and city staffs to a secure room during the event that took place," Suriben continued. "We all agreed not to proceed."

The flag-raising has been rescheduled for August 26 at noon, Suriben concluded.

For Pride weekend, a Night Festival kicks off the festival at 6 p.m. Saturday, August 28, at the Plaza de César Chávez in downtown San Jose, according to Suriben. There is no cost to attend, according to the event's website.

"On our main stage we have Thea Austin from 'Rhythm is a Dancer' and Snap," Suriben said.

A two-hour parade kicks off at 10 a.m. the following morning at Julian and Market streets and ends at the plaza.

"We want to highlight our parade," Suriben said. "People should come because it's a celebration for being who we are — being our 100% authentic self without hiding — and there's always a celebration when we can celebrate Pride."

Afterward a Day Festival will occur at the plaza from noon to 6 p.m. This year the festival is free, according to Silicon Valley Pride's website.

"Our headliner is Estelle, who you may remember from the hit song 'American Boy' and as the voice of Garnet from the animated series 'Steven Universe,'" Suriben said. "Our main stage always has been a dancing area and people can dance."

As of press time, Suriben has not responded to a follow-up question as to whether masks will be mandated at the event. As the Bay Area Reporter previously reported, Megahood 2021 (this year's rebranding of the Folsom Street Fair) will be requiring masks for attendees as it is expecting over 10,000 people, and statewide guidelines mandate masks for outdoor gatherings of that size or larger. Other LGBTQ street fairs and outdoor events planned for this summer and fall are either not requiring masks or are unsure at this time.

Nathan Svoboda of Project MORE, a South Bay LGBTQ+ advocacy nonprofit, said that there will be COVID vaccination opportunities on-site during Pride weekend.

"We encourage people to come out — mindful that we're still in a pandemic — and to wear a mask as appropriate," Svoboda said.

This year's celebration holds particular weight for the Qmunity District. Svoboda said that hopefully Silicon Valley Pride weekend will make more people aware of the LGBTQ district and encourage them to get involved.

"We're very excited about that," Svoboda said. "It's the first time we will be able to promote, do outreach, and engage with the community in a concentrated effort. Our booth will be very much focused on the Qmunity District, telling people about it, about activities in the community, and giving folks a quick survey asking what they want to see in the district."

When asked about which activities in the community they'll be promoting, Svoboda said that on September 18 there will be an LGBTQ Jubilee Wellness Festival. The free festival on Post Street will be raising money and awareness for local HIV/AIDS services.

South Bay events all week long
LGBTQ people and allies have events this week leading up to the Pride parade and festival, Suriben said. While the Tuesday flag-raising was postponed, on August 25, from 5:30 p.m. to 8 p.m., a free Black and Pink Pride Dance Party will celebrate female-identified members of the community at the Silicon Valley Capital Club at 50 West San Fernando Street in San Jose. The following night, from 6 p.m. to 8 p.m., the same location will be utilized for Pride in the Penthouse, which is also free.

On August 25, from 5:30 to 8 p.m., a free Black and Pink Pride Dance Party will celebrate female-identified members of the community at the Silicon Valley Capital Club at 50 West San Fernando Street in San Jose. The following night, from 6 to 8 p.m., the same location will be utilized for Pride in the Penthouse, which is also free.

Finally, on August 27 from 6 to 10:30 p.m., a free program of entertainment called Out at the Ballpark will be held at the Excite Ballpark at 588 East Alma Street in San Jose, home of the San Jose Giants, the Low-A minor league affiliate of the San Francisco Giants. Suriben said that this will include a performance by CHEER SF.

Updated, 8/24/21: This story has been updated to report that Tuesday's Pride flag-raising was canceled due to anti-vaxxers protesting a city vaccine mandate in city-owned buildings.