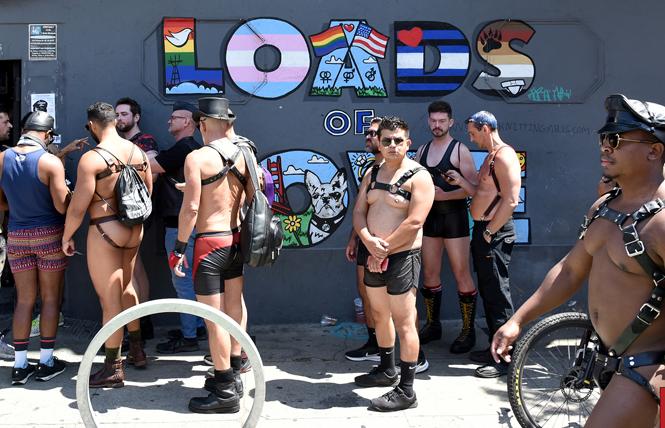 People line up outside the Powerhouse bar during Folsom Street Market in late July. Photo: Gooch

A number of LGBTQ-themed outdoor street festivals are taking place in the coming weeks, but so far, only one is requiring attendees to wear face coverings.

Megahood 2021, produced by Folsom Street Events on September 26, will require people to wear masks, as the Bay Area Reporter previously noted. The decision is because organizers expect attendance to exceed 10,000 people, which triggers the city's outdoor mask mandate. As the B.A.R. recently reported, some attendees at the Folsom Street Market street fair and its associated indoor events reported becoming sick from COVID-19 in the days after the July event that replaced the Up Your Alley street fair.

Other upcoming street fairs have not made a decision on face coverings, did not respond to a request for comment, or said attendees won't be required to wear one. The COVID-19 virus is far less transmissible in outside environments, though how much so is a matter of debate, especially regarding the highly contagious Delta variant.

The San Francisco LGBT Pride Celebration Committee will hold an LGBTQ Freedom Day Festival in the Mission neighborhood to coincide with National Coming Out Day Sunday, October 10. It will take place from 11 a.m. to 6 p.m., according to SF Pride's announcement. The city's Fleet Week activities take place the same weekend.

"This street fair will take over a segment of Valencia Street in San Francisco's Mission district," the announcement reads. "Anchored by stages at either end, the three-block section bounded by 18th and 21st streets will become home to more than 100 vendors and community organizations and a celebratory atmosphere. Freedom Day Fest will highlight the Latinx heritage of the Mission while acknowledging it as a queer neighborhood with a historically strong lesbian presence."

SF Pride, which did not return requests for comment, did not hold a parade up Market Street this year at the end of June due to the pandemic, and has "chosen to deliver engaging and inclusive programming all year long," its announcement reads.

"After nearly 18 months, Freedom Day Fest will be the incredibly diverse world-class festival experience people have come to expect from San Francisco Pride for more than 50 years," the announcement reads. 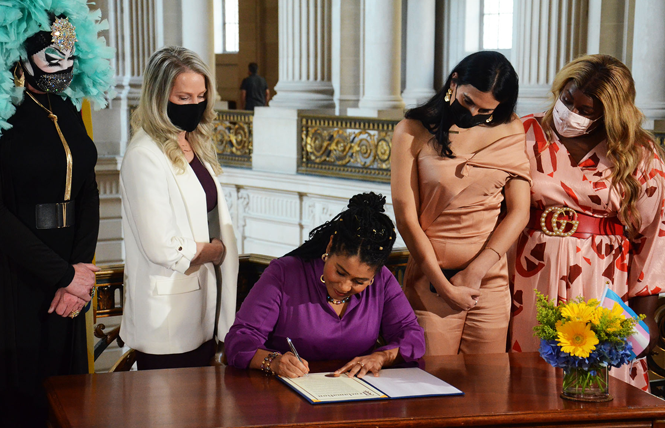 Last week, Aria Sa'id, a trans woman who is the president of the Transgender District, told the B.A.R. that district staffers, volunteers, and security — as well as food and beverage vendors — will be required to be masked at the district's Riot Party in the Tenderloin Sunday, August 29, but the general public is not so mandated to do so. There will be capacity limits, however.

Jenn Meyer, a straight ally who is the president of the board of directors of the Castro Street Fair — which will be held Sunday, October 3, between Megahood and the Freedom Day Festival — stated that "no decisions have been made."

"We are following all the health mandates closely and will make any changes necessary to keep ourselves and our guests safe," Meyer stated.

Erik Greenfrost, a genderqueer gay person who is the chair of Bears of San Francisco and the co-chair of the Bearrison Street Fair, told the B.A.R. that the inaugural festival on Harrison Street scheduled () for October 23 isn't expecting a crowd of over 10,000.

"Unlike Megahood, which is required to have masks because there will be more than 10,000 people, we are not anticipating crowds of that size at Bearrison Street Fair," Greenfrost stated. "That said, we will of course follow all guidance from the city and the Department of Public Health on how to keep our attendees safe and secure, depending on what is happening with the pandemic at the end of October. Much like Folsom Street, we are paying very close attention to the coronavirus — including the new Delta variant — and seeing what public health officials are recommending for outdoor gatherings."

Sister Desi Juana DeWitt, a member of the Sisters of Perpetual Indulgence who is a co-chair as well, stated that is "exactly what I was thinking."

"The Sisters are also still promoting the #PracticeSafeSix initiative that we partnered with the city of SF on," DeWitt stated. "We are all proactively masked for indoor events at this point."

Organizers of Oakland Pride, scheduled for Sunday, September 12, did not respond to a request for comment.