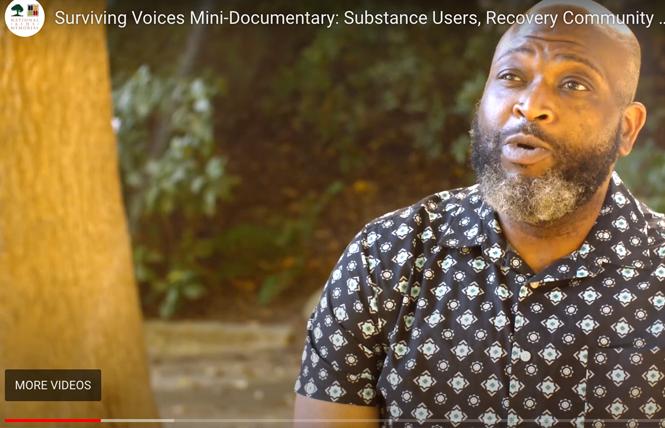 Pastor Ernest Larkins is one of the participants in "Substance Users, the Recovery Community, and AIDS." Photo: Screengrab via AIDS grove

The National AIDS Memorial Grove has released a short documentary via its Surviving Voices storytelling initiative about substance use and recovery.

"Substance Users, the Recovery Community, and AIDS" is now on the grove's website. According to a news release, the 12-minute film includes personal interview segments with survivors and advocates. The documentary previously was shown at two LGBTQ film festivals — Frameline45 and SF Queer Film Fest 2021.

"The National AIDS Memorial is honored to have our Surviving Voices mini-documentary featured at these influential film festivals," stated John Cunningham, chief executive of the grove. "It speaks to the important work our organization is doing to share these powerful personal stories of hope, resilience, and the journey of survivors around the issue of HIV/AIDS and addiction in an authentic and powerful way."

One of the people featured is pastor Ernest Larkins of City of Refuge United Church of Christ and the founder of the Messengers of Hope. Larkins talks about the first time he used drugs and how he changed. "I traded that for something else," he said in the film.

Another person featured is Billy Lemon, executive director of the Castro Country Club, a sober space in the LGBTQ neighborhood. Harm reduction is also discussed in the film, featuring Laura Thomas, director of harm reduction policy at the San Francisco AIDS Foundation, and Ro Giuliano, a harm reductionist.

SFAF is a partner on the project, including its Stonewall Project and Elizabeth Taylor 50-Plus Network, along with the Castro Country Club and Chevron.

To view the film, go to http://www.aidsmemorial.org

However, library officials said August 26 that the tape is not affiliated with Milk or his family.

Gay longtime activist Michael Petrelis made the donation. In an email to the Bay Area Reporter, he stated that he acquired the tape "via a circuitous route" and said it also shared family updates.

Milk was the first openly gay person elected to public office in San Francisco and California when he won a seat on the San Francisco Board of Supervisors in 1977. He took office in January 1978, but was assassinated 11 months later (along with then-mayor George Moscone) by disgruntled ex-supervisor Dan White.

Petrelis stated that the tape, which is not dated, joins the center's collection of other Milk items, including White's confession to investigators.

Tim Wilson of the library confirmed the donation.

"Yes, Michael Petrelis recently facilitated the donation of a cassette tape that is labeled 'Letter to Harvey,'" Wilson stated in an email. "The donor believes it may be from Harvey Milk's parents. Since there is a lack of documentation about the tape, the library is researching other avenues to authenticate it."

[Updated, 8/26/21, 8/27/21: Kate Patterson from the San Francisco Public Library emailed after this item was published to state that the tape is not from anyone affiliated with Milk. "We confirmed this with his biographer, Lillian Faderman, and a family member," Patterson stated.

In an email to the donors, Wilson wrote, "So, I'm sorry to say that this tape does not appear to be from Minerva and William Milk to Harvey Milk."

"Frankly, there is no reason to have regrets that this cassette is not from Milk's parents because we all acted in good faith," Petrelis wrote in response to Wilson's email

"I believe I speak for my friends when I say we would not want this tape to elude authentication or be added to the library's archive since the audio letter was to a different Harvey," Petrelis added.]


SF holds conviction history program info session
The city of San Francisco's Department of Human Resources will hold a virtual information session to bring awareness and guidance to job seekers interested in the city's Conviction History Program. According to a news release, the program conducts centralized pre-employment reviews of applicants' conviction history based on recency, relevance, rehabilitation, and other job-related factors to determine suitability for employment, ensuring employment decisions are free from bias and discrimination.

The online Zoom program takes place Thursday, August 26, from 1:30 to 3:30 p.m. Participants will have the opportunity to ask questions. To sign up, click here.

Updated, 8/26/21: The item on a possible Milk family tape has been updated.

Paying tribute to those lost to AIDS
Sign up!