by by Jeff Sheehy 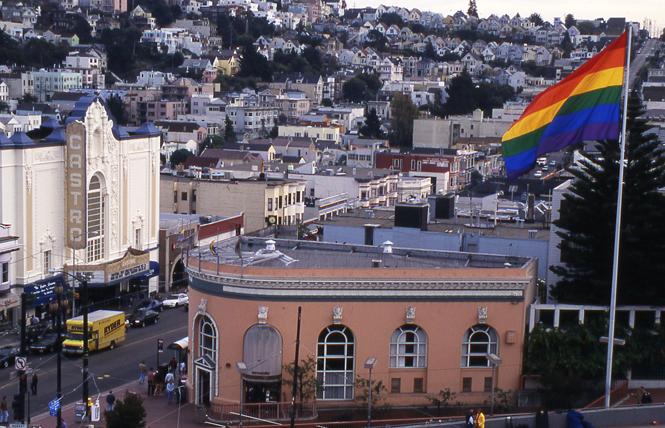 Observing the brewing controversy over the rainbow flag installation in the Castro, I may be in a unique position in that I helped Gilbert Baker in getting his work of art installed in 1997, tried to landmark it when I was supervisor, and also sponsored the legislation establishing the Castro LGBTQ Cultural District.

I know that one question underlying the controversy is fundamental and of extreme importance — the identity of the Castro as a neighborhood. The Castro must be welcoming to everyone. I applaud the Castro LGBTQ Cultural District for challenging the status quo.

I think it would be distressing to Baker, who died in 2017, to see his one permanent work of art, the rainbow flag installation, in the middle of this struggle.

Beginnings
Let me recount how the flag happened. In 1997, at the Castro Street Fair, I was standing with Baker in Jane Warner Plaza and then-mayor Willie Brown was approaching with his entourage. Baker was keenly aware that the mayor was promoting public art. Stanlee Gatti had proposed a giant foot sculpture for the foot of Market Street and a giant peace sign sculpture in the Panhandle at Golden Gate Park. Baker and I approached the mayor and Baker, with all of his glorious and passionate energy, pitched the idea for his work of art, the installation of a giant flagpole flying the rainbow flag — an idea he had spent 10 years developing. I stood by Baker as he described his vision in detail, from the placement of the pole, to the height of the pole and the size of the flag. Baker had already worked out all of the details.

Brown turned to one of his aides and directed him to make it happen. The aide worked with Baker and the appropriate city agencies, hewing precisely to Baker's vision. And I was there when Brown honored Baker at that historic moment when Baker first raised that flag to honor the 20th anniversary of Harvey Milk's election to the Board of Supervisors, a seat I would go on to hold.

One problem may be a failure to recognize Baker as an artist and the rainbow flag installation as a work of art. It is not just a flagpole. Read Baker's own words in a letter to the Bay Area Reporter in its September 15, 2011 issue:

"The rainbow flag that flies so proudly over Harvey Milk Plaza was my creation. It took me 10 years of work to get it there and was dedicated on November 7, 1997 to commemorate the election of Harvey Milk to the San Francisco Board of Supervisors. I share credit for this accomplishment with then-Mayor Willie Brown and Jeff Sheehy, then-president of the Harvey Milk LGBT Democratic Club.

Baker's body of work
It's important to consider Baker's body of work as an artist. We know much about of Baker's work as a vexillographer, spearheading the creation of the Rainbow Flag, creating massive, spectacular environmental works of art like the mile-long flag displayed at Pride in New York City in 1994 and the 1.25 mile coast to coast Rainbow Flag at Key West Pride in 2003. We can see his influence in the proliferation of flags representing the constellation of communities in our liberation movement. Flags derive from banners designed to lead armies into battle where we kill each other. Baker's influence spread the notion that flags can represent communities of love and affirm our identities, our individuality, and our freedom.

But there is more to Baker's art.

Arguably his first piece was performance art at boot camp in Missouri after being drafted during the Vietnam War. Baker refused to carry a gun. I quote from his autobiography, "Rainbow Warrior":

"I noticed the drill sergeant fix on me. 'You don't have a weapon Baker'...

"'I will not carry a weapon. You can do what you want, but I'm not going to carry a gun. I have rights.'

"'You haven't got shit for rights!' the captain screamed. ... The colonel drove up, 'You're a coward' ... the officer of the day ... 'We could kill you on the spot. We have every right to shoot you as a deserter. Nobody would think twice about a dead queer.'"

Baker never carried a gun; they made him a medic. After all, they needed every warm body they could get their hands on.

Another work of political performance art was an action Baker organized to protest Pope John Paul II's visit to San Francisco. He led a group in drag to the Golden Gate Bridge where they crashed a car into a tollbooth as the pope's helicopter was arriving. Of course they were immediately arrested. When the police put handcuffs on Baker, he wrote that he spread his arms wide and attached to his wrists "were the corners of the U.S. Constitution in satin parchment that opened across my bosom ... the media picked up the moment. It was better than giving John Paul II the finger."

One of my favorites was "Pink Jesus — Martyrs For Art." In 1990, Baker crashed the Freedom Day Parade, inserting himself at the head of the parade just behind Dykes on Bikes. Covered in pink body paint, with a crown of thorns, an American flag loincloth, and in high heels, he was carrying a cross. Not well received, parade security personnel demanded police arrest Baker. Of course, Baker replied, "for what, a fashion violation?" The crowd loved it and the police were not about to load "Pink Jesus" into a paddy wagon. Parade organizers, horrified, marched 100 yards behind him for the rest of the parade.

One of his last works shortly before he died was the creation of concentration camp uniforms with pink triangles foreshadowing then-President Donald Trump and our country's march toward an actual fascist regime. He presented these in a gallery in the Castro and Patrick Carney included them in the Pink Triangle installation during Pride in 2017.

A critical point about Baker is that he never made money on the rainbow flag. With the help of a young lawyer named Matt Coles he actually prevented Paul Hardman and the Pride Foundation from trademarking the flag. When Coles asked Baker about patenting it himself, he said that the flag belongs to everyone.

His devotion to his art came at a great personal cost to him. Initially, as one of the city's leading vexillographers, then-mayor Dianne Feinstein's administration hired him to festoon City Hall with flags for visiting foreign dignitaries. He even received the commission to decorate the Moscone Center with flags for the 1984 Democratic National Convention. However, after protesting the pope, he never received another commission from Feinstein's administration. And in 2000 when he was invited by World Pride to mount a display of his flags and related art in Rome, his planned exhibition was targeted by the Vatican. Galleries were pressured to refuse it and the only venue to accept it was on a barge in the Tiber River. The art was shipped, but then impounded at customs. Funds were raised to liberate the art. The exhibition went forward but authorities shut it down after three days.

Baker's devotion to both his activism and art was paramount. In the long run, the art world saw fit to honor him, and his flags have been shown in museums around the world. They are also in the permanent collections of the Museum of Modern Art in New York City, the London Design Museum, the Tang Museum, the Barack Obama Presidential Library, and the Kansas History Museum.

Two issues
I see two issues. One is whether to preserve the singular, permanent work of art by an extraordinary, talented queer artist, and who did not profit off the rainbow flag. The other is the reason I sponsored the formation of the Castro LGBTQ Cultural District. I hoped that it would preserve our community with its values of love, liberation, diversity, and acceptance and lead our community in the spirit of inclusivity it so desperately needs. I reiterate, I am proud of the cultural district for starting a dialogue around the Castro's identity, values, and history. (The cultural district's board passed a nonbinding resolution in June calling for the replacement of the Baker flag in the Castro.) And I hope the district can recognize Baker's unique talent and incredibly provocative body of work and preserve his work of art as he intended.

[Editor's note: As the Bay Area Reporter has reported, Gilbert Baker co-created the first rainbow flags in 1978 with Lynn Segerblom and the late James McNamara.]

Jeff Sheehy is a gay man and former District 8 representative on the San Francisco Board of Supervisors.