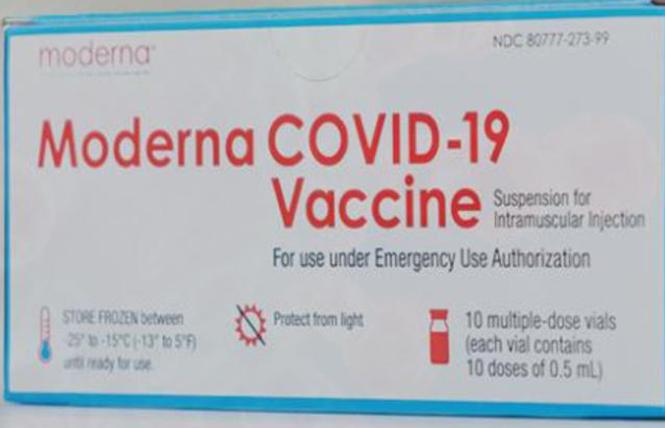 National health agencies are recommending COVID booster shots, such as Moderna, for some people with HIV. Photo: Courtesy Moderna

The U.S. Food and Drug Administration on August 12 updated its emergency use authorization for the Pfizer-BioNTech and Moderna COVID-19 vaccines to allow for an additional dose for moderately to severely immunocompromised people, including people with advanced or untreated HIV. The federal Centers for Disease Control and Prevention endorsed the booster and specified which groups are eligible August 13.

San Francisco began offering the booster August 18, according to a news release from the Department of Public Health.

This federal recommendation for people living with HIV "is an important step in ensuring everyone, including those most vulnerable to COVID-19, can get as much protection as possible from COVID-19 vaccination," CDC director Dr. Rochelle Walensky said in a statement.

In addition to people living with HIV, the recommendation also includes people receiving cancer treatment, organ or stem cell transplant recipients, and people taking medications that suppress immune function. Small studies have shown that some transplant recipients and cancer patients who did not respond well to the initial vaccine series had a stronger antibody response after a third dose.

Acting FDA commissioner Dr. Janet Woodcock stressed that people who are not immunocompromised do not need an additional shot at this time. However, the Biden administration is expected to announce that most Americans will need a booster to provide more protection against the highly transmissible coronavirus Delta variant, the Washington Post and other outlets reported this week. These additional doses would be given eight months after the previous shot, starting with health care workers and older people.

Due to a lack of data, the FDA authorization and CDC recommendation do not include immunocompromised people who received the single-shot Johnson & Johnson vaccine — an unfortunate omission, some believe, since this vaccine appears to provide less protection. Earlier this month, Zuckerberg San Francisco General Hospital and the San Francisco Department of Public Health began offering a supplemental Pfizer-BioNTech or Moderna dose to people who received the J&J vaccine, although they do not officially recommend it.

HIV and COVID risk
Studies continue to yield conflicting evidence about whether people with HIV are more likely to develop severe COVID. A large World Health Organization study presented at the recent International AIDS Society Conference on HIV Science, which mainly included people from South Africa, found that those with HIV had a 13% higher risk of severe COVID and a 30% higher likelihood of dying in the hospital.

But a second study of more than 21,500 patients hospitalized with COVID in the United States, including 220 who were living with HIV, did not see a difference in the risk of severe illness, ICU admission, length of hospital stay, or mortality between HIV-positive and HIV-negative people.

Both studies were limited by a lack of information about HIV treatment or CD4 T-cell levels, but a third analysis found that a lower CD4 count and detectable viral load were associated with more severe COVID. The CDC's new vaccine recommendation targets this group.

Small studies have found that a majority of HIV-positive people develop immunity after natural infection with the coronavirus and respond well to COVID vaccines, but this may not be the case for those with more advanced HIV.

"People living with HIV are not a homogeneous group," Dr. Monica Gandhi, director of the Ward 86 HIV clinic at SFGH, told the Bay Area Reporter. "Many people living with HIV are doing very well on their antiretroviral therapy with high CD4 counts and suppressed viral loads. In general, we tend to boost vaccines when the CD4 count is below 200 as this indicates a more immunocompromised state."

But some advocates think the booster indication should be broader and include all people living with HIV, arguing that restricting eligibility to people with advanced or untreated HIV is unnecessary and will lead to logistical problems at vaccinations sites.

"Today's decision will just cause more confusion for people with HIV," Lynda Dee, executive director of AIDS Action Baltimore, told the B.A.R. "It's ridiculous to try to codify 'advanced HIV.' All people with HIV should have been included. That would have been clear and uncomplicated. People with HIV and their doctors should be able to decide together if a third vaccine dose is indicated."

But that can happen under the current recommendation, Dr. Demetre Daskalakis, a gay man who is director of the CDC's Division of HIV/AIDS Prevention, told the B.A.R.

"The data we currently have really point toward folks who are more immunocompromised requiring an additional dose, as a safety net," he said. "But the bottom line is that there's a very clear statement that folks should talk to their health care providers. People can have different levels of being immunocompromised, and that's something that can be discussed between a person in care and their physician. Meanwhile, for individuals out of care who are untreated, it should be a no brainer."

Updated, 8/18/21: This article has been updated with comments from the CDC's Division of HIV/AIDS Prevention and to include that San Francisco is offering the booster.

Fauci on film: documentary spans the virologist's work on two pandemics
Sign up!