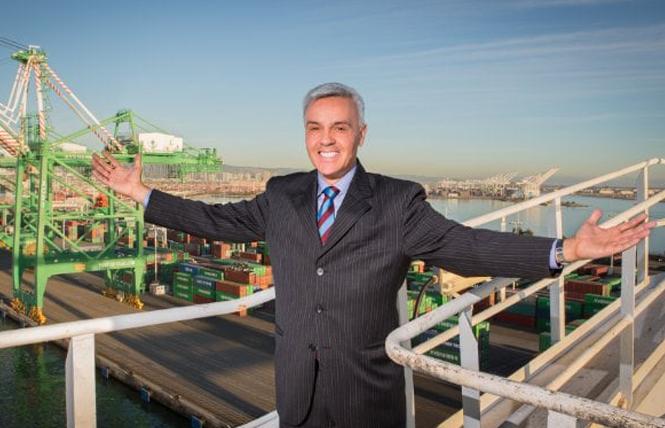 Gay Oakland Port Commissioner Michael Colbruno recently won unanimous approval to serve a third four-year term on the East Bay maritime body. He is one of at least three out port commissioners now overseeing one of the 11 publicly-owned ports scattered throughout the state.

Reappointed by Oakland Mayor Libby Schaaf to a term ending July 1, 2025, Colbruno received unanimous support from the Oakland City Council when it approved his third term as part of its consent calendar at its July 20 meeting. A partner in the government affairs firm the Milo Group, Colbruno had previously served on the city's planning commission.

"I feel like the mini Pete Buttigieg doing transportation and logistics," Colbruno joked in a phone interview with the Bay Area Reporter, referring to the country's gay transportation secretary. "No, but seriously, it is exciting. I am hoping to wrap up stuff important to me."

Two items he's focused on in particular are electric vehicle infrastructure and greening the port. Both issues have taken on greater importance as the climate changes for the worse and the infrastructure bill making its way through Congress has funding for both.

"Great strides are being made with the Biden administration coming in to do that work," noted Colbruno. "I am particularly reenergized."

One controversial issue that will likely come before Colbruno and his fellow port commissioners is the Oakland A's baseball stadium project proposed for the Howard Terminal at the port. Negotiations between the team and Oakland officials hit a rough patch over the terms of the mixed-use development that includes the new athletic facility, housing, and public parkland, with the owners threatening to possibly move to Las Vegas.

After the Oakland City Council adopted a new term sheet for the project, the team and Schaaf's administration are back at the negotiating table. While it is still unclear if the A's will stay in the Bay Area, Colbruno expressed optimism about the two sides reaching a deal.

"I am encouraged. Rebecca Kaplan did a great job of getting the term sheet to the council, which I think saved the A's," said Colbruno, referring to its lesbian at-large councilwoman and vice mayor. "The mayor and her staff are involved in serious negotiations, and I heard it prompted the A's to cancel their last trip back to Las Vegas. So it went from really promising to bleak to really promising again."

The port commissioners would need to sign off on any development proposal from the team and are waiting to be presented with an environmental impact report on the project. Operators at the port and unions representing maritime workers have expressed opposition to seeing the A's locate a stadium there.

"Their job is to protect port land, so them being in opposition to this is no surprise. One thing I am looking at very seriously as I make up my mind is this will be the most housing now being built on the east side of the bay for people of color," said Colbruno. "So this is not about gentrification. I think this is an opportunity for communities of color to have waterfront property. I don't know anywhere else in North America where that opportunity exists right now."

The port, which also includes the Oakland International Airport, has seen its operations upended by the COVID-19 pandemic. Countless flights were canceled and shipments were waylaid due to the health crisis.

Airlines and shipping companies are still navigating turbulent waters due to the now surging Delta variant of the coronavirus. But passenger counts have been rising this summer with airlines adding new routes out of Oakland, and the port now has the tallest cranes of any such facility in North America.

"This crane is as tall as the World Trade Center. They are massive," marveled Colbruno. "I love it. You have all these infrastructure queens making decisions about trade and logistics. It is one of the most rewarding things in my life to do." 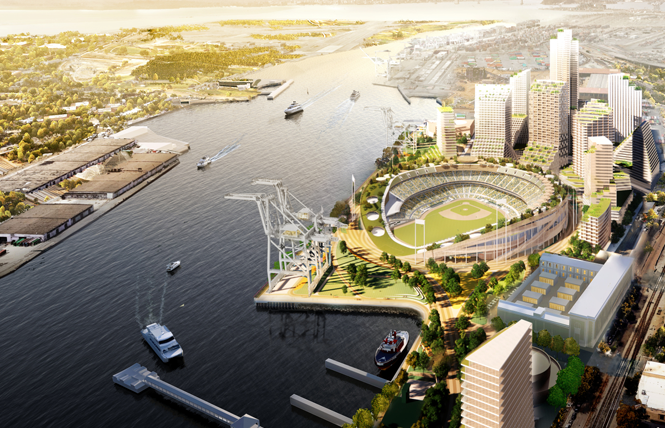 It does not appear there are any LGBTQ people currently serving on the two cities' port commissions. Elaine Forbes, an out lesbian, has served as executive director of the Port of San Francisco since 2016.

Danny W. Wan, a gay man who has worked for the Port of Oakland off and on since the 1990s, became its executive director nearly two years ago. Another longtime gay employee, Robert Bernardo, became the Oakland port's director of communications July 26.

In January, the Port of San Diego welcomed two out women to its Board of Port Commissioners. Among its seven members are lesbian San Diego resident Jennifer LeSar, the wife of lesbian state Senate President pro Tempore Toni Atkins (D-San Diego), and bisexual National City resident Sandy Naranjo, who has two children with her husband.

In an emailed response to the B.A.R., Naranjo noted she is the first openly LGBTQIA Latina Port Commissioner from her city and that the oversight body held a Pride panel at the Port of San Diego. Other than Colbruno and LeSar, Naranjo told the B.A.R. she was unaware of any other out LGBTQIA port commissioners in the state.

"But at least Commissioner Michael won't be alone. Even if it is just the three of us," wrote Naranjo, adding that she is interested in attending an upcoming affinity group meeting for out port professionals and leaders.

Because of the COVID pandemic, the LGBTQ affinity group had gone on hiatus, said Colbruno.

"We were visiting ports," he said. "I am sure it will pick up again."

LGBTQs rally for Newsom
A number of the state's LGBTQ officials and Democratic political clubs are rallying behind Governor Gavin Newsom as he fends off the recall election targeting him. They are hosting an "LGBTQ+ Day of Action!" Thursday, August 19, to encourage LGBTQ voters throughout the Golden State to vote no in the September 14 recall election.

Registered voters last week began receiving their ballots in the mail, which they have until the day of the special election to postmark, or they can head to a polling place that Tuesday to vote. The ballot consists of two questions, the first being should voters recall Newsom, a Democrat now in his third year of his first four-year term.

The second question asks voters who should replace Newsom if he is recalled and lists the names of more than 40 people with various political party affiliations who qualified to run to succeed him (Newsom is ineligible to run). Voters can either choose one of the aspirants, or leave that question blank, as Newsom has encouraged people to do.

Some of the replacement candidates who have received the bulk of the mainstream media's attention are Republicans including former San Diego mayor Kevin Faulconer; transgender former Olympian Caitlyn Jenner; businessman John Cox, who lost to Newsom in 2018; and conservative radio host Larry Elder. Democrats Jacqueline McGowan, a cannabis policy adviser, and YouTuber Kevin Paffrath are also on the ballot.

Equality California Executive Director Rick Chavez Zbur, a gay man running for a Los Angeles state Assembly seat next year; San Francisco Democratic Party Chair Honey Mahogany, the first transgender individual to lead one of the state party's local chapters; and gay Insurance Commissioner Ricardo Lara, the first out person elected to statewide office in California who is seeking reelection in 2022, are among those set to take part in the virtual rally, which begins at 5:30 p.m. Thursday.

Noting his job focus includes helping to "prevent disaster," Lara said he is voting no on the recall and encouraged his supporters to do likewise in an email he sent out this week.

"If far-right Republican forces take control of the governor's office, it would be a catastrophe for every working Californian," wrote Lara, a former state legislator. "We can't let disaster happen here. That's why I'm asking you to join me in supporting our fearless Governor and vote NO on the Republican recall by September 14th."

Participants of the online event will be asked to phone bank voters from 6 to 8 p.m. To RSVP visit click here.

Web Extra: For more queer political news, be sure to check http://www.ebar.com Monday mornings for Political Notes, the notebook's online companion. This week's column reported on the U.S. Census Bureau including LGBTQ data for the first time in one of its surveys.