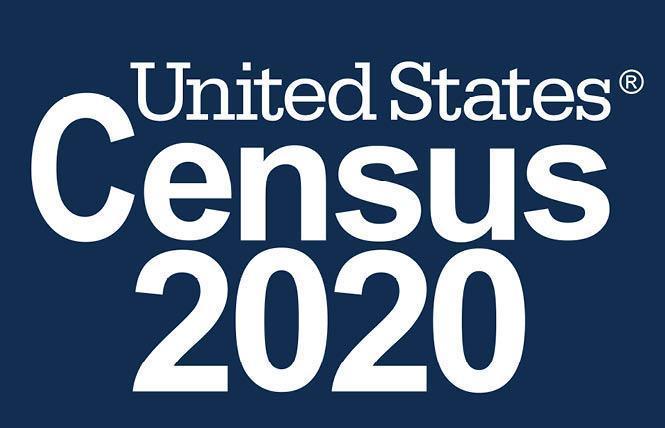 In a historic first for the U.S. Census Bureau, the federal agency reported out data about how LGBTQ households have been impacted by the COVID-19 pandemic in its August 11 Household Pulse Survey. The information confirmed what LGBTQ organizations had already discerned in their own surveys, that the LGBTQ+ community is disproportionately impacted by economic inequality.

Since the beginning of the health crisis there has been no accurate data on the number of cases of COVID or hospitalizations and deaths from the coronavirus within the LGBTQ community due to myriad issues with the collection of sexual orientation and gender identity demographics, as the Bay Area Reporter has extensively covered. Researchers have tried to extrapolate what they can from the limited SOGI data that is available, while various agencies focused on the LGBTQ community have conducted their own studies into COVID's impacts.

Census officials had disclosed on August 5 that the newest phase of their Household Pulse Survey had been updated in July to now ask respondents their sexual orientation and gender identity in addition to their sex. It is part of the census bureau's experimental data collection effort to measure the impact of the COVID-19 pandemic on American households.

The new version of the questionnaire, anticipated to continue through October 11, which is National Coming Out Day, marks the first time a census bureau-sponsored survey includes questions about sexual orientation and gender identity. LGBTQ advocates hailed the development.

"The Williams Institute is honored to have worked with the census bureau since the early days of the Biden administration on adding questions of sexual orientation and gender identity to the Household Pulse Survey. With this data, the U.S. government will be able to adequately respond to the needs of LGBT people struggling from the effects of the COVID pandemic," noted the LGBTQ think tank based at UCLA School of Law.

Like the Williams Institute, which has been reporting about the impacts of COVID on the LGBTQ community from the start of the pandemic last year, the Human Rights Campaign also undertook its own research into how the health crisis has upended the lives of LGBTQ people. The national LGBTQ rights group created a special page on its website to collate the various data.

"The census bureau's new data only continues to highlight what we have long known — LGBTQ+ Americans disproportionately bear the brunt of economic hardships from food insecurity to unemployment," stated Jay Brown, HRC's senior vice president of programs, research and training. "This disparity is further fueled by the COVID-19 pandemic, as the LGBTQ+ community is more likely to work in front-line service jobs, have their hours cut, and face housing and employment discrimination."

It is based on data collected between July 21 and August 2. The census bureau sent invitations to 1,042,642 households and received a total of 64,562 responses, for a weighted response rate of 6.1%. New data will be reported out from additional household surveys every two weeks.

As explained in a report from sociologist Thom File and survey statistician Joey Marshall, both with the census bureau's Social, Economic, and Housing Statistics Division, the phase 3.2 version of the Household Pulse Survey reworded one question and added two new ones.

The first asks, "What sex were you assigned at birth on your original birth certificate?" The answer choices are male or female.

The following question then asks about current gender self-identification by inquiring if the person currently describes themself as male, female, or transgender? The answer choices are male, female, transgender, or none of these.

The survey also now asks about sexual orientation with the question, "Which of the following best represents how you think of yourself?" The answer choices are gay or lesbian; straight, that is not gay or lesbian; bisexual; something else; or I don't know.

"Survey respondents are categorized as LGBT if they report a sex at birth that does not align with their current gender identity; report a sexual orientation of gay, lesbian or bisexual; or if they currently identify as transgender," wrote File and Marshall. "Respondents whose sex at birth aligns with their current gender identity and who select Straight on the sexual orientation question are categorized as 'non-LGBT.'"

It is the second time this summer a federal agency has taken steps to gain better insight into the issues impacting the LGBTQ community. As the B.A.R. reported in early July the federal Office of the National Coordinator for Health IT, which certifies the use of electronic medical records, is now requiring the creators of the computerized systems to ensure patients' SOGI data can be easily shared among health care providers, governmental agencies, and researchers.

It is a first step toward creating a systemized way to securely capture and exchange the SOGI data among various entities. By laying the groundwork for health IT professionals to build systems that allow for the exchange of the SOGI data as the information becomes applicable to an individual's care, the Biden administration is signaling that it supports seeing the SOGI data become a required category that is collected.

California officials took steps last year to address the lack of SOGI data but then ran into problems with the health record systems being used around the state. They either had not been updated to ask the SOGI questions or were unable to share the data with state health officials because of problems with what are known as the Health Level Seven International (HL7) standards. The HL7 standards omit sexual orientation data and use outdated terms for gender identity.