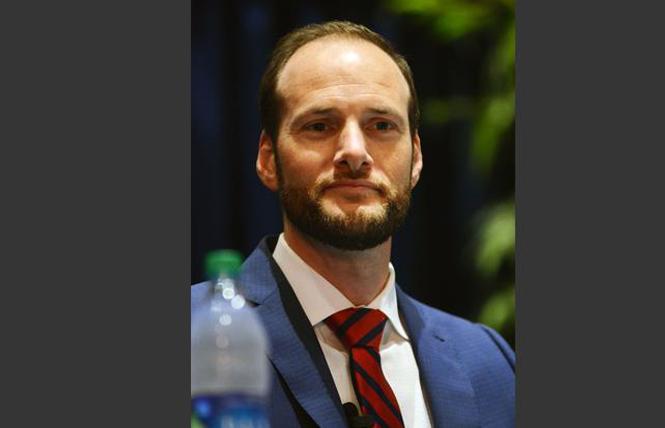 One of two efforts to recall San Francisco District Attorney Chesa Boudin came up short August 11, according to the business adviser and Republican former mayoral candidate who spearheaded the effort.

The deadline for the signature gathering phase in Richie Greenberg's effort — which as the Bay Area Reporter previously reported began after a parolee was allegedly responsible for a hit-and-run that killed two pedestrians in the South of Market neighborhood on New Year's Eve — was Wednesday.

"Unfortunately, we came up short by 1,714 signatures," stated Greenberg. "Our deadline was today 8/11, but it became clear that after removing the invalid and fake signatures/petitions submitted to our office, we had a total of 49,611. We needed 51,325."

After the initial publication of this article, Boudin stated to the B.A.R. that "I'm focused on doing the job I was elected to do and neither of the Republican recalls will distract me from working for a safer and more just San Francisco."

Stand with Chesa Boudin sent a more detailed statement to the media generally.

"Richie Greenberg had hundreds of thousands of dollars from wealthy donors, sustained media coverage, and 160 days and he couldn't approach the number of signatures he needed to even get the Department of Elections to count them," stated Julie Edwards, a spokeswoman for Stand with Chesa Boudin. "Voters in San Francisco and California will reject radical recalls because they do not represent our values."

Stand with Chesa Boudin also stated that "There will be no independent process to determine the final number of valid signatures but they clearly fell far short."

Greenberg's effort began in the form of an online petition calling for Boudin's resignation. Once that garnered almost 15,000 signatures, he decided to turn it into a recall petition.

There is another recall effort collecting signatures right now against the top prosecutor, however. That's being led by former San Francisco Democratic Party County Central Committee chair Mary Jung, and has a signature deadline of October 25.

Jung's group has received far more donations than Greenberg's did — $715,000 compared to $277,000, according to the San Francisco Chronicle. It also claimed to have collected about the same amount of signatures, thus far.

Greenberg had been bullish right up until the end, stating just nine days ago that "Chesa Boudin realizes the walls are closing in around him and he's showing further desperation."

Greenberg was no less forceful Wednesday.

"We need to be clear: Falling short of the mark had no connection to any effort by the supporters of Chesa Boudin," Greenberg stated. "The Stand with Chesa group had no influence. They made no converts of voters moving to their side, yet they did certainly try to fund-raise off fear-mongering. Monitoring their email newsletters, the amount of falsehoods, irrelevancies and concoctions were astounding. We should never allow them to celebrate any perceived victory in our not succeeding today."

Updated, 8/12/21: This article has been updated with comments from DA Boudin.