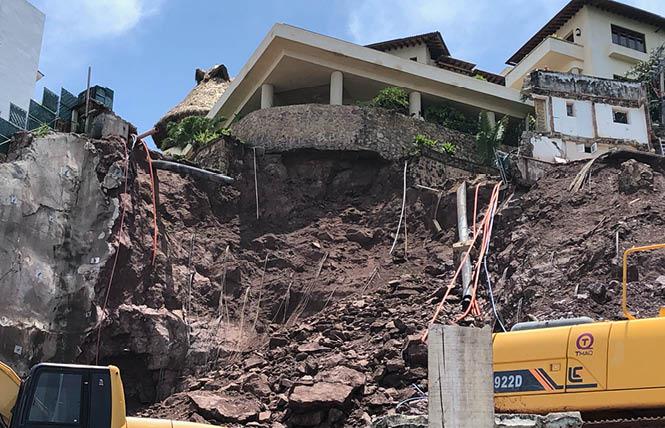 A cliff at a construction site near a gay beach in Puerto Vallarta collapsed. Photo: David D.

A cliff at a building excavation site next to the gay beach in Puerto Vallarta, Mexico collapsed Tuesday, August 10. No one was hurt but dramatic videos posted online of the collapse and landslide are focusing attention on the safety of construction in the area as demand for beachfront condos spikes.

Sylvia Toy, President of the Amapas Neighborhood Association, told the Bay Area Reporter August 11, "Puerto Vallarta is an attractive tourist location. Many come here for its idyllic community. Yesterday's landslide exposed a terrible dark side of what exists beneath the huge growth in condominium sales."

ANA represents the neighbors and businesses in the Colonia Amapas section of Puerto Vallarta, which includes the gay beach. ANA is a nonprofit 20-plus-year-old organization founded by members of the community dedicated to improving quality of life in the Amapas area.

Don Pickens, an Amapas council member and owner of the upscale gay boutique hotel Casa Cupula, told the B. A. R., "Since moving to Puerto Vallarta from San Francisco, I have worked with ANA to try to keep development in our neighborhood (the main gay tourist area) reasonable, but the city constantly grants permits for overbuilding. U.S. buyers don't help as they are snatching up everything built today regardless of its density or approval status, without understanding they don't have the same rights as they do at home.

The collapse site is in front of the Seahorse sculpture, which is just south of the Blue Chairs Beach, the gay-popular section of Los Muertos Beach. According to local press reports, authorities were first alerted after a sinkhole appeared near the construction site on Calle Santa Barbara. Part of that street was lost in the landslide and at least two neighboring buildings were evacuated out of concern that more of the hillside would give way.

The site was designed as a luxury condominium complex called Serena. The development's website shows that most of its units were already pre-sold. Construction on the site was ordered to stop in November 2020 because it lacked environmental impact and other permits, but construction work with heavy machinery continued at the site, according to local media. It was not clear whether the development had been given permission to continue with at least some of the construction.

In response to an email from the B.A.R. to the Serena website, Marcel Vobejda responded on Wednesday, "The developer is meeting with the authorities and has hired experts in the matter that have arrived today to Vallarta. He has been in meetings all day, so we should have some official notice by tomorrow."

In a post of the Serena Facebook page in January, co-owner and developer Roberto Contreras wrote that the project would be built despite the ordered temporary shutdown.

"Please rest assured the project is not a fraud as many here are falsely claiming," the developer wrote.

Updated, 8/11/21: Some inaccurate reports in the Mexican media referred to a "building collapse." In fact, the building was in the excavation phase when the landslide happened. The headline and lead sentence have been corrected.