by Tiffany Woods and Lester Aponte 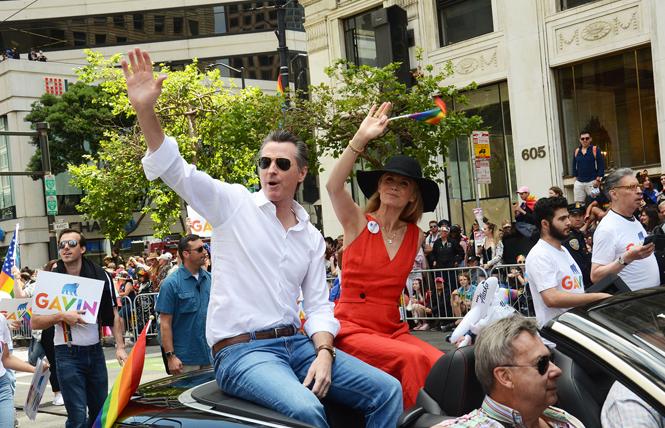 Governor Gavin Newsom has been a champion of LGBTQ+ equality for decades. Full Stop! Ever since risking his political career for marriage equality as mayor of San Francisco, Newsom has been with us. It is now our turn to have his back. In fact, it is imperative that we do so, or risk losing decades of hard-fought — and won — LGBTQ+ protections ensuring California has some of the strongest pro-LGBTQ+ laws in the nation. This is all at risk if a Republican governor, let alone a right-wing Trump Republican, succeeds in replacing Newsom in the September 14 recall. You must vote and vote no on the recall.

Concern is growing that apathy among Democratic voters may lead to a catastrophic result in the recall election. While Democrats hold a 2-1 advantage in registered voters and a clear majority of Californians oppose the recall, polls are showing a close race among likely voters. That is because Republican voters, particularly the anti-mask, anti-vaccine, anti-science, and anti-equality ones, are enthused about the opportunity to take over America's richest, most populous state. Democrats, on the other hand, are reacting to the election with a big collective yawn. Wake up, Democrats! There is a lot at stake in this election. California can continue to be a leader on inclusion, climate, and worker protections. Or it can sink into regressive politics.

Let us be very clear: this recall is a right-wing, Republican power grab exploiting the devastating tragedies of the COVID-19 pandemic and California wildfires, and an assault on our core democratic values. Republican policies have always been harmful to California's diverse and intersectional LGBTQ+ and BIPOC communities. We remember the devastation of 2009, when then-Governor Arnold Schwarzenegger enacted cuts that set decades of HIV funding advocacy back 20 years, levels that still have not recovered to this day. A Trump Republican would be catastrophic. We could also lose the majority in the U.S. Senate if a seat opens and a Republican governor gets to make an appointment, jeopardizing President Joe Biden's agenda. This is not just about California.

For the LGBTQ community, in particular, this recall is a clear and present danger. As governor, Newsom has signed into law numerous pieces of legislation strengthening protections for LGBTQ+ Californians, including:

- Ensuring HIV-positive seniors are included in the definition of "greatest social need."

- Collection/reporting of sexual orientation/gender identity data to track the effects of COVID-19 on the community.

- Establishing the Transgender and Wellness Equity Fund, the first in the nation, creating TGI-specific housing programs, providing TGI-focused health care, and funded with $13 million in the 2021 budget.

- Allowing the California Department of Corrections and Rehabilitation to house transgender, gender-nonconforming, intersex (TGI) individuals in a manner matching their gender identity, supporting health and safety.

- Dignity for deceased nonbinary Californians to be identified as such on their death certificates.

There are many important bills making their way through the legislative process right now that would never become law if Newsom is removed. That includes gay state Senator Scott Wiener's (D-San Francisco) bill to repeal a law commonly known as "walking while trans," which has led to decades of discrimination against the transgender community, particularly Black and Brown trans women.

It does not take imagination to know what a Republican governor would do about legislation and state action protecting the LGBTQ community or promoting our welfare. Anti-LGBTQ rhetoric is an important part of the Republican repertoire. And anti-trans hysteria is central to their base. We have made much progress in California since the late San Francisco supervisor Harvey Milk first urged us to come out and fight. It is no exaggeration that any more forward progress would come to a screeching halt if Republicans are able to recall our governor and install one of their own. Ballots will arrive in mailboxes starting August 16.

The choice is ours. Vote No on the recall, protect our equality! Urge your friends and neighbors to do the same. Now is the time to have those tough conversations. But that is not enough. We need volunteers to write, call, and text voters and spread the word. We need LGBTQ+ clubs organizing anti-recall events, and Pride organizers mobilizing their events to fight this recall. We can keep marching toward equality or be stopped in our progress and shoved backwards. Go to our Stop the Recall page on the California Democratic Party's LGBTQ Caucus website for volunteer opportunities.