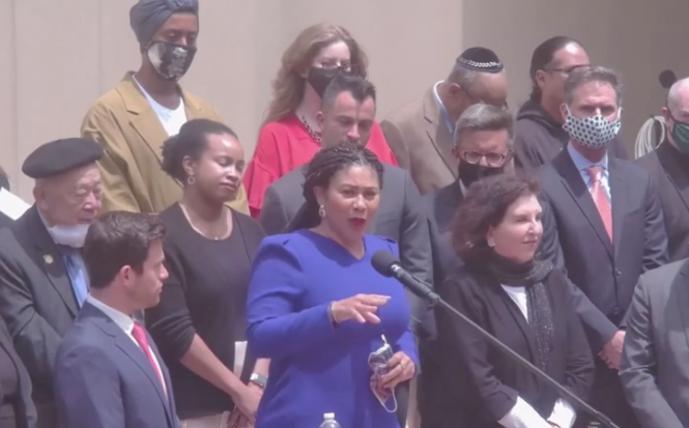 Elected officials joined Jewish community leaders at a news conference in San Francisco July 29 to denounce a resurgence of anti-Semitism in the Bay Area and the nation at-large.

Rabbi Beth Singer of the Congregation Emanu-El in the Richmond neighborhood said that the event, titled "Here I Am: Convening Against Anti-Semitism and Hate," is a response to things she and fellow Jewish leaders have been hearing from their congregations since the heating up of the long-standing Israeli-Palestinian crisis in the spring.

The most recent conflict occurred in mid-May when Israeli police raided a mosque in Jerusalem, according to the New York Times. Tensions flared from there between Israel and Hamas, the group that rules the Gaza Strip. A cease-fire was declared later that month.

"Throughout our Jewish tradition, we've come together to say Hineni — here I am," Singer said. "We know acts of anti-Semitism are as old as the Bible, but when our students reach out to us in fear ... we have a problem.

Singer said that a college student reached out to her to say that there was a lot of anti-Semitism on her college campus. The campus was unnamed.

"All of our rabbis were having students reach out, from high school kids to college students," Singer explained. "Every one of them is an advocate of lasting peace between Israelis and Palestinians. Our kids need all of us to come together to say 'here I am.'"

Rabbi Jonathan Singer, the husband of Beth, said that many Jewish people were shaken by images of the January 6 insurrection in Washington, D.C.: "people wearing T-shirts celebrating Auschwitz as they attacked the Capitol — the very foundation of our democracy."

"We thought it was a thing of the past," he said.

The Bay Area has not been immune from recent high-profile crimes against Jewish people. Last month, Manny's, a cafe owned by gay, Jewish businessman Manny Yekutiel in the Mission district — was graffitied with the epithet "Zionist pigs" and "Free Palestine," as Mission Local reported. (Manny's has long been a target of protests, as J Weekly has reported.)

Yekutiel did not immediately respond to a request for comment.

The Palestinian American Coalition in San Francisco did not immediately respond to a request for comment.

A few weeks earlier, a Jewish preschool in Noe Valley was vandalized with "Death to Israil" [sic], as the Jewish News of Northern California reported.

Earlier this month, a Los Gatos man was arrested with a stash of weapons and an anti-Semitic manifesto in his vehicle, KRON-TV reported.

These incidents, among others in recent years such as the 2018 Pittsburgh synagogue shooting that left 11 dead, are among those leaving Bay Area Jews concerned.

"I hate that we need a metal detector to enter Temple Emanu-El," said gay state Senator Scott Wiener (D-San Francisco), who is Jewish. "It breaks my heart every time I enter a congregation, but that's the world we are living in."

Most hate crimes based on religion are anti-Semitic
California Attorney General Rob Bonta spoke at the event.

"Let me say this — so it's loud and so it's clear coming from the California attorney general — there is no place for anti-Semitism in California anywhere or at any time," Bonta said. "Period. No stop. End of story."

After hate crimes targeting Black people, Latinos/Hispanics, and gay males, the data showed that Jews were the most targeted group.

Bonta, who is Filipino American, said that he can relate to feeling afraid for the safety of family members.

"I'm saddened that the Jewish American community does not feel safe and does not feel secure," Bonta said. "I will do my part to change that. It's personal to me."

Bonta, who said he is nearing 100 days in office, touted his establishment of the racial justice bureau at the state's justice department as a step in the right direction.

"We're making sure we have the resources, support and guidance for addressing hate in our communities," he added.

San Francisco Mayor London Breed thanked the attendees for standing up to say "Here I am.'"

Breed thanked Congregation Emanu-El, which is over 160 years old, for its role in the city's community.

"I think about the challenges that existed before we were even alive," Breed said. "We had the 1906 earthquake ... and this place helped people recover just as how Congregation Emanu-El is helping people through the current pandemic."

'There I was,' Wiener says
Nodding to the reality that the COVID-19 pandemic is surging in the Bay Area thanks to the Delta variant, many attendees were wearing masks, including Wiener.

"We were baby attorneys together," Wiener remarked, referring to when both once worked in the San Francisco City Attorney's office.

Wiener said that while more crude versions of anti-Semitism are less prevalent in the Bay Area than in other places, it is sometimes wrapped up with people's political beliefs and other attitudes toward Judaism and Jewish people.

"I'm going to do a play on 'here I am' and I'm going to say 'there I was,'" Wiener began. "There I was in the 1980s, as a young, Jewish gay man in southern New Jersey. ... Let me tell you about it. There was enormous anti-Semitism. When I was in the sixth grade, the social studies textbook had a chapter about how the Jews thanked the Romans. I got called a kike more times than you can recall. I was told I was going to hell. That's how it was."

Wiener was initially relieved to be moving to the Bay Area.

"When I moved to San Francisco I figured 'I'm leaving all that behind. It's a southern New Jersey thing,'" Wiener said. "Nobody here has called me a kike or said I killed Jesus; it comes in a different form. I was very naive."

Wiener said that Jewish people have to remain vigilant because even a place that seems accepting can still turn on them.

Indeed, as the B.A.R. reported last year, Wiener was excoriated with both homophobic and anti-Semitic language by adherents of the QAnon conspiracy theory after he introduced a bill changing who qualifies for the California Sex Offender Registry (which later became law).

Gay District 8 Supervisor Rafael Mandelman, who is Jewish, stated to the Bay Area Reporter that he thought it was critical to attend.

"I thought it was important to be there in light of the troubling anti-Semitic incidents that have occurred in San Francisco recently, as well as the increase in hate-based attacks on members of other communities," Mandelman wrote. "I applaud [the Jewish Community Relations Council] for initiating their 'I am here' campaign and hope it will spark dialogue within and among impacted communities, connecting us all and making us stronger together."

Also in attendance was Honey Mahogany, a queer trans nonbinary person who is the chair of the San Francisco Democratic Party and a legislative aide to District 6 Supervisor Matt Haney. Mahogany stated to the B.A.R. that "it's heartbreaking to see the rise of anti-Semitic violence and rhetoric that we have seen recently."

"It's frustrating that we haven't been able to put this kind of discrimination to rest," Mahogany wrote. "Yet it was beautiful to see all the people that came together in solidarity against anti-Semitism."

Updated, 7/30/21: This article has been updated with comments from rafael Mandelman and Honey Mahogany.

Wiener fights back against QAnon conspiracies over sex offender registry bill
Sign up!