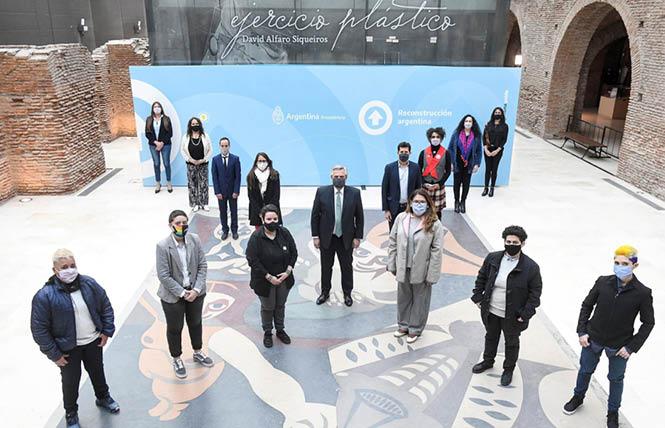 Argentine President Alberto Fernández, center, joined officials and activists in forming an "X" to mark the use of that letter to designate nonbinary people on identity documents, in a photo provided by the president's office. Photo: Maria Eugenia Cerutti/Argentine Presidency

Its President Alberto Fernández issued the decree at an official ceremony July 21, where he gave out the first three nonbinary identification cards in Buenos Aires.

"There are other identities besides that of man and woman, and they must be respected," Fernández said, with Minister of the Interior Eduardo de Pedro, and Minister of Women, Gender and Diversity Elizabeth Gómez Alcorta standing with him at the ceremony.

Dr. Gerónimo Carolina González Devesa, 35, Shanik Lucian Sosa Battisti, 27, and another individual who was not identified were the first to receive their new identification documents demarking their gender as "X" during the ceremony.

"For the first time I can say my full name and feel like it's legal," said González Devesa. "It's the end of a long battle."

Despite Argentina passing one of the most progressive self-determination laws in the world that allows transgender individuals to self-identify without legal or medical approval in 2012, González Devesa explained to the New York Times that national identity documentation still required specifying your sex after the law was passed. In effect, by not specifying male or female, gender-nonconforming individuals were undocumented.

It was a situation that provoked "constant anxiety," they told the Times.

Battisti described a similar feeling every time they were asked to produce identification that did not match their gender identity, it was a "torment," they told the Times. Battisti also won a legal battle in 2019 where a judge granted them the right to change their gender marker on their birth certificate to "NB" for nonbinary.

The president's own 26-year-old son, a well-known drag queen who goes by the name Dyhzy, might take advantage of the new decree, reported the Times. In a live Instagram video, Dyhzy said, "I consider myself a nonbinary person."

Zona FALGBT, an Argentine group of LGBTQ activists, praised the decree in a statement responding to the news. "It was a very moving moment for our LGBT+ community," the organization's leaders said.

Not all gender-nonconforming individuals agreed. The unidentified recipient of the new identification cards wore a T-shirt reading, "We are not X."

The statement was in support of a handful of gender activists protesting the new gender-neutral marker. The group claimed the decree did not go far enough. They called for the gender marker field to be left blank and for Argentina's government to pass more sweeping gender reforms targeting more inclusion of nonbinary gender identities, reported the Washington Post.

Fernández responded at the ceremony: "The ideal will be when all of us are just who we are and no one cares about people's gender. This is a step we are taking and I hope one day we get to the point where IDs don't say if someone is a man, woman, or anything else."

Argentina joins Australia, Canada, Denmark, Germany, Iceland, India, Nepal, and New Zealand in implementing X and O (for "others") markers on government-issued identification documents, including passports. At the end of June, the United States announced plans to issue gender-neutral passports.

In June, President Sebastian Pinera, Bachelet's conservative successor, surprised many people by announcing his support for same-sex marriage. The Senate passed the bill July 21, less than a month later. The Chamber of Deputies, the country's House of Representatives, will now take up the bill for its final approval.

The bill expands Chile's marriage law beyond a man and a woman to include same-sex couples, including adoption rights.

"We want to move toward a country with other values, which advances in justice and in eradicating all forms of discrimination," said Senate Speaker Yasna Provoste, a Christian Democrat who voted in favor of the bill, reported Agence France-Presse.

Oscar Rementeria, spokesman for the Movement for Homosexual Integration and Liberation (Movilh), Chile's leading LGBTQ rights organization, tweeted the vote was a "triumph of justice and equality."

"The end of discrimination against same-sex partners and same-sex parents is near. A better path for new generations," he said.

Movilh withdrew its 2012 same-sex marriage lawsuit at the Inter-American Commission on Human Rights after successfully negotiating an agreement with the country's government for same-sex marriage and adoption rights, reported the Washington Blade.

In 2017 the IACHR mandated that all Caribbean and Latin American member states legally recognize same-sex relationships either by allowing couples to register same-sex partnerships or through marriage.

Not everyone is applauding. AFP reported Pinera's conservative National Renovation Party member Manuel Jose Ossandon argued procreation is the "essence" between men and women that elevates marriage above same-sex relationships because "they do not have this option to procreate."

The proposed legislation, "The Promotion of Proper Human Sexual Rights and Ghanaian Family Values, Bill 2021," suggests jail sentences of up to 10 years for LGBTQ people and allies who promote homosexuality. It also criminalizes intersex people who do not undergo "gender realignment" surgery, according to the draft legislation.

Diplomats with access to the draft bill verified its authenticity after it went viral last week. Eight lawmakers submitted the draft legislation to parliament June 29, reported the Guardian. The Washington Blade reported it has not been introduced to parliament.

The proposed anti-gay bill is the first since Ghana won independence from colonial rule in 1957 to take a major step toward criminalizing homosexuality and gender-nonconforming people. The bill enjoys broad support from President Nana Akufo-Addo's government and members of parliament, reported the Guardian.

The proposed legislation comes after Ghana's government shuttered the West African country's only LGBTQ center in its capital, Accra, earlier this year and has since imposed a crackdown, sending LGBTQ community leaders into hiding and terrorizing anyone who is perceived as queer.

Ghanaian celebrities and other notable people of African descent and global LGBTQ and human rights leaders condemned the Gold Coast country's crackdown on its LGBTQ community and called for the government's support.

In parliament, Sosu called the bill a "recipe for chaos" and warned of "loss of benefits" if it passes. "It could derail the country in several ways as well," he said.

As criticism grew online, anti-LGBTQ Ghanaian Member of Parliament Sam Nartey George, who has led the charge for the crackdown on the country's queer community and is one of the bill's main proponents, called LGBTQ advocates "uninformed."

"Homosexuality is not a human right. It is a sexual preference," he wrote in a post on Twitter. "We shall pass this bill through."

The World Congress of Families, an American-based anti-LGBTQ organization, hosted a conference in Ghana in 2019. The draft carries signature traits of similar bills passed by other African nations, such as Nigeria and Uganda, and Russia, where WCF has exported its homophobic agenda.

LGBTQs demonstrate by attending Budapest Pride
Hungary's LGBTQ community took a stand against the government's anti-gay crackdown over the weekend. An estimated 30,000 Pridegoers took to Budapest streets in the largest Pride March in its 26-year history, reported the New York Times.

People wore T-shirts with slogans emblazoned with "adult content" and "Hungary" wrapped around the number 18, denoting the ban on LGBTQ content to minors, in a 40-minute procession.

"This makes gay people feel like they are public enemies," Peter Kreko, the director of Political Capital, a Budapest research group, told the Times.

Participants at the Pride event spoke out against Prime Minister Viktor Orban's anti-homosexuality propaganda bill. The Russian-styled law bars discussion and any media of LGBTQ issues, particularly in schools. Hungary's Parliament passed the law last month and it went into effect July 8.

The European Union swiftly took legal action against the member state before the end of June.

Orban has remained defiant against the E.U., accusing the 27-member state government body of "meddling" in Hungary's business.

In a July 22 livestream on the Hungarian government's Facebook page, he proposed a five-question referendum focused on the new anti-homosexuality propaganda law to bring before the public next year.

Some members of Parliament and LGBTQ activists accused Orban of attempting to use the LGBTQ community and the new law to distract from the more serious issues uncovered. Peter Jakab, president of the right-wing Jobbik party, called the referendum plan a "clear diversion" from the spying allegations, reported the AP.

LGBTQ activists criticized the referendum at the march and on European media. Luca Dudits, executive board member of the Hatter Society, Hungary's leading LGBTQI rights organization, on EuroNews Tonight criticized Orban for calling for a referendum.

She also accused Orban and the Hungarian government of using the referendum as a tool for distraction following E.U. findings on bigger issues, stating the "timing is no accident."

All Out launched a petition to urge the E.U. to continue pressuring Hungary's government.