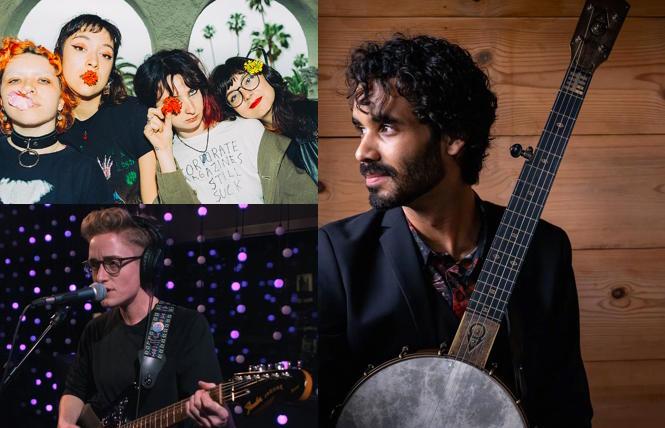 From dazzling debuts to familiar faces, in 2020, musicians produced a treasure trove of awesome audibles.

Recorded in late 2016, but not released until 2020, Nobody Cries Today, the brilliant debut by Southern gay singer-songwriter Matt Lovell was well worth the wait. In possession of a powerful and expressive set of pipes, Lovell delivers an album of original, soulful and country-influenced tunes that are worthy of repeated listens, including the knockout tracks "90 Proof," "Be Free," "Alligator Lily," "The Way That It Was," and a pair of duets with Leigh Nash — "The Gospel" and "Dime Adios."
www.mattlovellnusic.com

Father, the debut album by trans singer/songwriter Izzy Heltai, whose powerful voice at times recalls Jeff Buckley, goes a long way in giving his songs the necessary passion to convey their messages to listeners, as you can hear on "Marching Song," "To Talk About Yourself," "Songbird" and "Anyone to Anybody."
www.izzyheltai.com

Pass Like Pollen is the debut album by non-binary transmasc singer/songwriter Cartalk aka Chuck Moore, plays like a hybrid of modern twang and vintage grunge with a general indie rock vibe, which works well on "Noonday Devil," "Las Manos," "Driveway" and "Sleep," parking itself in a space reserved for irresistible pop on "Wrestling" and Elliot Smith-like folk on "Something or Nothing."

Expectations (Rounder), the debut album by young, lesbian singer/songwriter Katie Pruitt, is an admirable introduction to a talented artist, especially fans of Brandi Carlile and the aforementioned Becca Mancari. Pruitt's extraordinary and commanding vocal abilities, as well as her way to draw in the listener with her personal lyric style, are exemplified on the amazing "Georgia" ("There is a place past the Georgia pines/With people who welcome you with an open mind") as well as "Normal," "Loving Her" and "It's Always Been You."

Young, queer, Scottish-Canadian singer/songwriter Evangeline Gentle made an indelible impression with their eponymous Sonic Unyon debut album on which she struck the right balance between personal love songs ("Sundays," "Long Time Love," "Neither of Us") and universal observations ("Ordinary People," The Strongest People Have Tender Hearts") and the lightly twang-tinged tune "Even If."

Almost everything you need to know about gay singer/songwriter Kyle Motsinger, a self-described "theater queen who loves his pop," can be found in the title track to his debut album Any Way I Want To, on which he sings "My music sounds any way I want it to," and then follows it with "My voice sounds different than the other boys/It's not a sound that everyone enjoys," but he thinks it suits him well.
www.kylemotsinger.com

If you've ever wondered what it might sound like if David Sylvain (of Japan) fronted Prefab Sprout, your answer can be found on the soaring Flight by Tenant From Zero (aka queer Brooklyn musician Paul Darrah); a 21st-century reimagining of the best of `80s Brit-pop.

Fiddler and banjo player Jake Blount, described as "one of the few queer, Black voices in Appalachian music," called his album Spider Tales (Free Dirt), and proceeded to spin an elaborate and beautiful web on this reclamation project, adding a distinctly queer perspective to many of these tunes from early-to-mid 20th century. Blount's take on Lead Belly's "Where Did You Sleep Last Night" is particularly dazzling.

L.A.-based quartet Girl Friday's brilliantly titled Androgynous Mary (Hardly Art), with a cover photo depicting what can be best described as an old school butch, merges Riot Grrrl sensibilities with those of groundbreaking acts such as The Raincoats and Kleenex/LiliPUT.

Gay modern rock legend Bob Mould is among the hardest working men in music, proving that point by following up 2019's aptly titled Sunshine Rock with the somewhat bluer Blue Hearts (Merge). Blue in terms of sexual content (check out "Leather Dreams") as well as in the liberal political messaging in songs such as "American Crisis," "Next Generation" and "Heart on my Sleeve," all delivered in his trademark crunchy and blazing guitar rock style.

Still going strong after more than 35 years, Indigo Girls returned with its first studio album in five years, Look Long (Rounder), which continues the musical tradition that Amy Ray and Emily Saliers established all those years ago; a blend of modern Americana pop on the title tune, "Country Radio," "When We Were Writers" and "Sorrow and Joy," and memorable rockers including "Change My Heart," "Shit Kickin'" and "Favorite Flavor," all with an eye towards social commentary.

Rufus Wainwright took even longer —twelve years!— between albums of original pop music, and thankfully Unfollow the Rules (BMG), didn't disappoint, setting the political tone with opener "Trouble In Paradise," which is echoed in "Only the People That Love." Wainwright also didn't skimp on the operatic excesses on the dramatic "Early Morning Madness" and "My Little You," while adding a dash of hopefulness (and even humor) on the songs "You Ain't Big," "Peaceful Afternoon," "Damsel in Distress" and "Alone Time."