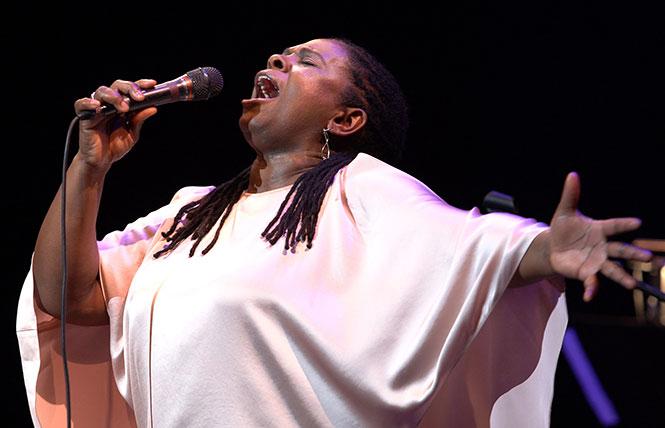 Out singer and songwriter Ruthie Foster has the kind of voice that can give you chills and warms your heart at the same time. Soulful, sassy and as powerful as a transformer, it doesn't matter if she's singing one of her marvelous original compositions or putting her distinctive touch on a standard, the result is always a delight.

This has never been truer than on her new concert recording Live at The Paramount (Blue Corn Music), recorded with her Big Band, where she illuminates more than a dozen songs across the genres. I had the pleasure of speaking with Ruthie in late April 2020. 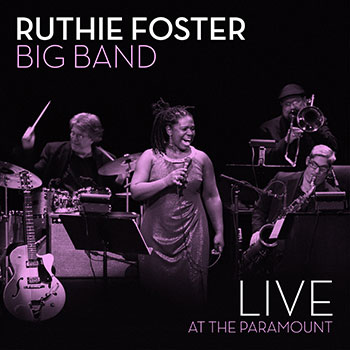 Gregg Shapiro: Live at The Paramount is your third live album following 2004's Stages and 2011's Live at Antone's. Why was now the time to release another live recording?
Ruthie Foster: Because this is a very different type of recording. I wanted to do a big band album. It's not something typical of what would come from me. I wanted to do something special. It's more of a concept album.

Your daughter is the one who does your introduction on Live at The Paramount. What can you tell me about the decision to have her do that?
I wanted her to be a part of the night. She loves music. She's a little superstar herself [laughs].

Does she perform or want to be a performer?
She has mentioned that. I take her to a lot of plays and musicals. She's seen Annie and a lot of different types of musicals. She's definitely interested in it. She goes to a summer camp where they put on their own musical, their own sketches and all of that.

The album contains several of your original compositions. Can you please say something about the process of selecting originals, not only for a concert, but also for a live recording?
I really just wanted to take my own music and then add the big band element to it; in that way, introduce people to the big band sound. I did a couple of standards at the end just to connect the dots. (But) I wanted to have my own music set to that style. For those who weren't connected to that sound it was a way to let them know it can go with anything. Any popular song can be turned into that.

Among the wonderful covers you do on Live at The Paramount, your distinctive reading of "Ring of Fire" really stands out. Why did you choose that song and make such a stylish arrangement?
I chose that one for that reason. I thought it was so different. To bring all of these different folks who love country music and folks who don't know anything about country music together. I guess I came up with that particular version when I was playing piano. I love those chords; I love major-seventh chords. The song fell right into that arrangement. I had the arrangement first. I've always been a huge Johnny Cash fan. My grandfather was a big Johnny Cash fan and he passed that on to me. 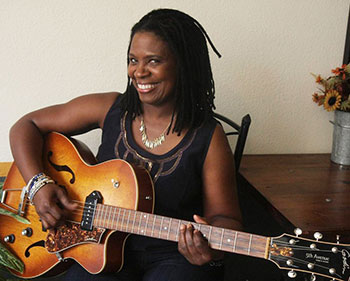 Your live albums have been recorded in Austin. What it is that makes an Austin audience special?
Austin is a special city. It's a very nurturing town for musicians. We all take care of each other and we all look after each other. As a matter of fact, I got a text this morning about some friends who are putting together a Willie Nelson birthday thing to wish him a happy birthday. I just wished him happy birthday yesterday. We all take care of each other; Austin is special that way.

With the current shelter in place status in most of the country, the way most people may be experiencing 'live performance' will be on live albums such as yours for some time to come. What will you miss most about live performance in these pandemic days?
I can tell you that I miss the energy in the room. When I get a chance to be in front of an audience, that's the most... the spirit that comes from the interaction, I truly miss that. But I'm trying to do like everyone else, live-stream. That's the best we can.

There's an amazing video on YouTube of you singing John Prine's "Angel From Montgomery" with Bonnie Raitt, as well as a Facebook video of you singing the song solo. John died a few weeks before this interview is taking place and I was wondering if you'd please say a few words about John and what his loss means to you.
I never got a chance to meet the man. I regret that. But I've been familiar with his music for many years. It goes back to my days being in Charleston, South Carolina, in the navy, I used to manage a music club there. Me and a friend of mine would sing his songs back and forth. He was a consummate songwriter. He had a way of getting in there. [For example] the song "Hello In There", the first of his songs I was introduced to. He had a way of being funny and a way of reaching in and touching you and a way of opening your heart wide open. "Dear Abby" [laughs], that's a fun one.

Could you ever foresee recording an entire album of Prine covers?
Oh, well, there's an idea! I'd never even thought about doing that. I so love the way everyone else sings his songs. I sing them for myself. But that is a great idea!

Thank you! Earlier we talked about the current situation with the pandemic. Because of that, most Pride festivals across the country are cancelling in a domino effect. With that in mind, how will you be observing Pride this year?
I had plans to be in New York during that time for the big celebration. It's a huge disappointment not being able to do that. Hopefully we'll be able to gather some by June. If not, I'm sure we'll be able to figure something, maybe even livestream. Do something special.

Have you started writing or thinking about songs for your next studio album?
Yes. I've already been in touch with my band. We're sending songs back and forth. I think my drummer is sending me something today. He's putting something down on a song that my keyboard player Scottie Miller and I wrote together. Yeah, we're writing now!