Queer music at Bottom of the Hill 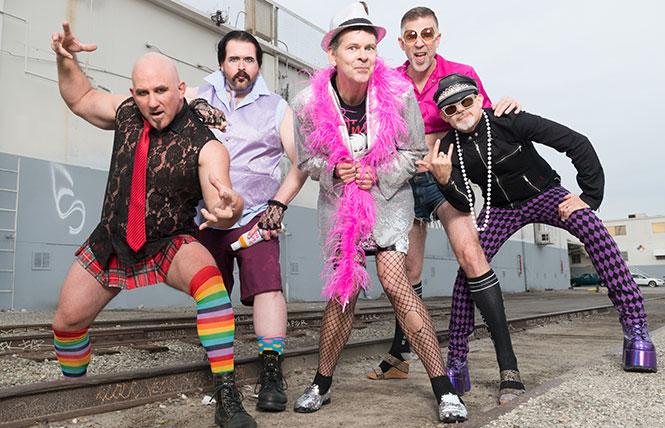 On March 14 three very queer bands will join forces for a night of queer rockin' and rollin' at Bottom of the Hill on 17th Street. GayC/DC, Middle Aged Queers and The Homobiles will rock out in a totally out way.

GayC/DC will be joined by The Homobiles, who describe themselves as "a queer party punk supergroup singing songs about cars and babes, crimes and change, ballot measures." The band is typified by punky musical numbers such as "Homo Safe."

And finally, the evening will be rounded out by the appearance of Middle Aged Queers, "Bay Area
queerdos making noise in the sunset prime of our lives." 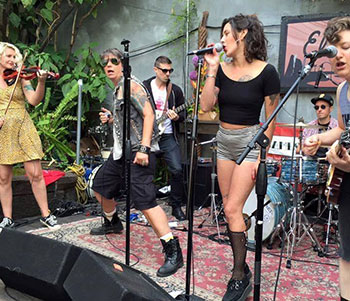 Party punks
Homobiles' spokesperson Fureigh tells the Bay Area Reporter that the band has been around for five years.

"We got the name because Lynnee (vocalist and published author Lynn Breedlove) started and runs a nonprofit rideshare service called Homobiles, dedicated to providing secure, reliable, donation based transit to the LGBTIQQ+ community and its allies," said Fureigh. "We had a gig coming up and were tossing around some possible names, and Lynnee joked about us writing songs about cars and babes. We went with it and the name stuck."

Fureigh noted that rideshare giant Uber got their idea from Homobiles; the company publicly acknowledged as much during their recent initial public offering.

They describe their music as "party punk."

"Which is to say, we give a damn and you can dance to it," Fureigh said. "We write a lot of songs that reference San Francisco spaces we've loved and lost, like the Lusty Lady and the Lexington. We have a rowdy one about the criminalization of homelessness and poverty. And I like to joke that lately we've been building a set of 'revenge-core' songs. We do also have some songs that are really truly about cars and babes."

The Homobiles are building up a following that transcends sexual and gender identity.

"I think there's a lot of power in defiant joy," said Fureigh. "As an out performer, it's a privilege to have the opportunity to cultivate and demonstrate that. In a time of so many attacks on our very existence as queer and especially trans people, just continuing to send our beacons out and remind each other that we're still here, that we're still thriving, and that we've got each other's backs, for me at last, seeing that lends courage and it lends hope. My theory of change isn't that that's sufficient, but it's still absolutely necessary." 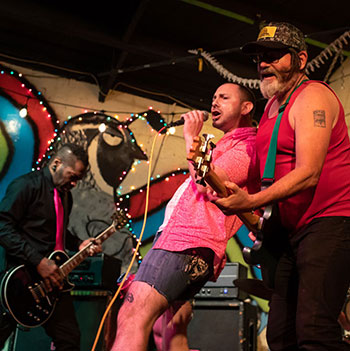 Middlin' punk
Members of Middle Aged Queers have long histories of playing in a variety of bands.

"All of us had previously played in other punk bands," said Shaun Osburn, who, according to the band's official description, yells and calls it singing. "But none of us had played as out musicians delivering queer content. While all our previous bands were under the punk umbrella, they were stylistically different. What connects us all is the desire to make music again in a capacity that goes against heteronormative standards of style, lyrical content, or expectations of behavior."

Osburn noted that the band came together through a social media post that bassist Josh Levine did for recruiting members for a "middle-aged Queercore band."

That's actually where our name came from," said Osburn. "We kept referring to our group as our 'band of middle aged queers.'"

He describes the band's music simply, as rock music. The concert will also serve as a record release party for Middle Aged Queers' debut record, Too Fag For Love.

"We are a queer punk rock band," he said. "We've been compared to everything from The Descendants, The Adolescents, The Damned and even past local punk bands like Black Fork. I think those are all fair comparisons. We don't have a specific sub-genre of punk rock that we feel beholden to, we just want it to rock. We're high energy. I always encourage the audience to participate in some levels, though people are certainly welcome to be just spectators."

Shook me all night
GayC/DC came about when several members of an all-gay male tribute band to the Go-Gos, called the Gay-Gays, decided that they wanted to keep playing together when the Gay-Gays split up.

"We only do AC/DC songs, but with a twist," said Freeman. "The main goal is to get the music right. It we were going to attempt pulling off an iconic metal band like AC/DC, it had to be musically spot on."

"Lyrically, I've had my way with most of the songs we play," Freeman said. "But some needed no modification, like 'Big Balls.' Just the context of having a guy in a dress sing those lyrics brings enough of a twist. Others, like 'Whole Lotta Rosie,' had a gender mod, so now it's 'Whole Lotta José.' The important thing is to entertain, and humor is one of our trademarks. I inject as much humor into my revised lyrics as possible."

"Each of us in this band has a deep love and respect for AC/DC, so the first thing we all agreed on was that the music had to be done properly," added bandmate Brian Welch. "We also agreed to do the album versions of the songs, as those were the ones that everyone knows and would sing along to. And that's where changing the lyrics would really be noticed. We wanted to see lyrics that we wish we could have sung along to growing up and discovering AC/DC. To turn such testosterone-fueled lyrics around to reflect LGBTQ life, but keeping the songs as heavy as they are, is what I'd say our mission became."

Freeman addressed why he feels its important to be an out performer. While part of Pansy Division, he lost five boyfriends during the AIDS crisis, all while living with a president who never uttered the word.

"It was super important for us to use our voice as a band to speak up and break the mold," he said, recalling that two weeks after he joined Pansy Division, Freddie Mercury died, taking his sexuality to the grave.

"We decided that we were never going to shut up," he added. "We were going to shove our little cultural experiment down everyone's throats."

Both Freeman and Pansy Division founder Jon Ginoli had been in bands before, but they had to deal with the two unwritten rules of the music industry: you'll never get a record deal if you're over 30, or if you're openly gay.