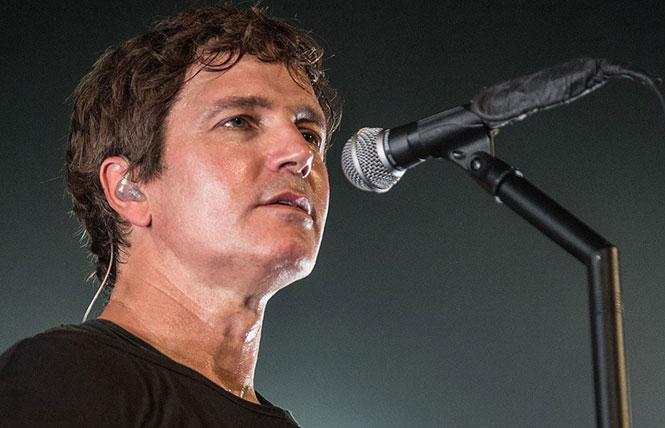 It's been 27 years since Stephan Jenkins put together the first lineup of Third Eye Blind here in San Francisco. But when the band —whose hits include the "Never Let You Go," "How's It Going To Be" and the still-ubiquitous late-20th-century anthem "Semi-Charmed Life"— plays Oakland's Fox Theater next Friday, March 13, Jenkins says it'll by no means be a wallow in nostalgia, for either the musicians or the fans.

For Screamer, Third Eye Blind's recently released, and super crunchy, new album, Jenkins wrote a song called "The Kids Are Coming to Take You Down." He clearly counts himself as one of those rabble-rousers, joking, "Look at how long I've been 28!" (Jenkins is 55).

"We have a bigger audience than we've ever had," says Jenkins, the only consistent member of the group from its start. "And the reason it's growing is kids in their teens and twenties. They don't know us from their parents, they know us from playlists, from streaming. Something we're doing now resonates with them. We are part of their present tense."

Some of what feels present tense to many millennials —an unforced, organic embrace of diversity, including queerness— reflects mainstream pop culture's catching up with ideas that were already present in the San Francisco music scene of the early 1990s when Third Eye Blind first started playing gigs at clubs including SoMa's Paradise Lounge.

"I came up in San Francisco," says Jenkins, who lives in the Mission. "Queer culture was always part of my life. It's an influence on me and my music in the same way that hip-hop culture is."

Perhaps more so, because while Jenkins sometimes breaks from his melodies to launch into a distinctive rhythmic talk-singing that could possibly be considered rap-adjacent, he's both obliquely and directly addressed LGBTQ topics and personae in his lyrics since the band's earliest work. 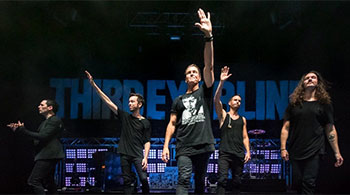 "That whole first record," Jenkins says of their six-time-platinum eponymous 1996 debut, "was about processing a relationship I was in with a woman who was figuring out that she was a lesbian. I admired her integrity of identity. To assert your identity when you know it will have consequences is really powerful. And I think in some ways, in the years since that record came out, the culture at large has moved in that direction."

In 1999, Third Eye Blind released "Jumper," a dark, heartfelt single that Jenkins wrote in the wake of a news report of a gay teen committing suicide by leaping from the Coronado Bridge in San Diego.

"When I wrote it," Jenkins recalls, "It felt like such a dark song. This kid was being bullied so much he felt like he had to take his own life."

Over time though, "Jumper" has transformed into an anthem of solidarity. Its chorus' repeated, urging "Wish you would step back from that ledge my friend" and the waves of empathy that vibrate from Jenkins' "I would understand" are a collective balm, which regularly manifests in tear-streaked sing-alongs.

"At our concerts," says Jenkins, "I just start the song and the audience runs with it. I think we each have a reservoir of understanding and acceptance for each other that's more than we sometimes give ourselves credit for."

Last year, Ian Shannon, 31, a hardcore fan who traveled extensively to attend Third Eye Blind concerts, was stabbed to death by a boyfriend. In the wake of the murder, the band and its online community raised funds for the Women's Resource Center (which provides gender-agnostic support for victims of domestic violence) near Shannon's home in Lancaster, Pennsylvania. Jenkins also paid tribute to Shannon to concert audiences, praising him for having come out and lived openly in a conservative community.

"I prefer not to be overtly political on stage," says Jenkins. "The concert experience is about bringing people together and sharing a powerful collective feeling. There's a moment of gathering that a group feels engaging with music together, but it's not political. I'm not going to be up there saying you're not doing enough about this issue or that. But if you provoke me about my opinion, then I'm gonna spit it."

That's exactly what happened in the thick of our last presidential election season. "We were booked to play this show in Cleveland. It was supposed to be a fundraiser for Musicians On Call, which is an organization I have worked with, visiting sick kids in hospitals. But they were trying to hustle us. It was mainly an event for music industry lobbyists who were in town for the Republican convention. So basically, we were being used as entertainment for these guys.

"So I get there and I see all these guys in blazers and turned up polo collars and I know it's not right. The crew was already there, and they're like, 'What the fuck are we doing here?' As we're going onstage, one of the organizers says 'Let's just keep it non-political' and in my head, I'm like, 'It's on.'"

In a performance that may go down in history as Third Eye Blind's most famous, the band —later condemned on Fox News and other conservative media— trolled the audience ("Who here believes in science?!" and played a set free of hits, except one.

"I got up and talked about my cousins who are gay and how they have to hassle with all this nonsense that's the Republican party just because they want equal rights," recalls Jenkins. "How they're just people trying to live with decency and opportunity and the right to self-expression."

Then Third Eye Blind treated their audience to a rousing rendition of "Jumper."