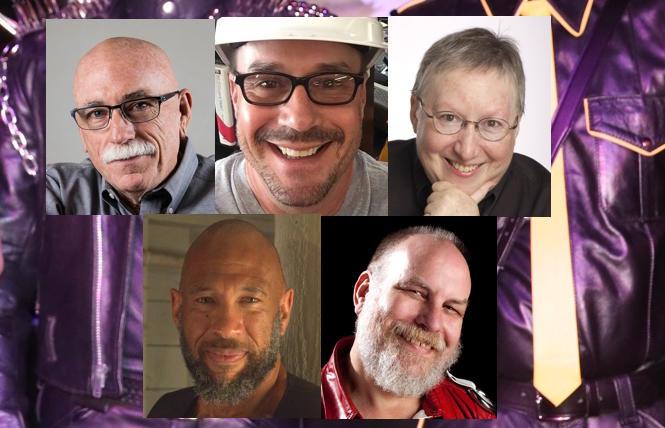 As part of the Bay Area Reporter's monthly B.A.R. Talks series, the September 2 online event will be a conversation with Race Bannon, Scott Brogan, Gayle Rubin, Rich Stadtmiller and Graylin Thornton, who each have a longtime connection to the leather/kink community is various ways.

The panel will take place online Thursday, Sept. 2, from 6pm to 7:30pm PT, on the Bay Area Reporter's Facebook page and YouTube channel, live, then archived.

From its earliest issues in the 1970s, the Bay Area Reporter covered the Leather and kink community even before its legendary columnist, Mr. Marcus Hernandez, began writing for the paper under his own name. From expansive coverage of local, regional and national contests, to ongoing social events in the Bay Area, and even gossip, the Leather/Kink community has had a home with the B.A.R.

Two former columnists, an historian, a title-holder and organizer, and a prolific photographer each share their memories (plus photos and vintage articles) of how the longest-running LGBT newspaper became a pioneer for decades of coverage of the Leather community.

Race Bannon (moderator) has been an organizer, writer, educator, speaker and activist in the LGBT, leather/kink, polyamory and HIV/STI prevention realms since 1973. Among his multiple achievements, he was the Bay Area Reporter's most recent leather columnist, sainted by the Sisters of Perpetual Indulgence.

Scott Brogan has been a part of the vibrant leather community in San Francisco since first moving to the Bay Area with his husband in 2000. As Mr. Edge Leather 2002, he was the first boy to break the top five at IML while wearing his collar the entire time and gave the "boy speech." He was also co-founder of the SF boys of leather, and took over the leather column in the Bay Area Reporter after the death of Marcus Hernandez.

Gayle Rubin is a noted scholar of San Francisco leather history and social life, and of the politics and economics of South of Market. She was a founding member of the GLBT Society, and was involved in the establishment of the Leather Archives & Museum, on whose Board of Directors she currently serves. She is also a member of the Board of the Leather and LGBTQ Cultural District in San Francisco. Rubin has been active in many leather organizations and events, and has taught at Harvard University and many other schools. She's currently Associate Professor of Anthropology, and Women's and Gender Studies at the University of Michigan.

Graylin K. Thornton, International Mr. Drummer 1993, is an original member of South Bay Leather and Uniform Group, formed in 1987, and has produced many Bay Area leather events for decades. A founding national board member of the Leather Leadership Conference, Graylin was also chosen Community and Leather Grand Marshall for the San Francisco Pride Parade and in 2019. He's currently a founding member of ONYX Northwest and was recently elected to the board of the Tom of Finland Foundation.

Rich Stadtmiller is the force behind www.RichTrove.com, arguably the SF Bay Area's most extensive on-line GLBT event image archive and the world's largest collective community album. A multiple community award recipient, Stadtmiller has also been the official photographer for several leather and bear-themed events. In addition to the RichTrove Archive, Rich's credited images have appeared in the Bay Area Reporter and several other publications. Rich organized and financially backed the Hayward Pride Street Festival in 2005 and 2006, and was an early supporter of Leather Levi Weekend. He's been a presenter on leather spirituality at Leather Leadership Conference 12 and other venues. He has also presented at the SF Leather Discussion Group, LLC 12 and Sacramento Valley Leather Corps on the importance of preserving memories.

This is a fifth in the B.A.R.'s monthly series of online panels celebrating the newspaper's 50th anniversary. Again, the panel will be held Thursday, Sept. 2, 2021 6pm to 7:30pm PT, on the Bay Area Reporter's Facebook page and YouTube channel (live, then archived).