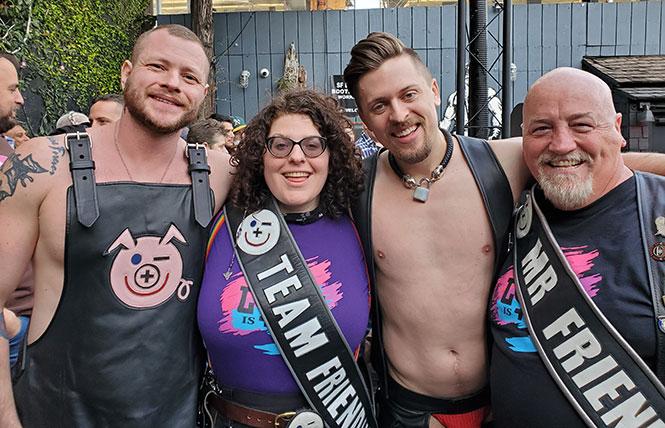 If there is anything in life that's unavoidable, it's change. One moment you're traveling along a well-worn path, only to find out the path now has more branch paths, and it turns out those new paths branch out yet again.

Or, a path might become a dead end because what was best for that path before isn't best for it now. So, you take another path.

Life is unique each moment and as time passes we adapt and recalibrate our lives
and environments. New paths. Change. One must keep up with the times or be left in the dust wondering what happened.

Mr. Friendly is a well-known national campaign with deep roots in the leather and kink communities founded by Dave Watt to help fight the stigma of HIV. Recently, the folks in Mr. Friendly reacted to what they saw as a need for a new approach. They rebranded their campaign and announced opportunities for their official representatives to be of any gender or orientation. 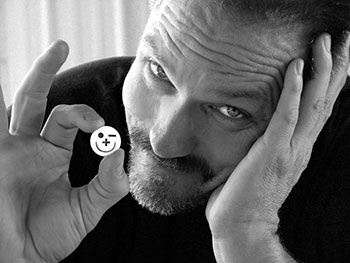 Dave Watt, the founder of the national Mr Friendly campaign that has been renamed Team Friendly.

Watt said this about the change.

"Our Friendly campaign recognizes the importance of reaching everyone, as HIV affects all persons. One aspect of our mission is to ensure that this program speaks, without limitations, to our society's expanding understanding of gender. It is for this reason that we have decided to drop the 'Mr' from our campaign."

"We are thrilled to announce that we are rebranding to 'Team Friendly' as we have found that the term Team Friendly best expresses our mission to fight stigma of HIV, one Friendly conversation at a time. We listen. We learn. We change."

"To combat stigma, we are constantly evaluating and evolving our campaign to be more inclusive. Goodbye 'Mr;' hello 'Team!'"

Last Sunday at the SF Eagle the San Francisco chapter of Team Friendly announced their new 2020 representative. Lady Byrd was designated the new Team Friendly SF Ambassador and she becomes the first woman to hold such a position.

I asked Lady Byrd how she felt about becoming the first Team Friendly SF appointee.

"Team Friendly is about combating stigma in a kind and compassionate way. I find that mission beautiful because, to me, stigma is a barrier that keeps us from truly connecting with others. I hope to inspire people to move away from a place of stigma and toward a more loving, friendly way of being."

I know that such changes can be both welcome and controversial within the kink communities, but in this case since HIV has an impact on people of all genders and orientations, the change seems like simply acknowledging the need to adapt to reality.

Good luck Lady Byrd. May your year be a good one. 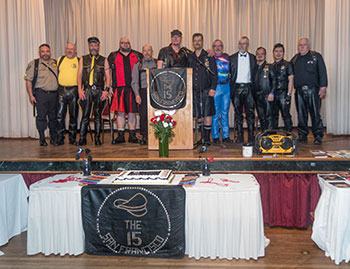 Eric See, Chairman of The 15 Association (at podium), surrounded by most of the fraternal members of the club. Photo: Rich Stadtmiller 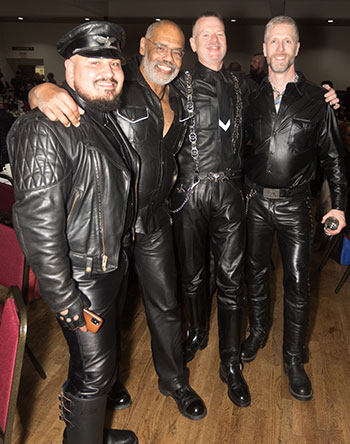 I asked Eric See, Chairman of The 15 Association, to reflect on his club's long history.

"I am so amazed at the strength of our club at 40. While so many leather clubs are struggling, the 15 association has figured out a good formula for success: focus on fun, play, and sex. Keep fundraising to only what's necessary. Build a sense of brotherhood and keep strife and drama to a minimum. We had over 160 members and guests from around the world attend a weekend of activities. Everyone left with smiles on their faces."

Congratulations to The 15 Association on 40 years of being an integral part of San Francisco men's leather culture. In an era when many such clubs are challenged to attract members this club's strength is a sure sign that our local kink scene is still alive and vibrant.

For Leather events and Race's previous columns, go to https://www.ebar.com/bartab/leather-kink