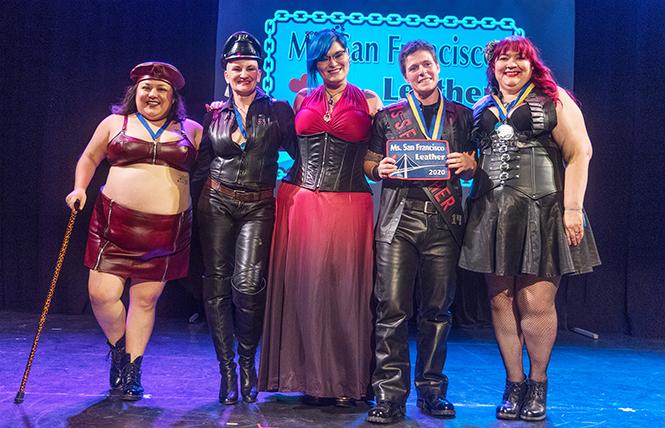 The new Ms. San Francisco Leather 2020 is Caity Lynch. Caity won among a field of top-notch competitors who all did outstanding: Ms. WillowKat, Lola Ursula, and Tammy Lg Hatter. Tammy was the first runner up.

Those tasked with selecting the winner were Vick Germany, Bennett, Haley, Miss Lola Sunshine, Jack Thompson, Jawn Marques, and Tomo. The competition was so good that as an audience member I hadn't a clue who would end up winning.

Those are just some of the people to whom I might tip my hat, because it was one of the best run contests I've seen in a long time; that's what I want to focus on. 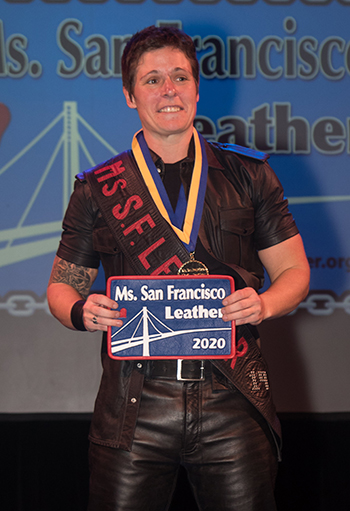 Producer Daddy Sal and the entire production and volunteer crew for the contest should be lauded for listening to past audience and community input.

After an easy and efficient door check-in process and a nice length of time for audience mingling and socializing, the contest started on time! I know starting an event on time shouldn't be exceptional, but it's rare enough that I think it needs to be applauded when it happens.

As for the contest itself, I loved just about everything they did.

The skilled emcee, Val Langmuir, moved it all along quickly and with lots of humor.
Instead of lengthy judges' bios they read concise, abbreviated versions (sometimes those go on forever during other contests).

They had the past Ms. SF Leather winners in the audience stand to be recognized rather than take the time to go on stage.

There was an intermission long enough to get a drink and adequately socialize a bit.
The silent auction, bar and bootblack setups were executed flawlessly.

While I know it was the competitors who were responsible for creating their fantasy performances, they were so tight and entertaining that at times I wondered if they'd been coached by an entertainment professional.

The final contest results were essentially immediate. No killing time at the end and waiting!

If they had also eliminated the introduction of all current titleholders on stage (this takes a lot of time) and had them stand up instead like they did for the past Ms. SF Leather winners, it would have been a nearly perfect contest in my eyes; maybe next year.

And the audience loved it. People afterward kept commenting repeatedly how appreciative they were of the changes and the speed with which the contest was completed. At least a dozen people must have said that to me.

Well done, Ms. SF Leather! May other contests emulate you. 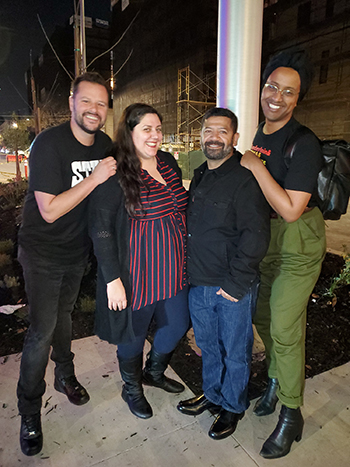 Crawling around SoMa
On Thursday, February 6, the Leather & LGBTQ Cultural District, along with District 6 Supervisor Matt Haney, sponsored a South of Market bar crawl. I did the entire crawl with at least 50 other people in attendance as we started at The Stud and moved on to the Powerhouse, Hole in the Wall, The Lone Star Saloon, and ended up at the SF Eagle.
I loved that the District sponsored this event, which gave attendees a chance to mingle with some of the District staff and Board and learn about the great work the District has planned for the future.

Beth Hunt, the Cultural District Manager, said this about the crawl.

"The bar crawl was a great success! We were honored to have Supervisor Matt Haney and the new director off SFMTA Jeffrey Tumlin join in the fun. We look forward to future collaborations with all our guests from West CBD, SF Pride, and D6. This is how we build a stronger neighborhood."

To ensure that the District has sufficient community input, they are hosting a Town Hall gathering on Wednesday, March 25, from 6pm to 9pm in the Rainbow Room at the San Francisco LGBT Center at 1800 Market Street.

During the Town Hall, the District will provide highlights of their work and vision, present plans for developing a long-term strategy (a CHHESS report) and seek community input through breakout groups. So, if you want to influence the future of the District, attend this event and participate in a breakout group. Anyone with a stake in the District's success is welcome.

Mark your calendars also for Saturday, May 9. That's when the District will be hosting its official Launch Event at Folsom Street Foundry, 5pm-9pm, showcasing various aspects of the District. There will be performances, food from local restaurants, leather demonstrations, a bootblack, and a maker's market with community vendors, craftspeople, and artists. Admission is free. While wearing the leather or gear that makes you feel sexy is encouraged, it's not required.

We are so lucky to live in a city that has the open-minded heart to have a Leather & LGBTQ Cultural District in the first place, and even luckier that it's actively engaging with its local community constituents in such a welcoming and inclusive manner.