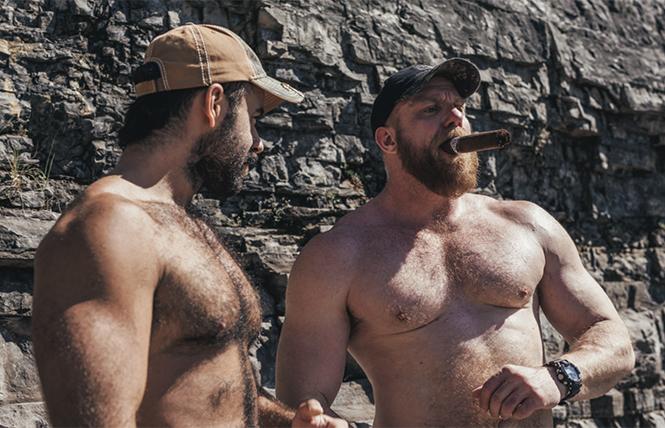 Any man who traveled within the gay leather world of the late 1970s, '80s and '90s likely read or knew of Drummer magazine. Founded by John H. Embry and Jeanne Barney in Los Angeles in 1975, it quickly grew to become the iconic publication chronicling and nurturing the fantasies of gay men's leather subculture.

The last issue of Drummer was published in 1999. Until now. Drummer is back. In early October a new iteration of the magazine debuted.

I asked Jack MacCullum, the owner and Publisher of the new Drummer, what made him decide to bring back the magazine and the process to acquire it. 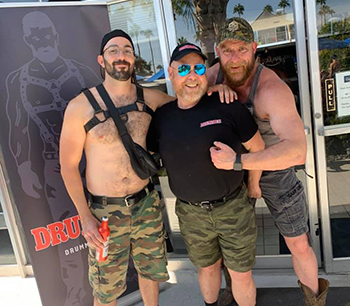 "The process was actually quite interesting. Drummer magazine and the associated contest has been a large part of my coming out experience since 1979, from the first time I picked up the magazine to my title run in 1988 to my run for Mid-Atlantic Drummer (D.N.A., aka Drummer North America) in 2016, and then becoming the National titleholder for D.N.A. in 2017.

"I ran for D.N.A. understanding it was the original Drummer title. In January 2018, as the current titleholder of D.N.A., I experienced the implosion of that title circuit and was appointed the epicenter of that implosion. My partner, Spike, and I began some research on who actually owned Drummer — the magazine, events and contest. The internet is an amazing thing.

"After some digging, we found that the last owner was Martijn Bakker, owner of RoB Amsterdam. I began negotiating with Martijn in March of 2018. Over a period of six months we came to an agreement and I finalized the purchase during Amsterdam Leather Pride 2018."

Mike Miksche, the Editor of Drummer, mentioned that prior to the magazine's launch he and MacCullum were quite nervous. They felt a lot of pressure to live up to the original Drummer of yesteryear. Their objective was to be true to its roots while still looking to the future. Miksche reports that the response has been overwhelmingly positive. 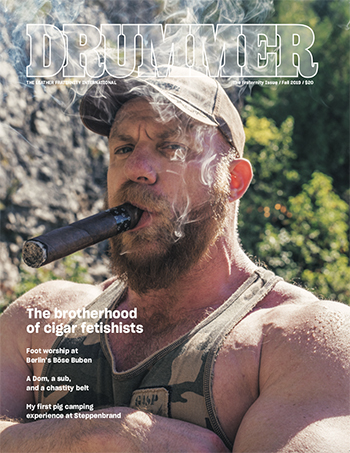 While Miksche says that he hasn't heard a single negative thing about the relaunched magazine, he and MacCullum are always open to constructive criticism that can help them improve the magazine for future issues.

I asked Miksche what their vision was for the new Drummer.

"Our vision is to accurately reflect the gay leather scene while educating our readers about fetishes and kinks that are under-reported or underrepresented. One of my hopes is that this magazine will teach kinksters in remote places that there's nothing wrong with the kinky desires that they might be feeling."

The relaunch of the magazine has been active and robust. They've already had relaunch parties in Berlin and Palm Springs. They have others planned for Fort Lauderdale and Toronto, and there will be an event they're co-hosting in London next year. Along with the magazine relaunch, they've made available Drummer-branded merchandise that they hope to expand over time.

MacCullum and Miksche are both dedicated to honoring the reputation of the original Drummer. When it came to designing the look of the new magazine, it was important for them to stay true to the magazine's roots. So, they ended up using the original logo from 1975, but created a modern environment in which it can exist. 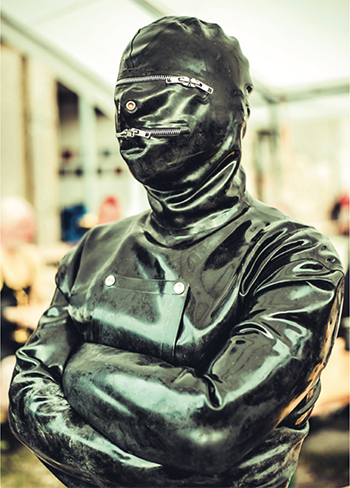 The new Drummer magazine intends to represent kinks and fetishes of many kinds, rubber being one of them. Photo: PIGtures

Another way they honored the original was through publication issue numbering. The original Drummer ended at issue 214. They relaunched the magazine as issue 215. They have also reached out to some original Drummer alumni to advise and contribute, and many have said yes.

The impetus behind reviving Drummer was a feeling that it is unlike any other publication currently available. As MacCullum pointed out in the premiere issue, "Our goal is to celebrate masculine, gay leather sexuality that is free of misogyny, transphobia, and racism of any kind."

The new magazine's team doesn't feel there is a gay leather and kink publication currently doing that in North America. They hope Drummer fills that void.

Another unique aspect of the magazine is their intention to use real men in the photography versus models whenever possible so that it best reflects their readers. Other fetish publications tend to use young men who are muscled or lean. There's nothing wrong with that, but Drummer is choosing to go for something more real and honest, because they think it's much sexier.

I'm excited to see an important magazine for kinky gay men rise from the ashes. For information about Drummer, visit their website: www.DrummerMen.com