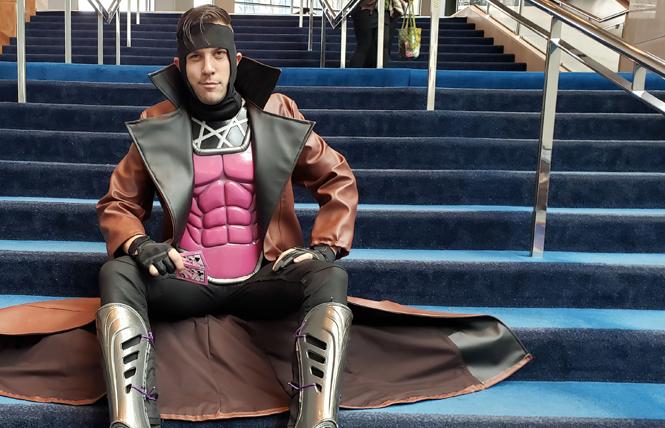 It's no secret that the kinky crowd likes their fetish wear. Leather, rubber and certain uniforms have served as ubiquitous standard fare for a long time. They remain core scene aesthetics. I don't see that changing dramatically anytime soon.

Perhaps the costume of yesteryear becomes the mainstream fetish of the future. Might not the first pup hood worn have been seen as a costume by some even if the wearer felt it best represented his sexual insides? Quite likely.

Cultures, including sexual cultures, change over time and appropriate (I know that's a loaded word for some, but it's apt here) how they dress from any source that resonates, consciously or subconsciously. Does anyone think formal leather dress emerged out of thin air? It emerged from sources such as military, police and other uniformed groups blended with the rebel biker look to create something new. Most everything we wear is a mashup of something else.

Kinksters also appropriate imagery and personas they see in movies, television shows and comics. The recent uptick in superhero fetishism is a good example of that.
I asked local kinkster Chris Prottas what types of costumes he connects to erotically. While he certainly likes superheroes, his interests include other characters.

"When it comes to the types of costumes that resonate with my sexuality and kink, I lean most towards superheroes and to certain video game characters," said Prottas. "I also have a penchant for historical garb. When it comes to heroes and game characters, I think what resonates most for me is the stories behind the characters. I'm drawn most to those who have a pretty rough or mysterious origin, because it reflects strength of character and the ability to fight against all odds and win. 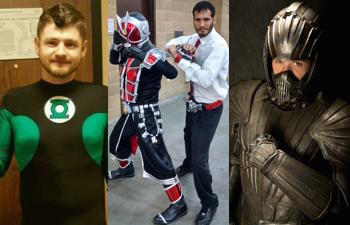 "To me, it is sexy and empowering as someone who is both an immigrant as well as someone who didn't have an easy upbringing," Prottas added. "The ownership of one's destiny that those characters accept wholeheartedly, and their willingness to sacrifice everything for a cause, is inspiring and powerful."

When I started to discuss the topic of this column with a few friends, there was one name that kept being mentioned, Shawn Kinnear. Shawn has been a long-time aficionado of a large swath of fetish and kink clothing from classic leather and uniforms to superheroes and other media-inspired characters.

Shawn had this to say about the types of fetish costumes that work for him.

"There are many. Spandex-type costumes have that sexy feel specifically because of the material. Usually hero-type characters with some super-abilities are my pick. I think because of their inherent strength and power I'm attracted to them. But then again, I have done villains that make me feel sexy too. The materials and style of costume also draw me in. Some are leather or spandex, even rubber. Seeing as most characters are animated, it's easy to make them out of any material that you're attracted to — leather, rubber, spandex, even modified uniforms."

Shawn feels that an array of looks has always been seen as fetish, but social media and the connectedness of the internet has made it easier to discover fellow such fetishists.

For a lot of folks like Fred, those heroes were their first sexual sensations experienced through the character's costumes, physiques, art style, or personality.
Seeing those things now becoming more visible and accepted is affirmation that such interests are viewed with a more welcome attitude.

This Halloween, you may be meeting some people's inner superhero costume fetish. 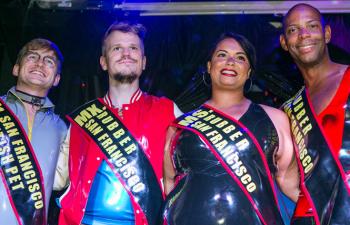 Local Rubber Titles
While I don't typically categorize rubber as costume, the range of rubber gear I saw on display at the San Francisco Bay Area Title Elections event at the SF Eagle this past Saturday was certainly diverse and often quite colorful and playful.

I'm newer to hanging out with the rubber crowd, and I have to say they're generally an extremely friendly bunch who embrace their kink readily; great community.

If you haven't had a chance to connect with the San Francisco Bay Area Rubber crowd, seek them out. They're fun people who fully understand kink and fetish are ultimately supposed to be about having fun.