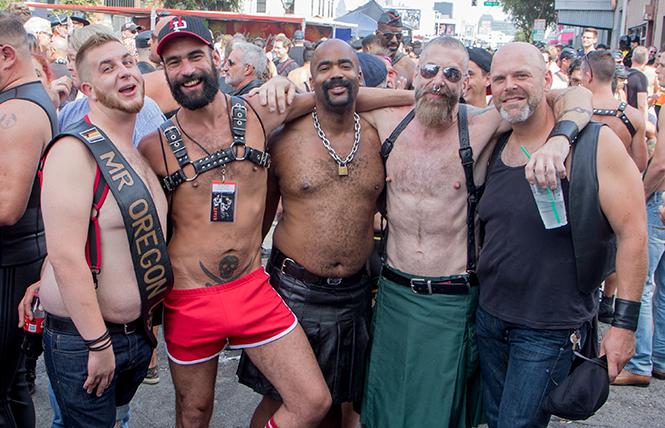 Sexy folks like these get to enjoy Folsom Street Fair because a few people got together years ago to produce an anti-gentrification neighborhood street event that blossomed in the Fair today. You never know how seeds will grow. photo: Rich Stadtmiller

If I possess any skill, apart from being able to string words together in a somewhat coherent manner, it's my ability to see connections between various things in life.

One moment I'm experiencing or reading something and then suddenly my brain does an ornate game of Connect the Dots and I'm making new connections between what might otherwise appear to be disparate ideas or facts. Occasionally it spawns one of those 'Ah-ha' moments. That happened this week.

As background, I attended two leather community meetings, one of which was rather contentious. I was developing a marketing plan for a big fundraiser. Someone discussed with me how to produce a successful sex party. I was engaged in some deep discussions online about some meaty leather and kink topics.

I witnessed the sad demise of one of the city's gay sex clubs due to gentrification and then participated in the subsequent churn of discussion with friends on how to save our disappearing spaces. Someone else reached out to me because they were depressed and simply needed to talk. Someone asked me for some advice on how to best navigate the Daddy role. Three producers sent me their event information asking me to promote them. A small group of us leathermen did an ad hoc meetup at a local bar and we hung out for a while.

In some way, all of that is related to building and fostering community within our local kinky ranks. Whether on a big macro city-wide level or smaller micro-personal level, all that stuff was related in some way to encouraging new and ongoing connections between kinksters. They all contribute to keeping connections and the people within them happy, healthy and thriving, or at least attempting to do so.

Being a quote collector, this week I also happened to be scanning quotation repositories and ran across one I really liked by Brian Eno, the English musician, producer and artist best known for his work in ambient and certain other music forms. 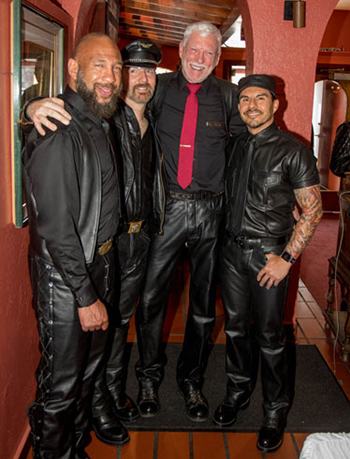 These guys can today enjoy the annual BLUF SF dinner attended by hundreds because a guy named Leon created a simple website in 1997 for men into full leather uniforms. Tiny seeds can grow into huge networks of people. photo: Rich Stadtmiller

"My kind of composing is more like the work of a gardener. The gardener takes his seeds and scatters them, knowing what he is planting but not quite what will grow where and when - and he won't necessarily be able to reproduce it again afterwards either."

The moment I read that quote, it struck me that this gardener and garden metaphor seems to describe what many of us in the leather and kink communities (and virtually every community) try to do all the time.

We plant seeds of varying kinds with the full knowledge of what we're planting, but without the faintest idea if those seeds will blossom into anything.

We plant the seeds. We hope things grow. We tend the garden to the best of our abilities.

Why is this important? Well, for a few reasons, and while I know that this is a topic I've touched upon before in this publication and elsewhere, it's also the main reason I write here; to build community, to maintain community, to empower every single person with a kink bent to their sexuality or a unique perspective on their relationship configurations to feel that they can be fully and entirely themselves, both alone and communally.

Just as important, everyone needs to realize that they can plants seeds. It doesn't necessarily take a committee or group. It only takes one person to cast the seeds on the ground.

One of the things I hear all the time is the bemoaning of lost leather and kink culture, specifically physical spaces that succumb to gentrification or lack of support. Of course, leather bars are the classic example of this, but we're losing all sorts of spaces in which we can meet, socialize, learn and play.

Another thing I often hear is that there are no events or organizations that cater to their own unique kinky needs. While it appears there are a plethora of leather and kink events of various stripes, many of them cater to a more generalized crowd. Sometimes people want things a bit more focused on their niche interests or demographic.

If you're one of those frustrated LGBTQ kinksters or relationship adventurers and you don't see something growing within the scene that you want to have happen, make it happen. Plant those seeds. Don't overthink it. Enough seeds scattered widely enough eventually bring forth growth. Once you witness one of your seeds (or someone else's) taking root, tend to that garden with your money, time and attention.

Famed American horticulturist and botanist Liberty Hyde Bailey once said, "A garden requires patient labor and attention. Plants do not grow merely to satisfy ambitions or to fulfill good intentions. They thrive because someone expended effort on them."

Let's all expend a bit of effort to grow and maintain this wonderful garden of ours.