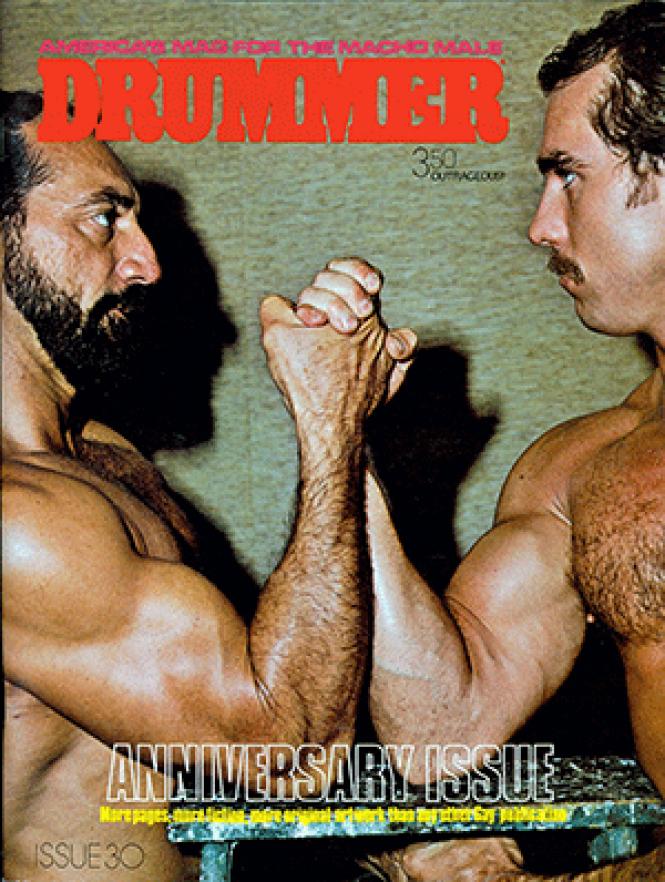 A clichéd tongue in cheek line regarding "Playboy" used to be, "I read it for the articles." Although it is unlikely anyone ever said that about "Drummer," or at least that they only read it for the articles, you could be excused in retrospect for thinking it would be a good reason to pick up the magazine. During its classic period from 1977 to 1979, the magazine introduced the growing leather culture to both San Francisco and the world.

"Drummer" arrived in San Francisco due to the misfortunes of its publisher John Embry. Embry had been involved with the Homophile Effort for Legal Protection (H.E.L.P.), a Los Angeles organization formed in 1968, which helped gays who had been arrested because of their sexuality.

Because of his association with the organization, he had raised the ire of notoriously homophobic police chief of L.A., Ed Davis. On April 10, 1976 Embry was arrested (along with 39 other people, including "Drummer"'s first editor-in-chief, Jeanne Barney) at a charity slave auction for the L.A. Gay Center at the Mark IV bathhouse.

It was a titanic overreaction. Dozens of police, a helicopter and a bus were brought along for the raid. Following the arrests, harassment continued at the L.A. offices of "Drummer." In March 1977, Embry decided to move the magazine to a friendlier city and hired Jack Fritscher as new editor-in-chief.

Fritscher was a natural choice. He had twenty years of experience writing for magazines and had already published five books, among them "I Am Curious" (Leather) and "Whipcrack" (1970), the first leather magazine published in San Francisco. That magazine was intended as a stand-alone publication, but he received such a positive response from it that he could see the appeal in a monthly publication.

In his tenure at "Drummer," Fritscher enlisted artists who would become revered figures including Robert Mapplethorpe, Jim Stewart, David Hurles (Old Reliable) and Robert Opel. He reintroduced many to Sam Steward, who had been writing erotica as Phil Andros since the '60s.

Though Mapplethorpe had done album covers for Patti Smith and Television, it was his lover Fritscher who would provide him the exposure of his first magazine cover with the September 1978 issue of "Drummer."

Chuck Arnett, whose mural at the Tool Box was featured in a 1964 "Life" magazine feature (an article which established San Francisco as the gay capital of the country in many young men's eyes), was also an artist for the magazine during this period. Steward referred to the group of photographers, writers and artists as 'the "Drummer" Salon.' Since Steward knew Gertrude Stein and Alice B. Tolkas, he was someone we should take seriously on the matter of salons.

The rough masculinity of South of Market bars, derived from years of association with gay biker clubs, contrasted at the time with the more manicured clone look in Castro district bars.

It was a heady mix for a heady time, and an incredible achievement if you consider that all of this was a do-it-yourself project. Most everyone associated with the magazine had other jobs and projects that were ongoing at the same time. It was also a very stressful time for the community and the magazine.

Aside from living through the Milk and Moscone assassinations and the Jonestown cult massacre, the magazine's writer and photographer Robert Opel was murdered in his Fey Way Gallery on July 7, 1979. As the year ended in 1979, so did Fritscher's tenure as editor-in-chief. He would continue to write for "Drummer" for the next twenty years (through the sale of the magazine to two subsequent owners, with the final owner moving the magazine to the Netherlands, where it ceased publication in 1999), but the classic '70s period of the magazine had ended.

The Drummer Compound was based on the model of the Playboy Club and included the Drummaster Bar, the Studstore (a leather goods store), a Sweeney Todd Barber Shop, and the membership-only Drummer Keyclub.

The concept of the Drummer Compound seems to have been a misreading of what the leather community wanted, as it folded in less than two years.

Mr. Drummer contests were far more successful, and exist as an international contest till today. The contest survived many moves in San Francisco, going from the Trocadero to the I-Beam and several years at The Woods in Guerneville, only to return again to the Trocadero.

Opening leather bars and starting contests might seem to be beside the point for a publishing enterprise. You would not be alone in thinking this. In a review of Fritscher's Leather Blues for the B.A.R. of June 27, 1985 John F. Karr said:

"Jack Fritscher is an anarchist of Gay sexual prose, the man who invented the South of Market prose style (as well as its magazines, which have never been the same without him)."

Those who appreciate Fritscher's writing and its connection to "Drummer" can explore it further in his two books: "San Francisco Eyewitness Drummer: A Memoir of the Sex, Art, Salon, Pop Culture War," and Gay History of Drummer Magazine" and "Gay Pioneers: How Drummer Magazine Shaped Popular Culture." Both books give a detailed and fascinating history of the magazine and its time in his charming and lively style.