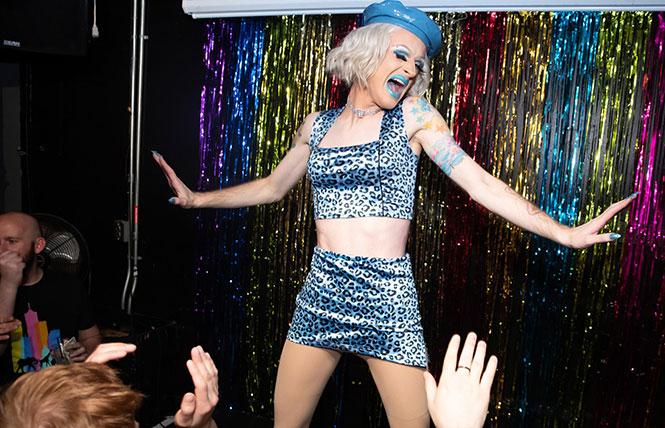 The San Francisco Queer Nightlife Fund is now accepting applications for a second round of grants to those in the city's LGBTQ nightlife community whose income has been impacted by the Covid-19 shutdowns--all bars and clubs have been closed since mid-March, costing scores of bartenders, barbacks, doormen, performers and others their jobs. The fund's mission is to provide some financial relief to the nightlife worker community. Applications for financial grants will be accepted 11:59 PM on May 29, 2020.

To date, the Queer Nightlife Fund has raised more than $180,000 through donations, the bulk of which was paid out in the first round of grants. A sizable portion of the funds were raised by holding online events, such as the Quaran-Tea Dance, which attracted thousands of viewers through Twitch and Zoom.

For many of the recipients, the grants they received have been a lifeline which helps them survive during this period of unemployment. 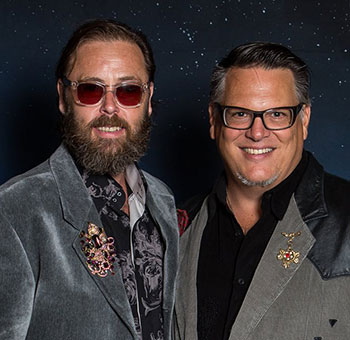 Gooch and his husband William Bulkley

"I lost every single booking I had," said Gooch, a queer nightlife photographer who spoke to Bay Area Reporter about how the shutdown affected him. "At the time we didn't know how long it was going to last. I was hoping for things like Pride and Folsom Street Events, and Dore Alley, these are all events for which I'm the official photographer, and as you are aware all these big events have been cancelled."

Gooch feels that closing down these events was the right thing to do for the sake of people's health but admits that it was devastating to lose all his work.

"It allowed me to have a little bit of breathing room," he said of the grant he received. "It's a financial comfort, and very importantly it means that people are caring like people like me, they care that we've lost our work, they care that we exist, they care that we're part of this community, and they want to help protect us so that when this is over we'll come back and continue the work that we were doing."

Gooch declined to disclose the amount of his grant but admits that it was "generous."

Express yourself
Similar sentiments were expressed by Lindsay Slowhands, a queer drag artist and party promoter in San Francisco. Slowhands is the force behind Hell'a Tight! and Millennia, monthly dance and drag parties at Underground SF and Oasis.

"It means the world, honestly," Slowhands said of the grant she was awarded. "As someone who's primary income comes from nightlife, it's very hard to get by right now being out of work. So receiving even $500 helps with bills and food, the basic necessities to get by during these crazy times."

Slowhands emphasized the importance of the Queer Nightlife Fund.

"The fund is essential for sustaining nightlife," she said. "There are so many queer people and spaces struggling to survive right now. We're all getting as creative as possible because that's what we do, but this, this will make sure that we don't lose what our community spent decades building."

She also addressed the importance of nightlife in queer culture, pointing out that many queer people don't feel comfortable or aren't allowed to express themselves in day to day life.

"Nightlife is a place they can do that," she emphasized. "Nightlife is our home, we've built these safe spaces where we can be celebrated in our individuality and through creative expression."

Community-building
Spencer Watson, Mark O'Brien and Phil Hammack, who are on the steering committee for Queer Nightlife fund told the B.A.R. that those who received grants the first time out are eligible to receive a second grant during round two. The requirements to receive a grant have not changed; being employed in queer nightlife, receiving a significant portion of income from it, and having financial need. Donations were still coming in, they said.

They noted that nightlife is essential to the psychological well-being of many queer people and that it's essential to community-building.

"The experience of queer nightlife is one in which those stigmatized can come together and feel safe to express themselves," they said. "Knowing they are in the company of the larger queer community. Nightlife provides the context for queer people to feel a sense of safety, security, and acceptance, and it also provides a forum to create our culture. Through rituals like drag performance queer people challenge mainstream society's ideas of gender. In the process, they create both art, and cultural critique." 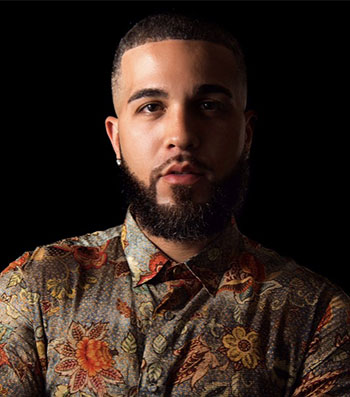 Getting through
For some, it's just about surviving and getting through the pandemic. Christian Gabriel is a gay man who works as general manager of QBar SF on Castro Street. QBar has been closed since November due to fire and water damage, so Gabriel got an early taste of the struggle that the rest of the queer nightlife community is experiencing right now. Since QBar closed, he bounced around between part time and one-off bartending gigs, so he was able to get by. But those income sources dried up with the Covid-19 shutdowns.

"I don't think enough people really understand what financial struggle can really do to a person's mental health," he said. "So much of how our society measures a person's worth is tied to their employment and how much money they make. The uncertainty of how you will get enough to eat, how you will keep your lights and your internet and your phone on, it's a daily crush of anxiety that can really weigh you down."

Gabriel is very grateful for the $1,000 grant he received.

"Every little bit helps," he said. "So for me, receiving this grant means that I can make another month of rent and feel just a little lighter for a little longer."

Gabriel emphasized the importance of queer nightlife, pointing out that many queer people have to create chosen families. Nightlife, he says, offers queers a place where they can unapologetically be themselves and connect with one another.

"At QBar we make it our mission to create an inclusive safe space for everyone, but also in particular for queer and trans people of color, who often haven't felt welcome in the Castro," he said. "Sometimes people regard nightlife work as sort of unserious or low skilled, but we are the literal curators of your entertainment experience. It simply can't exist without our passion and drive and ingenuity and effort." 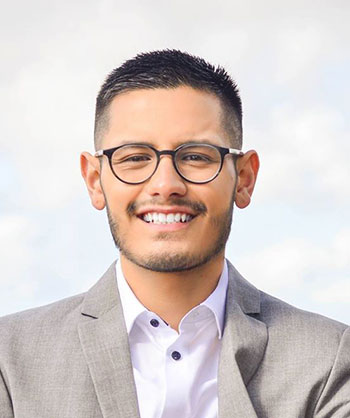 Preserving queer nightlife
Oscar Nevarez, a gay bartender at Beaux, said that he was terrified when his bar closed. The $1000 grant he was given helped him a great deal.

"I didn't have enough in the bank for next month's rent," he tells B.A.R. "I live alone and don't have roommates to maybe help me out, so I was scared. Luckily London Breed did the 'no evictions' policy, which gave me some comfort. This grant is making my life a whole lot easier. I haven't paid April's rent, so some of it will go toward that and some of it towards food and bills."

Nevarez feels that the Nightlife Fund is important in regards to preserving queer nightlife.

"It's absolutely important to see our community come together virtually a few times a week," he said. "Planning events to keep us sane and also raising money to keep most of us afloat. I would say thank you a million times. It's truly beautiful."

Beaux will be fine, Nevarez assures us, and is just waiting for the time when they can reopen.
"Once we have the green light we will be opening that second," Nevarez said. "I can't wait to serve again and see all the beautiful souls of our community come together."