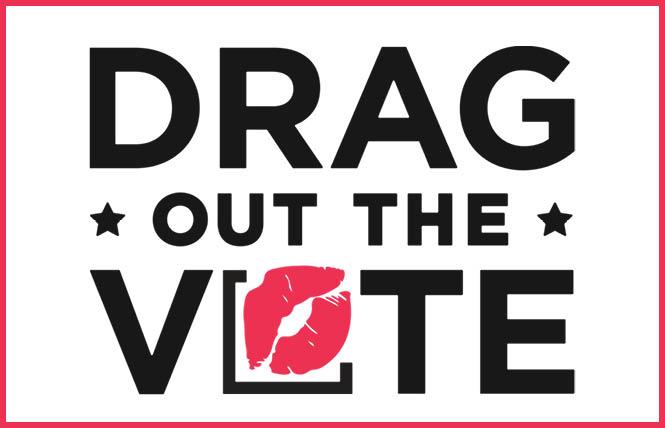 Drag Out The Vote is an official partner of the August 28 March On For Voting Rights taking place in Washington, D.C. and other cities, including Sacramento. Photo: Courtesy Drag Out The Vote

Drag performers across the country will be taking part in a day of action this weekend to protest voter suppression laws being adopted by Republican-led statehouses throughout the South and Midwest. It coincides with the 58th anniversary of the March on Washington where the late civil rights leader the Reverend Dr. Martin Luther King Jr. gave his famous "I Have a Dream" speech in front of the Lincoln Memorial.

The group Drag Out The Vote is an official partner of the March On For Voting Rights being held in Washington, D.C. Saturday, August 28. Staff for the LGBTQ-focused voter education group will be attending the event in person.

And it is asking its drag ambassadors and LGBTQ people concerned about their access to the polling booth to take part in the D.C. event or one of the dozens of satellite marches and rallies being held that day in cities across the country.

"RSVP for the march in your city and then start buying art supplies to make your sign and sashay out for democracy!" stated the group in an emailed invitation for drag performers and other people in its network to take part.

Drag Out The Vote is a nonpartisan, nonprofit organization that utilizes drag performers and activists from across the country to promote voter education, voter registration, and voter activation locally and nationally. As the Bay Area Reporter noted in a story last August, the group recruited official drag ambassadors throughout the U.S. to draw attention to the 2020 presidential election and other ballot box contests in order to drive LGBTQ voters and straight allies to the polls.

According to its first-ever impact report, the organization's drag text banks in 2020 contacted half a million voters and nearly 8 million voters were reached through social media and virtual events. It partnered with 303 drag artists to serve as its ambassadors in 44 states doing get out the vote efforts.

It has remained active post last November's election and grown alarmed at seeing GOP lawmakers in 48 states this year introduce nearly 400 bills that change the rules around voting and election oversight in their states. While the bill proponents claim the laws will ensure safe and fair elections, critics contend the legislation are blatant attempts to suppress voter turnout, particularly in communities of color that tend to vote Democratic. Already the subject of lawsuits, the new rules if left standing could particularly impact tough races for U.S. House and Senate seats in Texas, Georgia, and Florida.

"These laws suppress voting methods that enrich our democracy and even criminalize the distribution of water to voters waiting in the long lines these laws create!" noted the leaders of Drag Out The Vote, adding that the group "has worked on advocating for the Freedom For All Americans Act, a law which would stem the tide on these racist, anti-democratic laws that seek to undermine and chip away at the foundation of our democracy."

But it is highly unlikely that bill or any legislation addressing voter rights will make it out of Congress because of the even split between Democrats and Republicans in the 100-member Senate. The GOP senators are certain to filibuster any voting rights bills, and many Democratic senators are opposed to completely jettisoning the filibuster or altering the rules on when members of the chamber can use the legislative strategy to bottle up bills they oppose.

The upcoming marches will be calling on congressional leaders to send both the John Lewis Voting Rights Advancement Act of 2021 and the For the People Act to President Joe Biden to sign. The events will also call for Congress to send Biden the Washington, D.C. Admission Act making it the country's 51st state.

The House passed the For the People Act, known as H.R. 1, in May on a party-line vote, but a Republican-led filibuster blocked it in the Senate in June. Among its provisions are requiring same-day voter registration on Election Day, which would become a federal holiday, allowing for early voting, and automatically registering eligible voters for federal elections. It also supports D.C. statehood and requires states to draw congressional district lines via an independent commission, such as the one created in California.

Congresswoman Terri Sewell (D-Alabama) introduced the bill named after the late congressman Lewis last Tuesday, August 17, in response to several U.S. Supreme Court decisions that curtailed provisions of the federal Voting Rights Act and limited judicial review of voting rules enacted by the states. The bill, likely to be voted on by the House this week, would establish a way to block certain voting restrictions in all 50 states.

"Both John Lewis and my father agreed that there is no right more central to democracy than our right to vote. It is the cornerstone of democracy, the way we have our voices heard. Congress must pass the John Lewis Voting Rights Restoration Act," stated Martin Luther King III, chairman of the Drum Major Institute, one of myriad co-sponsors of the marches. "Our nation is being put to the test, and we must remember my father's words about the fierce urgency of now."

In California, the Los Angeles-based TransLatin@ Coalition is one of the event's official sponsors. Marches or rallies will be taking place in both the northern and southern sections of the state.

While there were no events in the Bay Area listed on the event page as of the B.A.R.'s deadline Friday, August 20, for this story, a march will kick off at 9 a.m. Saturday in Sacramento from 1315 10th Street.

UPDATE 8/25/2021: After the publication of this column Monday, and the U.S. House Tuesday passing the John Lewis Voting Rights Advancement Act, drag queen activist Sister Dharma Gettin' announced a march will take place in San Francisco this Saturday. Attendees are asked to meet at 5 p.m. at Harvey Milk Plaza in the Castro LGBTQ District at the corner of Market and Castro Streets. After hearing from a few speakers, marchers will depart at 5:30 p.m. down Market Street and end at City Hall.

There are also events planned in the cities of Ventura, Bell, and Fullerton, according to a map of the numerous marches and rallies being held nationwide that day.