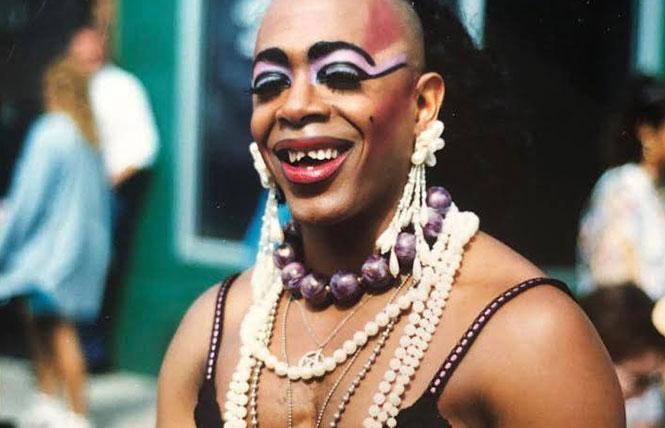 A wild and varied history of political campaigns runs through the LGBTQ world; José Sarria's run for San Francisco Supervisor in 1961, Frank Kameny's run as the first gay candidate for congress in 1971, and the well-documented campaigns of Harvey Milk in the '70s. Many of the campaigns were intended to emphasize the political clout of the community, and often they were intended to increase visibility.

Joan Jett Blakk's campaigns for mayor of Chicago and San Francisco —and for President— were never really about attaining political office. But there's no question that they increased visibility and generated a good deal of positive press in a very bleak time. 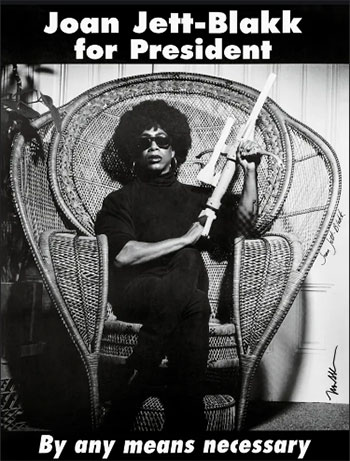 Terence Alan Smith began performing in drag in Detroit in 1974, calling himself a blend of Divine, David Bowie and Grace Jones. By 1991 he was living in Chicago and was one of the founding members of Queer Nation Chicago. It was in Queer Nation Chicago that Smith became Joan Jett-Blakk and ran a write-in campaign amid the reelection campaign of Richard M. Daley. Daley was initially elected in 1989 and his reelection was such a given that the campaign was generally perceived as a pretty dull affair, so Blakk added an element of fun to the race.

Queer Nation Chicago formed in September 1990 with goals that included visibility, identity and freedom. They were born in the bleak atmosphere of the AIDS epidemic, where homophobia and violence had followed on the heels of the disease and challenged the prevailing attitudes of the era by pointing out that we weren't all dead and were not going to sit around and be morose in anticipation of death.

It was in this crucible that Joan Jett-Blakk was born. In a cover story from April 11, 1991 the Chicago alternative press magazine New City celebrated Daley and Blakk as the king and queen of Chicago. Blakk told the magazine:

"We just wanted to increase gay visibility and fight a rising homophobia here in Chicago, but do it in a not-so-tense way that everyone could have fun with."

There is no doubt that Blakk was successful. With slogans like "Chicago Needs A Queen" and campaign promises to turn the police into the fashion police and dye the Chicago river pink on Fridays, he added joy to what would have been an otherwise dull campaign. He even kissed a Chicago cop in a police car (at the prompting of the cop's partner), an act that sadly still adds an element of anarchical risk to that humor.

On top of the humor, it's estimated that Blakk won several thousand votes, although this was never documented by the board of elections. 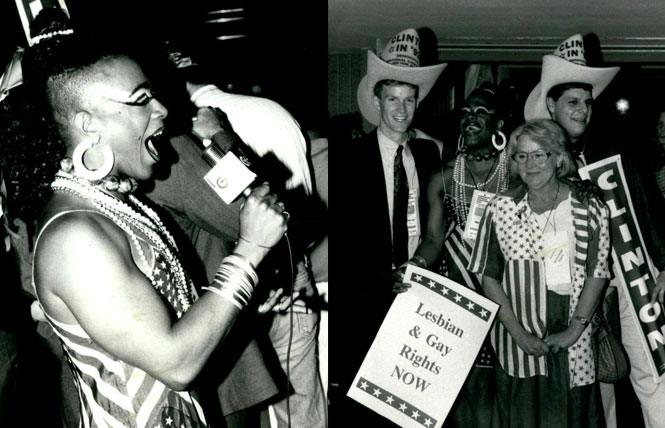 Blakktivism
A testament to the success of Blakk's campaign came in 1992, when Blakk marched with Queer Nation in Chicago's St. Patrick's Day parade. At a time when gay contingents were being kicked out of parades in Boston and New York, they were cheered and Blakk was name checked by the crowd.

When you've successfully become Queen of Chicago, what's next? Clearly, a run for the presidency! On January 17, 1992 (his 35th birthday, which made him eligible to run) Blakk announced his write-in candidacy for president as a candidate of the Queer Nation Party.

With campaign promises to make the White House the Lavender House and have Dykes on Bikes provide national security, Blakk also had prescient notions like enacting national healthcare and (as quoted by Tracy Baim in Outlines: The Voice of the Lesbian and Gay Community) a drug policy of, "Legalize everything, tax the fuck out of it, and erase the national debt." The campaign had the slogan "Lick Bush in '92."

If there were any question that Blakk's campaign increased visibility (and fun), that should be erased by the fact that his appearance at the Democratic National Convention in 1992 was documented by no less of a publication than the New York University/MIT Press journal TDR: The Drama Review.

The article covers Blakk's transformation into red, white and blue flag drag in a bathroom at the convention, as well as a press conference at the Limelight nightclub (with pictures of Blakk speaking from a podium festooned with posters of his likeness and the phrase, "If a bad actor can be elected president, why not a good drag queen?"). The TDR article notes that, "Joan hands out literature, scares the be-Jesus out of several seated delegates, and brings smiles to the faces of many another." 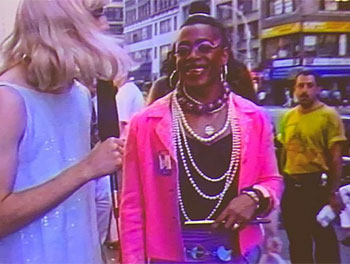 Go West
In 1993, Terence Smith moved to San Francisco, telling Owen Keehen in Outlines, "I do not want to see another snowflake in front of my nose as long as I live." In San Francisco he launched Late Nite with Joan Jett-Blakk initially at the Kiki Gallery with Steve Mounce as his co-hostess Babette and eventually at Josie's Juice Joint and Cabaret.

But the world of politics would beckon again in 1996, when he ran against Bill Clinton with the motto "Lick Slick Willie in 96." In an article in the SF Weekly that year, he was quoted as saying, "When I'm elected president, we're gonna use stadiums for what they should be used for: lions and Christians."

Blakk promoted his fiscal belt-tightening by saying that since he was both the president and first lady, the country would save money. It was during this campaign that Blakk promoted his candidacy with a poster of him seated in a rattan chair with the caption "By Any Means Necessary," which appropriated both the image of Huey P. Newton of the Black Panther Party in a rattan chair from 1967 and the title of Malcolm X's speech. 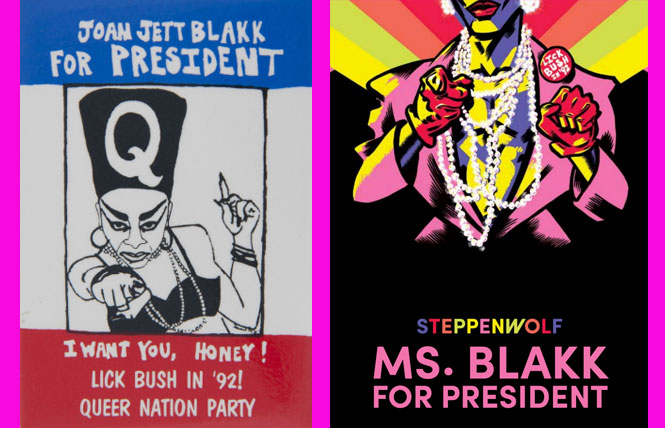 And who is to say that Blakk's image was not the more threatening? Though the Black Panther's Minister of Defense Newton might shoot you, you had no idea where Blakk would stick that gun.

I asked Smith/Blakk about the appropriation of the image and he replied, "I thought it would be fun to fuck with the Black Panthers a bit. They weren't known for their stance on gay rights, so I felt like updating them a bit."

Blakk's final campaign was for Mayor of San Francisco in 1999. Unfortunately, he did not use 'Lick Slick Willie in '99' as a campaign motto. A colleague of Blakk's told the Bay Area Reporter's Wayne Friday that he would definitely enter the race, until or unless either Tom Ammiano or Carole Migden entered the race.

I asked about this run, and if he dropped out and he said, "Yes. I'd been a big fan of Willie Brown, but he said some stupid shit about not being rich enough to live in San Francisco and I just lost it. Tom, who is a friend, entering the race made it a much more serious race, so I dropped out."

The echo of Joan Jett Blakk's foray into politics has had some impressive cultural impacts. In 2018 the Illinois History and Lincoln Collections featured Blakk's candidacy on their site in honor of LGBTQ Pride month. In 2019 Blakk won the Queer Art Prize for sustained achievement from the New York nonprofit Queer Art. The same year Tarell Alvin McCraney and Tina Landau staged the play, Ms. Blakk for President, at Chicago's Steppenwolf Theater. It was reviewed by both The New York Times and The Chicago Tribune. 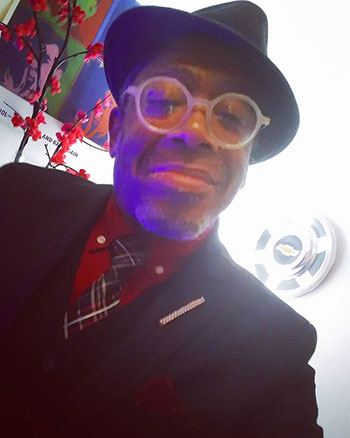 Regarding the tributes, Smith/Blakk told me, "I am humbled by all this attention. Who knew that wanting to stir shit up and inject some thoughtfully ribald humor into politics would be recognized thirty years later? It blows what's left of my old mind!"

I asked for Blakk's solution to the current environment and he said, "Vote. We have never been up against anything like this and we must stop it before it gets any worse."

Blakk's candidacies were write-in campaigns that may be seen as marginal by some, but I view them in a different light. At a time of great distress and hopelessness, he added a spirit of joy to what had been particularly dire times.

There is a great deal of power in that. It's worth reflecting on in the midst of another epidemic. The ability to appropriate and reimagine cultural iconography is powerful and should give us hope and tools for change.