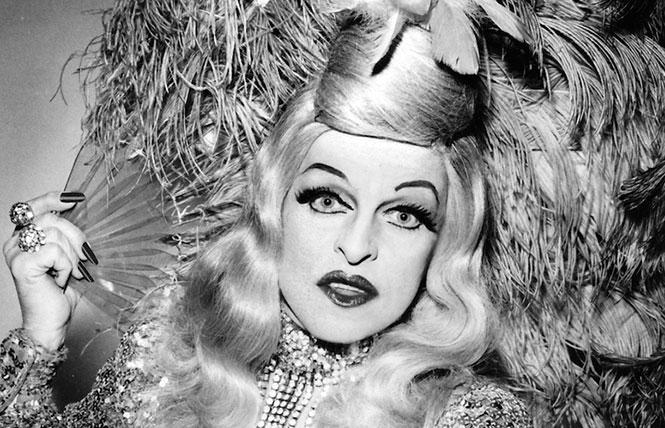 Charles Pierce's connection to San Francisco history is easily lost due to his larger than life personality and his talent. By the time I moved here in the 1980s, I mistakenly thought of him a community icon, but not as someone whose career was strongly linked with the city.

Pierce was born in Watertown, New York in 1926 and began radio work before moving to the West Coast. In 1946 he became a student at the Pasadena Playhouse, where he studied acting. The first few years of his career found him at loose ends, struggling for a direction.

In the early '50s he saw a performance by Arthur Blake, a popular female impersonator who interpreted Hollywood stars like Bette Davis. Pierce wrote material for Blake, but it was rejected. Blake's loss was our gain - Pierce went on to begin performing at Café La Vie in Altadena on September 27, 1954 and never looked back. 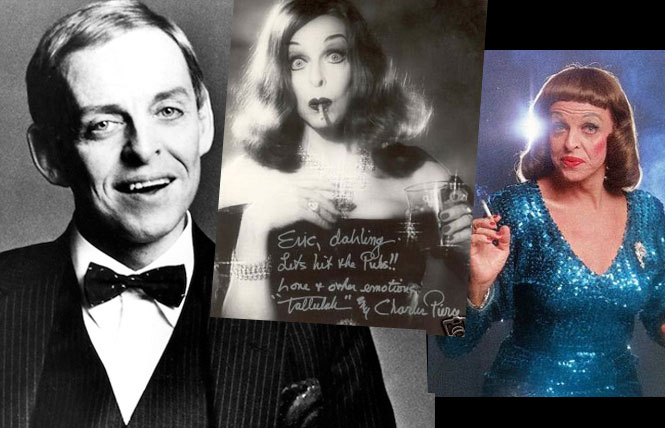 Charles Pierce in a tux, as Tallulah Bankhead and Bette Davis.

Patrons who saw Pierce's act in the '50s and early '60s saw a very different show from what developed once he donned a dress. In the '50s he performed in a tuxedo and used a box of props (including wigs and feather boas) which he used to assume characters. There was a good reason for this - you could get arrested for being in drag, as he learned early on.

On Oct. 31, 1954. Café La Vie was raided and five men were arrested for impersonating females. All were found guilty. One was a high school math instructor who nearly lost his job. Pierce told Boulevards magazine in 1979 that as he was dressed as Caligula in a toga (with sequins that read "eat at Caesar's" on the back) he was not considered to be in drag and was not arrested.

Fortunately for the world, Ann Dee of Ann's 440 (440 Broadway) saw Pierce at Café La Vie and offered him his first performance in San Francisco on September 1, 1956. He was back the next year and was described as a mimic, a comic and a "very clever pantomime artist" in the Chronicle.

By the '60s he was starring at The Purple Onion together with a co-star, Rio Dante, and an act called "Les Moppets." Pierce and Dante performed with their heads on top of a puppet stage. The puppet bodies neatly got around the question of cross-dressing on stage.

The Purple Onion shows were a success, and in April 1963 Pierce and Dante were invited to audition at the Gilded Cage (126 Ellis). In 1990 he told B.A.R. reporter John Karr:
"We did our material before the ten or so people seated at the bar on a Monday, opened on Tuesday and stayed for six years....That's when I started working more in thrift shop drag." 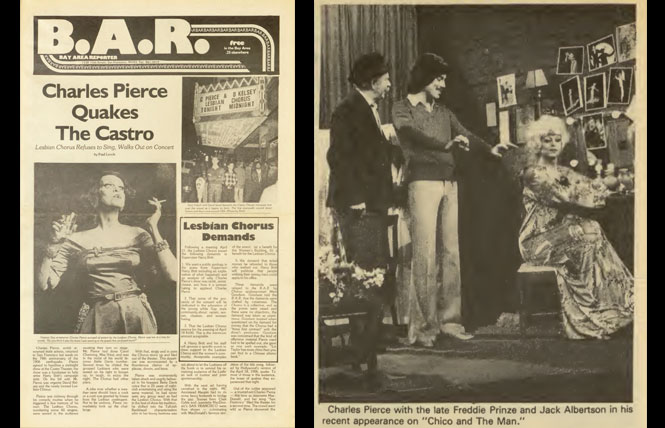 It was at the Gilded Cage that Pierce's cast of characters Bette Davis, Mae West, Eleanor Roosevelt and more became complete. It was also here that his reputation spread through word of mouth in the gay community (there was no advertising for the Gilded Cage shows). Although the bar is often described as a Tenderloin bar, it's important to remember that it was one block off of Powell Street and therefore drew a lot of performers from the theater district as well.
Pierce told the B.A.R.'s Michael Lasky in 1984:
"Probably one of the highlights of my career was when Angela Lansbury, who was appearing in Mame, came by to see the show. We put on the record of Mame for a 20-minute pantomime and Angela got up on a chair and joined in. For the sheer excitement we created that was an unforgettable night."
Pierce also took part in all that San Francisco had to offer in the '60s. He was at the party in the Haight where Rudolf Nureyev, Margot Fonteyn and Michael Greer were arrested (although he took a different route out of the apartment and was not arrested). Herb Caen (who often mentioned Pierce in his columns) noted that Nureyev and Fonteyn were at Pierce's performance at the Gilded Cage the following night.
When the Gilded Cage closed in 1969, Pierce went on to star with Carol Doda in the play Geese at the Encore Theater. It was a very '60s affair, with semi-nude cast members distributing daisies to the audience. The play was directed by Philip Oesterman (better known for Let My People Come). Geese was not Pierce's only theater work in San Francisco - in 1974 he would appear as Margo Channing in Applause at California Hall. 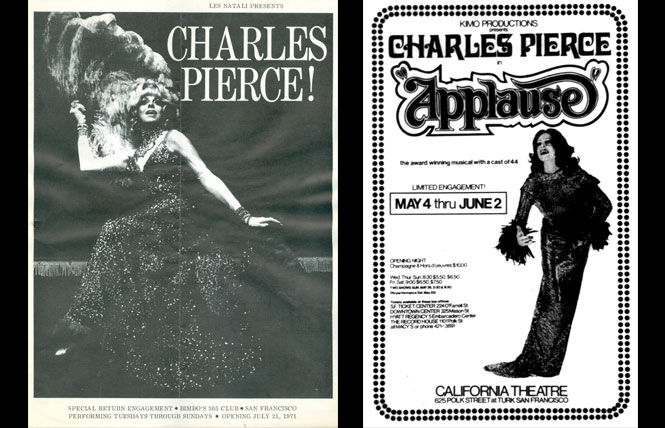 Pierce's breakthrough performance came in 1971, when Les Natali booked him for a series of performances at Bimbo's. The performances were recorded for a live album which gives a feel for his performances even today. It was around this time that he made it known that he did not want to be called a female impersonator. In 1971 told the Examiner:
"I don't like the term female impersonator, since I'm not a drag queen. I call myself a male actress. But what's wrong with just plain impersonator?"

From Bimbo's he went on to an extended performance at Manhattan's The Village Gate, for which he won a special Obie award and then made the hop across the pond to a ten-week engagement in London. Television followed and he appeared on shows through the '70s and '80s which were as diverse as Chico and the Man, Love American Style, Laverne and Shirley, Fame and Designing Women.

He did not forget the city that launched him, however. He performed here frequently including at The Plush Room and The Venetian Room (which he called "the men's room at The Vatican"). He also did several benefits in town, including one for "Save Our Human Rights" during the Anita Bryant campaign and for the Gay Men's Chorus.

It was at a benefit to retire Harry Britt's campaign debt at the Castro in 1980 that his act ran up against changing community attitudes. After a joke about Elizabeth Taylor's weight (with an ethnic comment thrown in) the Lesbian Chorus, who was due to perform, walked out of the performance.

It was also in the '80s that he began to be questioned about whether his show was out of date. In typical Pierce style, he turned this complaint on its head. He titled his 1990 show at the Plush Room The Legendary Hollywood Ladies: All Talking, All Singing, All Dancing, All Dead.

Although he threatened retirement several times, it seemed to only give him repeated opportunities to stage comebacks (to the delight of his fans). When he died in 1999, the actor Michael Kearns remembered a line he delivered at Ciro's on Sunset Strip which sums up the message of his work: "If a person can't be what they are, what's the purpose of being anything at all?"