Christmas With Connie: Connie Champagne brings Judy Garland back for a holiday concert at Martuni's 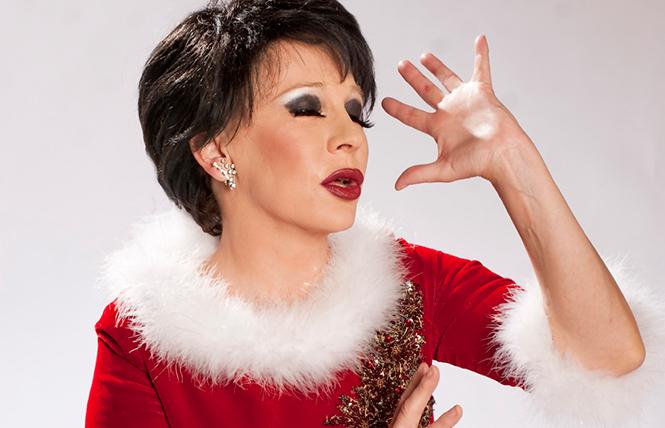 On Saturday December 21, cabaret chanteuse Connie Champagne returns to Martuni's to perform a Christmas concert as the iconic Judy Garland. Playing Garland has been a big part of Champagne's singing career. She has become an expert at channeling Garland's body language, mannerisms, and yes, even her voice. As she shared with the Bay Area Reporter, she didn't start out as a Judy fan, but rather joined the Cult of Garland later in her career.

"Years ago Allen Sawyer cast me as Judy in Artfull Circle's Christmas With the Crawfords," Champagne recalled. "I was not a big fan or anything at the time, I was more of a David Bowie/Iggy Pop fan. But as I learned more about her and studied her movement in her performances, I was particularly moved by her honesty and vulnerability, the way she looked directly in her audience's eyes, which I connected with Iggy, too. I guess like Johnny Depp was inspired by Keith Richards for Jack Sparrow, I was inspired by Iggy to connect to Judy. I know that sounds funny, but it's true." 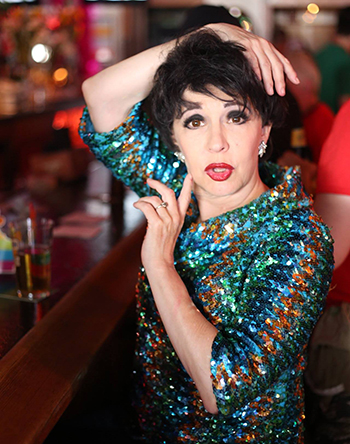 Champagne feels that it was Garland's vulnerability that made her resonate with so many people of that time.

"It takes courage to make yourself vulnerable," Champagne said. "Children have always been mesmerized by Judy Garland, they truly loved her, and of course, many gay men in the 1960s took her as their mascot. I think it's because when she sang, she touched their hearts."

Garland of course had a very strong connection to gay men, and still does. Champagne feels that there's a "camp" element to this, but also thinks that the connection goes beyond camp. Champagne recalls reading an Esquire Magazine quote from 1969: "They (gay men) are a persecuted group and they understand suffering. And so does Garland."

Champagne pointed out that Garland loved the guys who celebrated her.

"I'm told that at a 1965 press conference in San Francisco, she was asked if she minded having a large gay following," Champagne said. "And she told them, 'I couldn't care less, I sing to people.'"

When she takes to the stage at Martuni's, Champagne promises to perform Garland's greatest hits.
"I have to; it's Christmastime!" she exclaimed.

She'll also be doing some of Garland's more obscure holiday songs, and even some songs that Garland never sang, but should have. She'll be performing a duet with Lambert Moss on a rather famous tune that Garland performed with Barbra Streisand. The show promises to be filled with plenty of good humor. 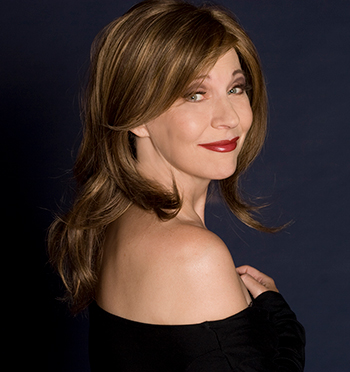 "Judy was funny," Champagne said. "Her daughter Lorna Luft told me that, and it's true. She had such an irreverent sense of humor, which you can see on her 1960s television show, and in concert footage."

Champagne noted that some of Garland's humor was on display in the recent biopic Judy starring Renee Zellweger.

"I don't think they allowed Zellweger to go far enough or deep enough," she said. "In real life Judy was far more outrageous. And sadly, in her later years, she was physically a wreck. You don't see that in the film at all, really. But it's still a good performance even if it is kind of Judy-Lite."

"I think we all have broken hearts from time to time," Champagne said. "Watching Judy makes us feel less alone, especially at Christmas."

Champagne promises that a good time will be had by all who attend Have Yourself A Merry Little Christmas.

"There's something about the holidays, and Christmas in particular, that people associate with Judy Garland," she said. "I'm working with Tammy Hall, who is a brilliant pianist and arranger, and Allen Sawyer, who wrote much of the dialogue, is terribly witty, so it's fun, and it's funny!

"Our hope is that even if you hate Christmas, folks will have a great time, and maybe rediscover some of the love and light that the holidays are supposed to bring. Who knows? You might just find your long-lost Christmas spirit!"