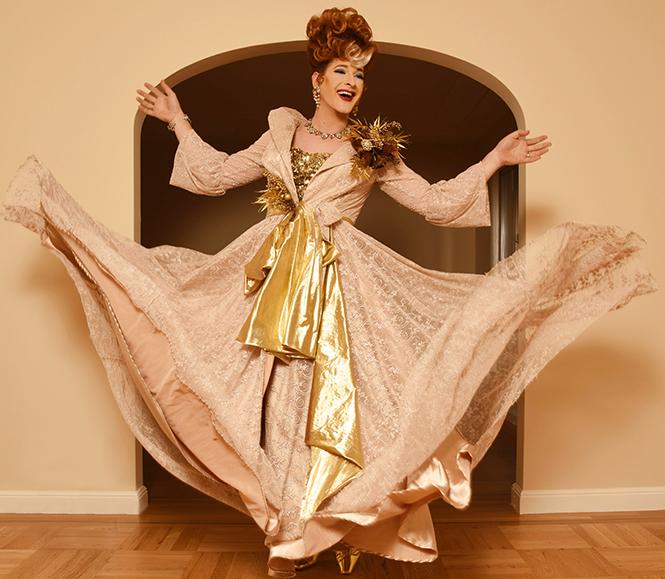 The Countess Katya Smirnoff-Skyy returns to Feinstein's at the Nikko on December 19 for a three-night stand in which she will usher in the holidays with songs, stories and strong cocktails designed to make your Yuletide gay.

Katya was created around 15 years ago by actor J.Conrad Frank, who tells the Bay Area Reporter that Katya is an amalgamation of two people.

"I was an opera singer once upon a time," Frank said. "Everyone in classical music knows at least one vaguely Eastern European lady who seems to have had a very glamorous life at one point. There's little evidence of that now."

Frank describes Katya as "a lady of a certain age" who was born in the Soviet Union and moved to Paris when she was 17, where she married a 78-year-old count who died three months later. From there, Katya evolved into a lady who approaches popular music as a middle-aged classically trained Russian lady might. Katya has since developed quite a following and is, in Frank's words, "quite beloved."

"I like to think of her as your favorite drunk aunt at the Bar Mitzvah that you think is the most glamorous person in the world," said Frank. "She can speak to everyone. It's very much in the vein of classic drag theater like Charles Pierce or Charles Busch, with a little bit of Varla Jean Merman and Justin Vivian Bond for good measure."

Katya has become a Christmas fixture in the Bay Area, with this year marking 13 years since the holiday spectacular was first performed.

"It's ironic that she does this big Christmas show," Frank said. "Because she is in fact Jewish, well, she converted to Judaism. If there's a holiday where people drink four glasses of wine, sign her up. She sings 'Eight Nights Only' to the tune of 'One Night Only' from Dreamgirls —in a minor key of course— which makes it terribly appropriate as a Chanukah song." 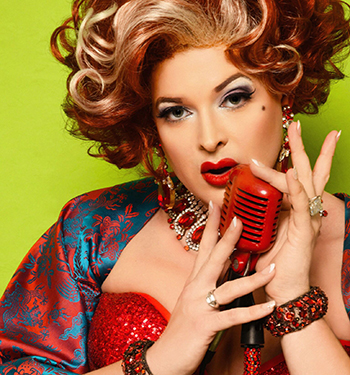 In Katya! A Holiday Spectacular! Katya, a holiday hostess, welcomes the audience into her home. She will tell stories from her life and sing songs. Those stories will include the tale of her failed appearance at Radio City Music Hall where she was asked to sing "The Carol of the Bells" and ended up doing something quite different. Towards the end of the show Katya, gives out gifts of things she has acquired over the course of the year but no longer wants.

"The gifts speak to me and they tell me who they want to be given to," Frank said.

Songs during the show will include revised 'classics' like "Stalin, Baby" and a vast medley of songs from Christmas television specials.

"Everything from classic carols to Katya's version of 'Proud Mary,' which is of course the tale of the Virgin Mary on her way to Bethlehem," quipped Frank. "It's a special number. People ask me all the time why I do the same material every year, but I change it, things change. But should I cut songs that have become part of people's holiday traditions? They keep coming, so I'll keep doing it."

Frank is a local boy, hailing from San Mateo. In his younger years he studied architecture and music at the University of Oregon. He recalls seeing a lot of classical singers who worked very hard and stressed themselves out, and decided that this was not how he wanted to be.

"I've always been of the philosophy that life isn't about lyrics or rhythm, these are just suggestions from the composer," he said. "Music should be something that's enjoyed, something that makes people laugh. So I created Katya as an outlet to do the kind of performing and the kind of singing that I wanted to do. Everything from classical music to arrangements of Taylor Swift, or The Beatles or Nirvana. There's something for everybody in a Katya show."

Frank has a long history of performing in Bay Area theaters, both in and out of drag. He's done plays at New Conservatory Theater and most recently played the Narrator in Ray of Light's production of The Rocky Horror Show. He considers himself an actor first and foremost and strives to bring an emotional core to his drag performances.

"At a Katya show, you'll laugh a lot, but sometimes you'll get teary as well," he said. "There's a lot of heart to Katya, because any great comedy comes with depth as well. And I think that's one thing I do that's slightly different from most quote unquote 'drag acts' that are out there today. What I do is theater-based, character-driven performance."

When Katya takes to the stage at Feinstein's, she'll be accompanied by a band of six. Frank says that there will also be several elves who help Katya out.

"It's fun," Frank promises. "If you can't be sparkly at the holiday season, then what's the point?"